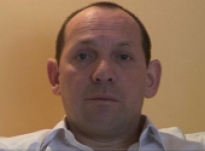 Age at interview: 41
Age at diagnosis: 28
Brief Outline: Diagnosed with Hodgkin's disease in 1992 after finding a lump in his armpit. Treated with surgery and radiotherapy. Recurrence treated with chemotherapy and autologous and allogenic stem cell transplants. In remission.
Background: Professional pilot, married with one child aged 7. Ethnic Background: White English.

One day while working on board ship for the Navy, he found a lump under his arm while showering. When it was still there a couple of days later he showed it to the ship's doctor. Once on shore he visited a doctor at the Naval base who organised tests. A biopsy showed that he had Hodgkin's lymphoma stage 1A. He was immediately grounded from flying and started treatment. The lump was removed surgically followed by radiotherapy to his armpit, chest and neck.
After being in remission for 8 years his disease returned. This time his symptoms were weight loss, tiredness and night sweats as well as visual disorientation when flying. The initial assessment was non-Hodgkin's lymphoma and he was started on chemotherapy for that (CHOP), but subsequently it was reassessed as Hodgkin's lymphoma and he was changed to a different type of chemotherapy. Unfortunately the disease did not respond so he went on to have an autologous stem cell transplant which put him into remission for about 18 months before relapsing again. This time he was given an allogenic transplant using his sister as donor. He has been in remission ever since.

Only his wife and daughter know the full extent of what he went through with his lymphoma...

Only his wife and daughter know the full extent of what he went through with his lymphoma...

View topic summary
SHOW TEXT VERSION
EMBED CODE
PRINT TRANSCRIPT
You haven’t really told me about the emotional impact of the diagnosis and the illness on you and your wife. Do you want to talk about that at all?
For me, from my point of view it really, and a lot of people were quite surprised by this, to me it’s a non-event other than that time when I felt lonely when I was going in for my transplants. I don’t want to sound blasé about it but I just, to me it’s just another problem, get on with it, crack on with it. My personality is, I’m sure you can tell from how I’m talking, is one where I just' I see something, what needs to be done? Let’s do it, let’s do that then, get on and do it, right that’s now done, what else do I need to do? Don’t need to do anything else, okay fine. I just get on and do something.
And I’m really, at no stage was I scared for me. I was terrified at times about the prospect, you know, the effect it had on my family. And even today, you know, it’s six years on nearly, and I still occasionally sort of think back and think, “What have I done to my daughter? What have I done to my wife?” We’ve only been married eight years; for six of them I’ve been putting her through all sorts of nonsense. So that’s the biggest impact, and it did affect my wife, you know, it has affected her definitely. But I can see a change now for the better. I’ve returned to flying and that really has helped her in her sort of recovery from the whole thing. She sees that I’m now doing something, back doing what I love doing, which is flying. I’m well, I’ve still got a long way to go to get properly better, because having a bone marrow transplant the immune system’s, they said, you know, for the next five years it’s going to be a case of building and getting it right again, and that will take time before it’s fully sorted. Well I don’t think it will ever fully function properly but it’ll be a lot, you know, it’ll be a lot better than it is now. So there’s still a bit of physical repairing to be done.
But yeah, it did affect my wife, and that can’t, that really can’t be, I mean that’s something that is really not considered to a great degree in the whole process, is the impact on those really close to you. And it really is only my daughter and my wife where this really heavy impact, because even your parents, even my parents and my wife’s parents, we sat down at length, talked about this, my wife and I, you see nobody, not even my closest friends really know what we’ve been through, because when we saw our friends in between treatments, and saw our family in between treatments, that’s the only time we saw them, I was in between treatment and actually okay, and feeling okay. When I was really unwell and poorly with treatment we were like hermits, we just stuck ourselves away and get on with it.
And my wife was helping me and my daughter too, and every, I used to think about it when people said “Oh you’re looking so well”, you know, “You’re looking much better, you’ve got no hair but you’re looking well”, and I’d say, “Yeah well that’s right. The reason you’re seeing me is because I feel okay at the moment. When I’m not well, not feeling great, I’m not going to be around”. And that used to sort of bring a little wry smile to my face when I saw my friends and family, because they never really, nobody outside of my wife and my daughter knew the real impact of what was going on for any of us.

After feeling disorientated when flying he went to his GP and discovered that his lymphoma had...

After feeling disorientated when flying he went to his GP and discovered that his lymphoma had...

View topic summary
SHOW TEXT VERSION
EMBED CODE
PRINT TRANSCRIPT
And the treatment was successful at the time, I was in remission, I was in remission for eight years, and very disappointingly, and also quite devastatingly, I relapsed in August, yeah August 2000. Stage 4b this time, absolutely everywhere, and that was a massive shock. It was, I was married at this stage, I was out of the military, out of the military and in commercial aviation, so my life had moved on quite considerably since that time, and also the disease had really ripped into me and I hadn’t really realised it, but when I look back at the symptoms it all fell into place when I was diagnosed. Subtle things like losing weight that I thought, “Well I’m just getting fit”, because I was doing a lot of exercise at the time, but what it was actually I was eating like a Trojan and it was, nothing was, I wasn’t putting weight on, it was quite a, I don’t know, it was a subtle thing initially. And then I realised that I wasn’t feeling well, I was feeling tired, I was feeling listless. I also started to get the occasional night sweat. And when I pieced everything together in a big pot, so to speak, it then pointed at the disease again.
But it took, I was actually flying at the time when I thought I’d better go and see the doctor. I was descending into an airfield in Turkey, and we were going through cloud, the lights were flashing against the cloud, as we descend through the cloud, and I got disorientated and in nearly twenty years of, well twenty years of flying I’d never been disorientated in my life, not in the way that I was experiencing anyway. So it was a bit disconcerting. I spoke to the other pilot and told him that I was experiencing this disorientation, and it was fine, it wasn’t dangerous, I just felt slightly off. So I just said, “Well I’m working through it, I’m still on instruments and everything’s fine.
We descended, we landed, no problem whatsoever. Now if it had got worse I would’ve just handed control over, but I didn’t think anything much of it. I had a little bit of stomach pain at the time and I just thought, you know, “It could be airline food or something”. But that was starting to hurt, and when I got back I went into the simulator for another bit of training and then I got similar disorientation again with some of the lights in the simulator and the different visual cues that I had, I got disorientated again, I felt funny, I felt like I was getting a sort of fluey type sort of feeling as well, and just everything I thought, all the other things combined I just thought, “Oh well I’ll go and see the doctor and see what’s going on”. And I had a little doubt in my mind whether this had come back again.
So then that was it. I went to the doctor, he actually found a lump in my shoulder area which I hadn’t even noticed. And they whipped that out, did a biopsy and it was the disease again. Also the scan showed it everywhere, absolutely everywhere' it was in my liver and my spleen, not in my lungs that time, subsequently I did discover it in my lungs, but all through my lymph nodes throughout the whole, everywhere above and below the diaphragm, so it was quite extensive disease.
And started the treatment, and that was it really, I just kicked off on, in fact they initially diagnosed me with having non-Hodgkin’s because the type of Hodgkin’s that I had, I think it was, it was a type that could be quite easily confused with non-Hodgkin’s, so lymphocytic, histiocytic, something like that, it was. I started getting treatment for non-Hodgkin’s first of all, and they stopped that because a very renowned professor looked at my slide again and looked at the pathology of the biopsy and said, “Actually no it&rsq
Previous Page
Next Page