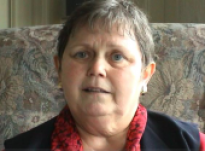 Ovarian cancer is often called a ‘silent killer’ but she disagrees as she feels that she had symptoms for about four years before her diagnosis. For instance, she felt easily fatigued, was having problems with bladder incontinence, was gaining weight and was experiencing pains in her legs, which may have all been related to the cancer. Just before she was diagnosed her abdomen became very large due to the tumour.
She was diagnosed following a CA125 blood test (which picks up ovarian cancer tumour markers in the blood) and an ultrasound. She was initially in denial when she was diagnosed.
She was treated by surgical removal of both ovaries, chemotherapy, followed by a hysterectomy and further chemotherapy. She received her chemotherapy as part of a clinical trial. The hysterectomy caused her to go through the menopause, for which she was prescribed HRT. Other side effects of the chemotherapy included nerve pain and pins and needles in her arms and legs. She also lost her hair, but felt that was OK as her daughter helped her shave it off.
Following her diagnosis she became involved with an ovarian cancer charity called Ovacome, which provides information about ovarian cancer and it’s diagnosis to the general public and health professionals.
She experienced a cancer recurrence 4 months after her treatment, which was diagnosed by an elevation of the CA125 tumour marker in her blood tests.
Complementary therapies such as reiki, reflexology and eating a diet based on her blood type helped her maintain positive energy. She also felt that praying gave her a lot of strength when she was feeling especially poorly. She found it quite difficult to talk to her elderly mum about her cancer, but felt that her Macmillan nurse was ‘brilliant’ in helping her discuss the cancer with her mother. She has started a local cancer support group focussing on gynaecological cancers.
As a result of having had cancer she does feel that she has slowed things down a bit in her life. For instance she doesn’t feel that there is a need to rush about, and tries to enjoy each day as it comes. She’s also given up her full-time job, which has given her a bit more free time.
She has had discussions about how and where she would like to die in case the cancer starts growing again. It’s important for her to build happy memories for herself and others for after she is gone. She does experience quite a lot of pain, and is on morphine to help control it.

Knowing that she will soon die from her ovarian cancer she held a ‘pre-funeral’ party to mark...

Knowing that she will soon die from her ovarian cancer she held a ‘pre-funeral’ party to mark...

View topic summary
SHOW TEXT VERSION
PRINT TRANSCRIPT
Right. Since I’ve celebrated my five year anniversary, it seems to have been a milestone, and since then people have been coming to visit me more. The GP has started coming to the house just to call in to see how I am because she is concerned about the stage that I have reached. And the Macmillan nurses and the oncologist, they are all concerned about the stage I have reached as well. And in fact a few days ago I had to go onto the ward, I was captured by the oncologist, she wouldn’t let me go home because I was in denial about the pain that I was in. And so I was taken on the ward for several days and I’ve started on a regimen of morphine. So with this regimen of morphine comes a lot of mental pictures because people immediately think, ‘Right, you’re on morphine you must be getting nearer to the end’, I mean although it’s just being used as a pain control it’s obvious from the nurses reaction that that’s how they are treating me. But the only way I can treat it is by saying, ‘Okay I’ll let the morphine do the job that it’s got to do, but my job is different, my job is trying to leave memories for the rest of the family’.
We had the party and that was absolutely wonderful, it was on a beautiful day and lots of people were here and we had wonderful food and wonderful conversations, and as I pointed out on the day, this day was, I didn’t see why they should have a party at my funeral and I can’t see what’s going on, so it was a pre-funeral party that we could all enjoy and all enjoy each other’s company, so when the time does come for me to have a funeral, people will know each other and be able to talk to each other, and they will be able to have that memory. So that to me will be lovely that they have got that memory.
And the other thing that I am trying to do is build memories in the garden, because nothing else needs doing to the house, so if we can build memories in little corners and plant different things in the garden, and people have got a birthday coming up, so they want to plant plants, we have had it designed, so they want to come and put plants in, so it becomes everybody’s little bit of space, so that’s at home I’m doing that. And also I want to go to places, go to places with different people in the family, go away and have special weekends, buy little bits to bring back to remind people of really, really nice times.
So this summer it’s a building memories summer, and I am looking forward to it, you know, I want to do as much as possible and cram in as many things as possible, because I feel over the last year, well, you know, areas have been neglected and peoples lives will go on when I’m not here.

During her remission from ovarian cancer she had regular blood tests for the tumour marker CA125;...

During her remission from ovarian cancer she had regular blood tests for the tumour marker CA125;...

View topic summary
SHOW TEXT VERSION
PRINT TRANSCRIPT
It was a bit of a shock when the cancer came back again, because I was on cloud nine. I thought that was it, I’d cracked it, and I’d gone so long that, you know, it couldn’t possibly come back, so again that feeling of denial crept in.
How did they know it came back? What was the sign?
What was the signs? Right, yes of course, I mean during the period of remission the hospital monitors how the cancer is behaving by giving CA125 tests, and we got to the stage when we had gone from one month, two months, three months, four months in between tests, and that’s when it came back, when we had just got about as far as four months.
The count went up and then we had to sort of look to see what sort of chemotherapy to have, and again I opted to go on the trial, the ICON4 trial. And with that one I was given cisplatin simply because with the carboplatin I’d had the beginnings of an anaphylactic shock the time before when they had tried to give me an extra one, so I went into hospital each time and had cisplatin, which I was given on the ward.
Previous Page
Next Page