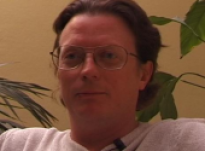 Age at interview: 45
Age at diagnosis: 40
Brief Outline: Testicular cancer diagnosed in 1996; orchidectomy. No evidence of secondary tumours, but three cycles of chemotherapy (each cycle 2-3 days of treatment with a week in between at home) to prevent recurrence.
Background: Computer analyst; married, 1 child.

He had a dull ache in his testicle for a while, and when it did not pass he went to see his GP. The GP thought there could be a blockage and prescribed antibiotics. The ache did not go away and he returned to see another GP. He was examined and sent to have an ultrasound scan, which showed some lumps within his testicle. He had blood tests and a few days later his GP confirmed that he had testicular cancer. He had private medical insurance and received the rest of his treatment privately. He had surgery to remove one testicle and the epididymis (an orchidectomy) and also had a prosthetic testicle inserted during the operation. The surgery caused him bruising and he ached for a while after. The type of testicular cancer was confirmed as a teratoma which was 2.5cm in diameter. He recalls feeling ‘numb’ and that the process moved very quickly from visiting his GP to having surgery and seeing an oncologist. He was willing to talk about his diagnosis with people, but he did find repeating it to numerous people difficult. He felt it was important to talk about it to raise awareness of testicular cancer.
The oncologist took a series of blood tests and he had an MRI scan. He was told that if he did not have chemotherapy he would have a 60% chance of survival, but with chemotherapy the survival rate was over 95% at five years. He decided to have chemotherapy, having over 100 hours of treatment in total. During his treatment he looked up some information online but found much of it clinical and negative in tone. He would have liked to have read more about the experiences of other patients. He did attend a support group a couple of times, but found it hard being with other people who were unwell. His family and friends were a great source of support for him. His daughter was ten when he was diagnosed with cancer. He and his wife explained to her that he had a lump that needed to be removed, and found explaining things one stage at a time beneficial. He feels that it was important to be open with her as it would be better for her to learn the information from them than for her to hear snippets from other people.
Before starting chemotherapy he had long hair, and found it distressing when it started to fall out, so he shaved the rest of his hair off. Up until the treatment started he had not felt ‘unwell’ but starting chemotherapy made him feel ‘ill.’ He found he had to force himself to keep going back for treatment. He experienced nausea, bloating and extreme tiredness during the chemotherapy, but found anti-sickness medication effective. He also had a metallic taste in his mouth that got worse as he ate, and he found he could not tolerate any acidic flavours. He experienced pins and needles in his fingers and toes, and had problems with his short term memory so took a notebook around with him to write things down. His memory has now returned to normal, but he found it took a year before his energy levels returned to their original level. Throughout treatment he was able to complete some of his work from home when he felt able to do so.
He had regular check-up appointments following completion of the chemotherapy (every two weeks; monthly; every two months; every six months; annually). It is now six years since he finished treatment and he is no longer required to attend check-ups. His oncologist told him that after five years without a recurrence of cancer his chances of having cancer again in the future was the same as for the rest of the population. He sometimes still thinks about having had cancer, and wonders why he got it. He questions whether it could be related to pesticides as he grew up in a farming environment, or to the fact that he had had a vasectomy. His surgery and treatment has not affected his ability to have sex.
He was very pleased with the care he received privately, and feels sad that the same speed of treatment is not available within the NHS. He found he wanted to know all information, both good and bad during his treatment, so that he could make informed decisions. He found taking one step at a time helpful, rather than thinking too far into the future. He reminds people that many cancers can be treated, so urges people to go and see their GP and not to ignore symptoms.

He had a prosthetic testicle inserted at the same time as having a cancerous testicle removed...

He had a prosthetic testicle inserted at the same time as having a cancerous testicle removed...

View topic summary
SHOW TEXT VERSION
EMBED CODE
PRINT TRANSCRIPT
I was given the option of whether I wanted a prosthetic implant, basically a plastic ball.
What did you decide about that?
I had one in the end, I wasn't sure. I think there are a number of things that went through my mind. One I suppose is pure vanity, and I was lucky that I was in a long-term relationship, I'd already had a vasectomy, so children wasn't really an issue, so I was also very fortunate there. And I'm not quite sure why I did, and I'm not quite sure that my choice would be the same again.
Were there any pros and cons given to you?
There were quite a few. Basically the con side is you're introducing a foreign body into my own body, so there was much higher chances of infection and post-operative problems, slightly more complicated. There had been cases earlier on of problems with artificial testicles and, sort of, in the cold they shattered, and this sort of thing. But I was promised that the new ones did not have that kind of problem and I was actually given one to see and feel and whatever.
What was it made of?
I'm not sure exactly, it's a fairly hard plastic. Whether it's true plastic or silicone or whatever, it feels like a fairly hard plastic, slightly harder than a normal testicle, which is one of the reasons why I say I'd think about it twice, because I actually had problems with almost bruising because it hung slightly differently than the natural testicle, they were actually, almost bruising effect until everything got used to the new arrangement. So there were times when I wished I hadn't had it.
Did they put it in at the same time as they removed the…?
It was all done exactly the same time. They said, it's actually quite a straight forward procedure to put in; you know, they've already made all the incisions and so forth, and he said there was really no point in having a second set of surgery to implant. So he would recommend either having it at the same time or not at all. I don't know whether that's the standard recommendation but that was definitely his quite definite recommendation. He also said that it's quite straight forward to remove them again afterwards, it can be an almost out-patient exercise to remove an artificial testicle. And I haven't had that, I kept my artificial testicle.
What about sense of masculinity, do you think it affects guys' sense of masculinity at all or temporarily?
I think it does to a degree. Initially, especially early on. As I said, I had a prosthesis and I think that had something to do with why I decided I would have it. Part of it I think was automatic, I'm losing a testicle, I want one back. And as I said early on, with the surgery it was so rushed between diagnosis and surgery that I'm not sure I was making a 100% rational decisions all the time. So thinking back I'm really not sure why I decided to have the prosthesis. I think part of it is vanity, part of it is the self-image, part of it is sort of masculinity and sexuality.
Previous Page
Next Page