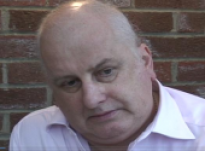 He had three urinary tract infections in late 1996 that the urologist suspected was caused by his left kidney, which was small and found to be barely functional. During surgery to remove the kidney the surgeon found it surrounded by tumour, which he biopsied. This and other tests proved the tumour to be a non-Hodgkin's lymphoma. He was started on a chemotherapy regimen called CHOP, which forced the tumour into remission.
Three years later he experienced pain in his right arm. After a course of physiotherapy that had no effect, he was referred for tests that revealed a recurrence of the lymphoma at the top of his spine. An operation was performed to remove one of his vertebrae that was surrounded by tumour. Unfortunately he acquired a type of MRSA infection in the spine as a result of the surgery and received treatment for the infection at the same time as chemotherapy for the lymphoma. High dose chemotherapy was followed by a transplant of his own stem cells which had been harvested earlier. Altogether he spent four and a half weeks in hospital in a special isolation room under strict conditions of hygiene.
After a remission of four and a half years he discovered a swollen lymph gland in his neck. A biopsy of another lymph gland in his back proved that the lymphoma had recurred again. He was put on a course of eight cycles of a chemotherapy regimen called PMitCEBO accompanied by a monoclonal antibody called Mabthera (or rituximab). At the time of interview he had just completed treatment and was awaiting results of tests to find out whether the tumour was in remission.

A scan showed that the pain in his shoulder was due to a recurrence of lymphoma that was wrapped...

A scan showed that the pain in his shoulder was due to a recurrence of lymphoma that was wrapped...

However in 2000 I started to suffer pain in my right arm and started to lose use of it, not entirely, but it was becoming difficult to use it, and it was getting steadily worse. Initially it was assumed to be some kind of trapped nerve in my neck. I was referred for physiotherapy treatment, of which I had about five sessions, and at that the physio referred me back to the GP with the suggestion I should see a surgeon, which I duly did.

Again, there were in this case an MRI scan, and he confirmed two or three days later that in fact lymphoma had returned, and in this case at the top of my spine. He recommended a laminectomy to remove one of the vertebrae, having had some discussion with the consultant haematologist who’d treated me in 97, the intention was to remove one of the vertebrae but also to take a biopsy, because until the consultant haematologist was clear exactly what form of lymphoma I had, he wouldn’t be able to recommend appropriate treatment.
So again, I went through surgery and spent a week or so in hospital, coming back out and recovering from the laminectomy. The whole issue became very complicated because I acquired an infection in the spine/back as a result of the surgery. And as you can understand, the surgeon wanted to cure the infection, the haematologist was keen to try and deal with the lymphoma, so I think there was some kind of dispute between the two at one stage. However, the decision was taken to start with chemotherapy and at the same time start treatment with some specialist infection treatment, which I understand latterly was a form of MRSA, and it did take probably the best part of six months to get rid of the infection that was eating down my spine.
Yes, so was it that the lymphoma had actually got into the bone, or was it affecting the lymph system around your vertebrae? Because I don’t really understand why they took a vertebra out?
I can’t say it was ever adequately explained to me. I understood the tumours were around the vertebrae.
Around it, yes that would make more sense to me.
I mean certainly the consultant haematologist wanted a biopsy taken, whether that formed part of it I don’t know.
Mm, so they actually took out a whole vertebra in your spine.
One, yes.
That sounds like pretty serious surgery?
Yes, because nowadays you don’t spend so long in hospital recovering, do you? But I was in for a week, but it took a lot longer just to heal, and the infection complicated life seriously, yeah.
This was the MRSA that you had?
Apparently so.

After an operation on his neck he had chemotherapy and a stem cell transplant using his own stem...

After an operation on his neck he had chemotherapy and a stem cell transplant using his own stem...

But the point of discussion of course is lymphoma, and I went through a form of chemotherapy during the mid part of 2000 and then they took me in for higher dose treatment. Having harvested the stem cells from my body they took me into hospital once again and I spent some four and a half weeks in a special designed room where they could use filtration equipment, and a room with my own facilities and so on, so that I could be protected from infection, as the white blood cell count was taken down to zero before the stem cells are put back into the human body. And certainly because the white blood count being so low, then I did get one or two infections along the way, which did stall my exit from hospital. Having said that, it was successful, and for the next four and a half years I was free of the disease.