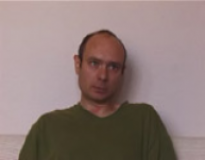 Age at interview: 35
Age at diagnosis: 13
Brief Outline: Diagnosed with epilepsy in 1980 at age of 13 but had symptoms since around the age of 6. Current medication' phenytoin (Epanutin) and levetiracetam (Keppra).
Background: Voluntary work in health services, previously IT consultant; single, no children.

Discusses recovering after a seizure.

Discusses recovering after a seizure.

View topic summary
SHOW TEXT VERSION
PRINT TRANSCRIPT
Obviously the cycle you go through when you're having a seizure is, everyone talks about the aura or the initial trigger and that may not happen but ultimately when you're coming out of a seizure it's the disorientation process you're going through, there's parts of your brain which are not working. You haven't totally shut down because during a seizure I've cooked meals and eaten, so that's fascinating. However, the psychological problem when you're coming round is the fact that you weren't in control, so its like having a squirrel in your head that's doing something different. But when you're coming out of it there's definitely the depressive stage your going through which is natural, it's the chemicals in your body which have to control you in some ways, that is what needs to be explained by a neurologist to people, and that is what's not given time for.

Explains how art, creative writing and meditation have helped him.

Explains how art, creative writing and meditation have helped him.

View topic summary
SHOW TEXT VERSION
PRINT TRANSCRIPT
Art is probably the one I'm most interested in but that's one thing which is a form of self therapy in many ways. And my interest in that leads on to creative writing because expressing yourself when you're writing is a wonderful medium and its what you need if you want to get involved in sharing ideas with people and expressing them to different audiences.

Have you ever been interested at all in complementary approaches to epilepsy?

Oh when I was going through I suppose a control period I was trying to deal with my psycho/social problems, I was trying all sorts of different medications and I was, I used to do meditation at the time, I'm a big meditative person, I'm a strong believer in many of those things. Now I don't have time to practice it but if I was in a house with space I'd probably meditate again. I was doing yoga but as the seizures got worse it's a bit embarrassing wandering out of the room half naked, so I stopped that. But I have an interest in those things just as I have a strong belief in there's body energies, you've got your seven chakras and that's how you can become aware of different chemicals rushing round your body. Or if you give time to actually think how you actually feel, hence the hesitation, I'm becoming aware in my body. So yes always an underlying interest in that.

Explains why he wants to come off medications.

Explains why he wants to come off medications.

View topic summary
HIDE TEXT
PRINT TRANSCRIPT
My interest now is to get off as much of the medication as possible because I'd rather be having seizures but know who I am and be myself. There are some people who are quite happy having lobotomies but that means there's no way back, they can't change that.  If my seizures were controlled for a period of time there's nothing saying they can't be controlled again, it's just a case of finding out - is there a social/psychological balance in my life required or was that the medicine working.

At the moment again reducing it [phenytoin] hasn't changed the frequency of my seizures, so I intend to continue doing that.  So ultimately I can just be on one medication and take as little of that as possible and once I'm in that situation I can then maybe try another one. But what's the point of being on medication if it's having no change or effect on you. Or more important the side effects are actually impairing your various abilities, so I would like to overcome that.

Yeah, have you felt that you've had a lot of a say in your treatments in deciding how, what you want to do, you know how have you felt about that side of things?

At first no - obviously - that's when I changed doctor, so the neurologist I go to now is more understanding but obviously with my interest in the subject, I arrived and she asked me what I want to do next. I'm judging her, she doesn't have time to read my notes and she doesn't have time to notice about the psycho/social problems that people have to deal with. She's a neurologist and she focuses, she specialises in a different area. What I've learnt from that is that when I was young, I would look up in awe at these doctors but all they're doing is trying different medication and shoving it in the cauldron and seeing what works.

So I have now got an interest in wanting to make people far more aware of those things, that medication isn't a solution to everything, it certainly may help in some ways but you are taking that medicine and you will have a strong involvement in that decision. Which in many instances means you have to understand a wee bit more about the condition and being able to do that psychologically actually improves your self-confidence. That again is something which is not given out in medicine at the moment, but that's personally why I would like to get involved in this field.

Realises that accepting he has epilepsy is an important step to dealing and living with it.

Realises that accepting he has epilepsy is an important step to dealing and living with it.

View topic summary
SHOW TEXT VERSION
PRINT TRANSCRIPT
Basically they [seizures] started coming back and this time they were complex partial seizures, so it's during the day I'd wander off and behave in unusual ways. At first I was living in denial,  you don't know you're having a seizure unless someone has told you, and the point there is whilst you can feel unusual chemical reactions going on through your body when you're coming out of a seizure, or you've lost your memory or whatever. You slowly have to start realising if you've lost your possessions or you've locked yourself out of the house or if you do have a seizure and you've bitten your tongue, you can't live in denial forever. Which ultimately goes along to the fifth phase of having to start accepting it which is what I'm going through now. Whilst I accept it, I'm more aware of things I do. I don't let it stop my life. I have lots of seizures and loads of auras if you want to call it that, but they're actually simple partial seizures.

And more recently as the epilepsy has come back that's when I realised that phase three, that period where it was supposedly controlled, I wasn't actually accepting that I was still prone to seizures and the side effects of the medication.  Now I have become aware of that, hence the interest in the subject and my sitting here at the moment talking about it, it's part of the process of accepting it but recognising there are strengths in having the condition as well as not necessarily being able to do other things.