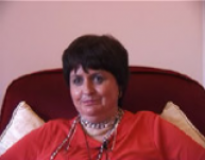 Age at interview: 53
Age at diagnosis: 2
Brief Outline: Diagnosed with epilepsy in 1951. Has tried several different drugs, and been involved in various clinical trials. Had neurosurgery at the age of 20. Although respondent had 14 years without seizures, seizures returned and epilepsy is not controlled. Current medication' levetiracetam (Keppra), phenytoin (Epanutin) and clobazam (Frisium).
Background: Self employed stress consultant; married, 2 adult children.

Thinks she might have developed a tolerance to anti-epileptic drugs.

Thinks she might have developed a tolerance to anti-epileptic drugs.

View topic summary
SHOW TEXT VERSION
PRINT TRANSCRIPT
Now this, this has gone on and as I said there are so many, at the moment there's a new drug, I've gone on to it and I think what's happening, I think, I do not know I've got no evidence - if that's the word - is that it goes for, I try a drug and it works and then slowly I become immune to it and therefore I have to stop and try another drug.

And what medications are you on now for the epilepsy?

I am on this latest one - Keppra, and also Epanutin and right down to 5 milligrams of clobazam I was as much as 10.

Explains why she decided against having VNS.

Explains why she decided against having VNS.

View topic summary
SHOW TEXT VERSION
PRINT TRANSCRIPT
Now you mentioned the second surgery. Are you thinking about that or what, you know, what have the consultants talked to you about?

Well it was, where are we March 2001, so we're talking about eighteen months ago, I went to see him and I, it was a check, it was a case of having another lobotomy operation, major, or the VNS. Now I've read up a lot more about the VNS and various people had sent the details through and I'm sure its gonna be good, better in time but its not too good at the moment.

As I pointed out, I don't know if you know about, you have to have a magnet on you and so on. And I was sending them back light-hearted comments like 'If you went on the tube, on the Underground, you have to be so much ahead of everybody because it wipes all the credit cards, mobile phones, the lot out.'! (laughs).

So you're not going to consider that?

No, well as I say it's the two choices. There's that one or the more major one and I know it sounds silly, the major one is more successful, that was what I was more in line for, when we spoke, he and I could suss each other out and he realised it was gonna be better, and I virtually said you know - yes, the VNS isn't good enough at the moment for myself. It has been okay and passable for some.

Explains that she lives close to a train station because she cannot drive.

Explains that she lives close to a train station because she cannot drive.

View topic summary
SHOW TEXT VERSION
PRINT TRANSCRIPT
I just got used to it [not driving]. The only one time it had any concern was when I had a job and again it was just common sense, this is the only thing that has restricted, this is why we live where we are because of not being able to drive. Now not being able to drive has worried I am sure a lot of people because also its a lot more well known that women drive and so on.  Having not driven I don't miss it, if people have driven and then they lose their, it must be awful for them, I feel very sorry for them.

But no, when we went to look for somewhere to live we got, that was the main thing, we had a circle round a station, well you know yourself, and being a mover still, it wasn't going to stop me moving you know because I've got epilepsy.