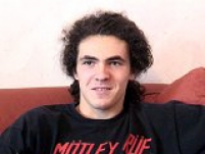 Age at interview: 17
Age at diagnosis: 6
Brief Outline: Robert was diagnosed with epilepsy at 6. His seizures were uncontrolled until he had neurosurgery 10 months before the interview and he has been seizure-free since.
Background: Robert is 17 and a student at college. He is single and lives at home with his mum. Ethnic background / nationality' White British.

Robert is 17 and a full-time student at college. When he is was 6 he was diagnosed with epilepsy. Robert remembers having what he used to call "funny turns" when he was little, as early as Year 1 in school. He says he didn't know anything about epilepsy at the time and didn't realise that these were in fact seizures. Robert went to a special needs school and he found the work too easy. He is now at college which he says he enjoys much more.

When Robert was 16, 10 months before the interview, he had neurosurgery to treat his uncontrolled seizures. Robert says he was nervous about the operation but decided that he definitely wanted to go through with the it because he wanted to free from the seizures. Straight after the surgery Robert found it difficult to remember things like his friends' phone numbers and also walking was difficult at first. Robert recovered well and when he went back to college he noticed major changes for the better.

The brain surgery has changed Robert's life in many ways. Robert says he used to be really hyperactive and his moods would be up and down. He also used to find it difficult to work things out in maths, for example. Robert describes himself after surgery' “I was more calm and I could think lot more, work out things,” and he didn't need his teaching assistant anymore either. Also his hearing has improved and he says he's much more able now to hear the lyrics in music and the chords the music is played in. He is now training to play his guitar by ear, rather than by reading the tabs. Robert has been seizure-free since the operation and says he is really happy that he had it. Robert still takes his epilepsy medication as it is a long process to wean off.

Robert lives at home with his mum. He is into heavy metal music and says he'll be able to go to gigs and festivals more often now. He also likes hanging out with his mates. Robert would like to be a plumber and plans to take a plumbing course after college.

Robert describes how he felt just before the operation and the pain he had straight after.

Robert describes how he felt just before the operation and the pain he had straight after.

View topic summary
SHOW TEXT VERSION
EMBED CODE
PRINT TRANSCRIPT
But the day when the actual op was coming I was pretty nervous for that. And I was like Oh God I just like didn't know what to think. I was like thinking shall I turn back round [laugh] not go for it or shall I go for it. I think to myself I am gonna be free from these fits if I have this op. I just carried on walking forward, went in there, in goes the needle and then just like I was put to sleep. Later on I was just like woke up with needles in my foot, one in both hand and some massive plastic bottle on the side of my head and I couldn't turn my head that way, so I had to either lie that way or that way. And I just like wanted it out and they said, 'I am afraid you are gonna have to wait till tomorrow.' I was like, 'Well if I need to go to the toilet you are going to have to go there.' I couldn't sleep through the night because there was some kid opposite crying a lot. And I was just like 'oh I can't cope in this room. I want to get out of here'

Morning comes. They take every needle out my foot. Now the plastic ones weren't painful, but the one in my head I had to lean aside and, 'We will take this out. It won't hurt.' Bang it comes out and they stitch it up really quickly and it was actually quite painful, it was. Then I just like fainted. Woke up a couple of hours later, all fine just feeling all dizzy I did and that was it. Just like I couldn't think straight. It was quite hard.

Robert says he couldn't 'cope with being at school' and the special needs classes were too easy for him.

Robert says he couldn't 'cope with being at school' and the special needs classes were too easy for him.

View topic summary
SHOW TEXT VERSION
EMBED CODE
PRINT TRANSCRIPT
College, it's okay. I prefer it a lot more then I did at school. School I went to was special needs, the work was too easy for me in a way. I just thought this work is too crap. I just can't stand it. I just wanted to leave this school but, 'You can't 'cos your behaviour and all that'. I was like, 'Yes, I just wanna go, because I have had enough doing it, having work that is like nurseries.' I just couldn't cope, being at school.

After the surgery, Robert can pick up the sounds when he's playing music much better than before...

After the surgery, Robert can pick up the sounds when he's playing music much better than before...

View topic summary
SHOW TEXT VERSION
EMBED CODE
PRINT TRANSCRIPT
I am into all the heavy metal music and like every time I'd listen to a song or something, I couldn't really hear the lyrics that well. The words that they would sing out I can't really hear them that well or couldn't. And also like I play guitar, I am trying to train my ear to like pick the sounds instead of like reading tabs and all that, just like listen to it, and really pick the sound up. The drugs may, did muck my hearing up a little bit they do. They were like made things sound totally different. Nowadays when I listen to songs on my MP3 player or on the radio I can hear the lyrics more and I can hear what chord is being played more. And what fret it's being played. I am also not as nervous as I used to be 'cos I was like really, really, nervous and' too worried, a lot. I would like get worried, really nervous.