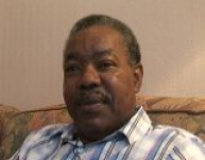 Age at interview: 67
Age at diagnosis: 42
Brief Outline: Diagnosed 25 years ago, James takes metformin, doxazosin, lisinipril, gliclazide and sotacor.
Background: James is a partially retired university porter who is married with two young sons and also a grown up son and daughter from his previous marriage. Ethnic background/Nationality: Born in the West Indies, living in UK.

James feels he is managing his diabetes very well. He has a good relationship with his GP and has felt able to go to him about any concerns. James was diagnosed about 20 years ago, since when he has been given several combinations of medication. Now he feels his diabetes is '100% well managed' and that he is on a regime that suits him well. He tests his blood glucose levels every morning and makes a note of the readings in a book which he shows to his GP every 3 months.

James leads an active life. He has two young children and has recently returned to almost full-time work even though he should by rights have retired. He has two allotments and spends as much time as he can gardening. He grows many different vegetables which he cooks for his family and feels that gardening has helped him get fit and given him the incentive he needed to exercise regularly.

He compares his pro-active approach to diabetes with that of many of his friends in the UK and the West Indies, who try to ignore their diabetes until it reaches crisis point. James says that he did find it difficult at first to drink less alcohol, especially beer, but now drinks wine instead. He is also very careful to avoid eating processed foods and or foods that contain a lot of sugar.

James grows vegetables on two allotments and says that all the digging as well as the cycling...

James grows vegetables on two allotments and says that all the digging as well as the cycling...

View topic summary
SHOW TEXT VERSION
PRINT TRANSCRIPT
Well again, the allotment I do quite a lot of quite a little bit, by digging and that help me, a little bit of exercise. Yet again, my GP advised me to take a walk or cycle, and I do that as well. But I enjoyed doing physical work at the allotment digging, and I can feel even better when I go to the allotment and do digging with the fork. The crop that I get from the allotment is working out very well for me because I am just planting that I know that I wants to eat.

So what do you grow?

Oh everything. Potato. Sweetcorn. Cabbage. Lettuce. A lot of tomatoes. Lots of beans. Spinach. Beetroot. Peas - garden peas. And I grow some, too much of these things and I give things away to people at times. When I have a lot of sweetcorn there - sweetcorn. I enjoy eating sweetcorn.

The exercise which my GP advised me to take up, some exercise, go for a walk, if it is even twenty minutes either way and if I can cycle. But I do a little bit of cycling - not too far. But the joy of it is my allotment which I do physical work there, and I sleep very well after doing the allotment. I never feel too tired and I sometimes, sometimes if I am up the allotment again and I haven't eaten anything then I feel I get too hot and sweaty and I know I have to finish and then get something to eat. Not very often this happens. because my wife always insists I take some food if I am going there or a drink or something.

Okay so when you are at the allotment how long would you spend up there?

James says he feels proud of the care he receives from his GP.

James says he feels proud of the care he receives from his GP.

View topic summary
SHOW TEXT VERSION
PRINT TRANSCRIPT
Nowadays you go to the Caribbean and there's a lot of people down there with diabetes and they have got to pay for all their medication. And the doctor never seems to' Just give them the medication, and [they] never test it you know to know whether it is the right medication for them, whether they should increase the does or reduce it or change it to something else. I have seen it done there, with people I discuss this sort of thing, they don't do anything, just give them tablets and think that is it, that will calm it down - it doesn't.

So you feel yours is quite well managed?

I didn't know anything about diabetes. I never met anyone with diabetes except, yes, I have, except my own people said that they diabetic and they inject themselves, so I wondered what it was like until my GP told me. This is something that can give you strokes, is it high blood pressure or sugar level? But sometimes with my diabetes if I stay too long from eating anything I became hot and sweaty, feel weird and [laugh] at one time my GP, I was in his surgery and he took my sugar level, and I showed him the reading I had which was 2 point something. And he just got up like this and just run downstairs and got some biscuit.