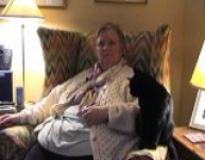 Age at interview: 60
Age at diagnosis: 57
Brief Outline: Diagnosed when she was 57. Isabel was taking metformin and pioglitazone at the time of interview.
Background: Isabel is a retired solicitor who is married with children and grandchildren. Ethnic background/Nationality: White Canadian.

Isabel blames many aspects of her former lifestyle for her diabetes.

Show in context
SHOW TEXT VERSION
PRINT TRANSCRIPT
Now do you have any idea what might cause diabetes generally?

Well it's the failure of the sugar to be absorbed by your insulin. You, the body to produce enough insulin to absorb the sugar and convert it into whatever it is that's supposed to then excrete it. And I know that there's a lot of research on talking about insulin-resistant cells in your body, and there's quite a breakthrough, that recently has been made about that. So if it comes up in the newspapers I am always interested in it, you know I want to read more about it.

Do you think there's anything that might pre-dispose you? Any factors?

Fair, White and 40, or in this case 60, you know I think I must be a classic case for having, for getting diabetes' I'm indolent, I don't exercise as much as other people, I'm very overweight and I eat too much. And I think that pre-disposed me towards diabetes, too much sugar in my diet, too much fat.

Isabel thinks it would have helped her in the early days to have gone to a support group to...

Show in context
SHOW TEXT VERSION
PRINT TRANSCRIPT
Very limited, very limited. I went on to the website, well I, for the British Diabetics Association but Diabetes Association [Diabetes UK], but it wasn't very, it was sort of child's stuff, and I didn't find it very satisfying. I've read a few books about diabetes, you know, not very satisfying either. So a lot of it has been my own explore, you know, exploration and finding out what happens to me.

Would you have appreciated more information?

Is there anything in particular? Any areas in particular you felt it would have been useful to have information on?

I think first of all I think that some form of a support group, so that people who are newly diabetic could meet together and talk about what's happening. I have a neighbour across the way who's mother's just become diabetic, and she, her blood sugars are going up and down quite a lot and she's not sure why, and it's very frightening.

You can't really, it's difficult to go to a clinic and say 'I'm frightened because of this,' you can say that they're going up and down, but it's not really the thing to talk about your emotions, so you can't say 'I'm frightened.' And that's what it would be if you were doing all level where you're in a room with people who are similarly effected by just, by having conversation, that can be more re-assuring than anything else.


It took a long time for Isabel to adjust to having diabetes but now she is healthier she also...

Show in context
SHOW TEXT VERSION
PRINT TRANSCRIPT
And so it's taken a long time for me to adjust, I haven't really acknowledged it in a way. I've taken my pills all the time, but I've not changed my diet, my way of life at all until about four months ago. And I've begun to lose weight and my blood sugar has slowly come down my HbA1C, was 12.5% and its now down to 6. But it was 6, it had only just got to 6.8 earlier this year. So it's taken a long time.

You, it's a sign of ageing and you don't like to acknowledge that, you think you can manage everything and I'm the sort of person that managed a very busy complex life doing lots and lots of different activities, etcetera, and so forth, and this was a sign that I wasn't invincible. And so it was a psychological impact on me, and therefore I resisted it as long as I could.

I'm happier, I'm prepared to talk about it more. And I also am working towards a better lifestyle, a healthier lifestyle for me, which has meant that I've lost weight, which is very positive, and therefore I've gained confidence that I can have a reasonable lifestyle and yet, and keep my diabetes under control. So gaining confidence in it. And I'm not just relying on the medication to achieve that.