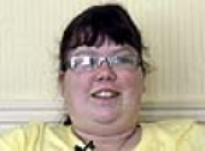 Age at interview: 18
Brief Outline: Sian is 18 and living independently in supported housing. At a young age, she developed an eating disorder and has also experienced depression and self-harming. Sian was put in care where she lived for a few years. During a stay in a psychiatric unit Sian met two girls who've become very close friends since. Sian says getting better is a long process where you have to want to be helped. (White British).
Background: See 'Brief outline'

Sian is 18 and working fulltime. She started hearing voices at the age of 10 and was also badly bullied in school. From the age of 8, Sian started developing an eating disorder and was later diagnosed with both anorexia and bulimia. She says she was never a big child but was still bullied for her size in school. She started skipping meals to try and control her life through not eating. Sian stayed in a few different hospitals but things were just getting worse for her. Sian was also self-harming and says she was “trying everything to hurt myself”. To stop her self-harming in the psychiatric unit, she was physically restrained. She says it was an awful experience and she felt like the people trying to help her were in fact just controlling her.
Sian was placed in care and first lived in a secure unit and then moved to a children’s home. Now she’s living independently, with support whenever she needs it. Sian says she’s had really positive experiences of being care and it helped her a lot. She says it was “one big family” and gave her a lot of positive experiences and opportunities she otherwise wouldn’t have had.
When in the local psychiatric unit, Sian met Mandy (see Interview 11) and Frankie (see Interview 13). The girls developed a very close bond during the months they stayed in the same unit and have stayed friends ever since. They stay in touch regularly and refer to each other as “sisters”. They all say that getting to know each other was the biggest help they got, both in and out of hospital. During their stay in the hospital, the girls got to know each other’s moods, knew when to support each other and when to leave each other have the space to have their own time. They say they “kept each other sane in the most insane ways”.

Sian says that to get better, you’ve got to accept things and “have to want to be helped” and will only then things will get a whole lot easier. She says it can be really frustrating because you can’t just “snap your fingers and be all over with”. It’s “a long working process.”

For more from Sian see her Group Interview 11-13.

Sian started losing weight because she was bullied about her weight in school.

Sian started losing weight because she was bullied about her weight in school.

View topic summary
SHOW TEXT VERSION
PRINT TRANSCRIPT
Yeah it started roughly when I was about, say about 8, 9, I was in primary school and I was just generally getting teased. I wasn’t a big child but I wasn’t like quite slender and I was like, wasn’t skinny but I wasn’t fat either, I was just like in between, the average weight. And I just got bullied for it, and that’s it really. I used to like skip meals and see if I could just, and every day I went without eating it was like a bonus for me, it was like, it was like a pat on the back to myself, like, “Well done, keep it up. Keep going.” So that I just used to keep going, keep going and see how long I could last. That was it.

Sian stayed 12 months in eating disorder units and then moved to a childrens home.

Sian stayed 12 months in eating disorder units and then moved to a childrens home.

View topic summary
SHOW TEXT VERSION
PRINT TRANSCRIPT
And just sort of went on like that for two years bullying in primary school, and I was referred to, when my Mum had found out about my diary and I was also referred to CAMHS. I was under two horrible women, called Anorexic Nurses and they, they basically weighed me every time I went, which was once a week. So I used to like hide things in my socks and things, just little pennies and things that I thought would add weight on. Which didn’t, my weight continued to fall.
I was put into a unit in [town name] and then I stayed there for eight months while they got my weight on target and things. came out after eight months and I just went rapidly downhill again. I was diagnosed with depression and things and when I was in [hospital name], when I was in the unit in [town name] and then, ‘cos thing just got worse after I came home, I was put in another unit, called [hospital name] in [place name], and I wasn’t too good so I just used to like people to, tend to like kicked off, ‘cos like [laughs] I used to like just get really angry with people and things, so then after that they put me, they referred me to a social worker, ‘cos my Mum was at like, my Mum really just couldn’t cope, so my Mum then turned me over to social services, so I was then put in care, sent to a secure unit, and for welfare. So I was put in a secure unit for 3 months, then I went to a children’s home and basically it was a therapeutic unit and we used to do stuff together and things, great time really, and then I’ve just gone down the support side of things really. I’m on my own now currently, living on my own, with support. And that’s it basically.

Sian says that being in care was 'like a big family' and helped her a lot.

Sian says that being in care was 'like a big family' and helped her a lot.

View topic summary
HIDE TEXT
PRINT TRANSCRIPT
Well being in care was just like, it’s like a big family really, it’s just like, care did, care did give me so much, ‘cos it, it helped me loads and loads, I mean just like little bits, of like things that I hadn’t experienced and wouldn’t necessarily experience if I had lived at home all my life, I experienced due to being in care, and a lot, a lot of opportunities and things out of it. It was quite a good experience, but like everyone thinks that people in care are like quite naughty and have loads of issues and, generally reject us when you’re in care but, it’s not, it’s not always like that. Yeah.
Previous Page
Next Page