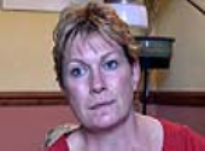 Age at interview: 46
Brief Outline: Jenny is in a trial of different ways of treating heavy periods at her GP surgery. The trial compares standard treatment with a new kind of coil or intrauterine device which releases a hormone in the womb.
Background: Jenny is a student nurse, divorced, with 1 adult son. Ethnic background/nationality' White British.

Jenny’s life was severely affected by heavy bleeding and pain during her periods. She went to her GP to ask for treatment, and he asked if she would like to be part of the ECLIPSE trial. This is comparing standard treatments (tablets, or the contraceptive pill or injection) with a newer treatment, a coil or intrauterine device which slowly releases a hormone into the womb. The trial is looking at both the effect on bleeding and on the woman’s quality of life (assessed by a regular questionnaire).
Jenny was desperate to have any treatment, and was happy to take part in the trial in the hope that it would solve the problem. She is a nurse by background and has worked as a representative for a pharmaceutical company, so she knew a bit about medical research and clinical trials already. She had no particular preference for which treatment she would get. She was randomised to the group receiving standard treatments, and her GP prescribed mefenamic acid tablets.
At first she felt the tablets were making a difference, although looking back she wonders if that was just a placebo effect, as she was just so glad to have started treatment. But after some months she went back to her GP and told him the bleeding was still very bad. He changed her to the group having the special coil. Since then, Jenny’s symptoms have improved dramatically and her periods have almost stopped. She wishes now she had been allocated originally to the group given the coil, but she never thought about dropping out of the trial and feels the care at her surgery has been very good. She is unsure whether she will be told the results of the trial, but would like to know – though her own experience with the coil has been so good she would find it hard to believe it if the results showed standard treatment was better.
She would definitely consider taking part in another trial, but it would be in order to get treatment rather than to be altruistic. She would be less happy to take part in a trial where she might be given a placebo. Jenny has recently had surgery for a cerebral aneurysm (an abnormal bulge in an artery in her brain), and would be interested in any research into aneurysms. She also thinks understanding the causes of the fibroids which have led to her heavy bleeding is an important research topic.

Jenny was pleased to be invited by her GP to take part in a trial of different treatments for...

Jenny was pleased to be invited by her GP to take part in a trial of different treatments for...

View topic summary
SHOW TEXT VERSION
PRINT TRANSCRIPT
My GP asked me to be in a trial because I was having major bleeding, absolutely awful, it was about every two weeks. I was bleeding so heavily and I was going through so much, so much sanitary protection it was unbelievable, and he just suggested that I went in for the trial, because he wanted to put me on mefenamic - or no, he wanted to give me options as to what I was going to have, you know. Either it was, I think it was three items. It was either the coil, another drug, and mefenamic acid, and I obviously got selected for the mefenamic acid. But that’s why I went in for the trial, because I was just in such, such pain with the, with the periods.
I was given a leaflet with the ECLIPSE* logo on the front and all the data about why they were doing the trial and what products were included in the trial, and everything about the trial. You know, it was all sort of randomised, and it wouldn’t, nothing would be, nothing would be associated with me personally. It would all be sort of like patient A, B or C, you know. I wouldn’t be defined as in my name or anything like that. And - but to be honest I would have been quite happy to do anything, because I was that desperate. You know, I would have been quite happy to just put my name to anything.
* ECLIPSE = Effectiveness and Cost effectiveness of Levonorgestrel containing Intrauterine system in Primary care against Standard treatment for MEnorrhagia
FOOTNOTE' It is important to remember that you can have treatment anyway outside the trial and do not have to consent to a trial in order to be treated. Sometimes a new treatment will only be available as part of the trial, but in most cases there will be other treatments available.

Filling in the questionnaire about her symptoms prompted Jenny to realise that the treatment wasn...

Filling in the questionnaire about her symptoms prompted Jenny to realise that the treatment wasn...

View topic summary
SHOW TEXT VERSION
PRINT TRANSCRIPT
What kind of follow up was there to check whether it was working, what the outcome was?
I think, and again it’s only vague memory, but I think I got a letter six months after I started taking the tablets, and they asked me about all the things, you know - was it, was it affecting my work? Was it affecting my... hobbies? My sex life? Lots of things about the, how it was, how it was affecting me, and... again I think I got another letter about six months later. Probably, yeah, it was probably about a year after the whole thing started, I thought, “This is, you know, I’ve got - this can’t be what I’m going to be like for the rest of my life.” So I think then I went back to my GP and said, “Look, I want something else, please.”
So was it making no difference to you at all, as far as you could tell?
…I don’t think it was. I think at first it did, but I don’t think it did after that. Probably for the first - but again it could be psychological. I could be thinking, “Great, you know, I’ll be alright, I’ll be alright”, and then it probably, maybe it didn’t after the first couple of months. It probably, the whole thing was just… I don’t think it affected me at all.

Few people know about the amount of background work which goes into setting up a trial, but you...

Few people know about the amount of background work which goes into setting up a trial, but you...

View topic summary
SHOW TEXT VERSION
PRINT TRANSCRIPT
I don’t think they are aware of the, what goes into the trial, and how long it takes for it to, the product to be developed, and all the machinations of the, the lab work and everything like that. I mean it’s just, you know, they just think it’s – I know I’m being generalistic now - but they, I think, I don’t think they believe what, they understand what goes on, in actual fact.
Do you think there’s more that we should be doing to educate people about trials and clinical research?
I think there could be lots that you could be doing, but I don’t know whether anybody would actually be that interested [laughs]. But you know what I mean? I mean, I’m interested because of my background, and I’m very passionate about all this sort of thing, but a friend of mine – well, I mean, a lot of my friends wouldn’t even, you know, they would be more interested in horses or, you know, whatever they’re doing. I don’t think - I think it depends what makes your pump thump.

Jenny cant imagine any condition where shed be willing to think about a placebo-controlled...

Jenny cant imagine any condition where shed be willing to think about a placebo-controlled...

View topic summary
SHOW TEXT VERSION
PRINT TRANSCRIPT
If I was experiencing a particular condition, is there anything I wouldn’t want to get involved in? …No, there isn’t. If I’ve got the condition and I want it to be treated... mind you, I’d have to be absolutely convinced, like with an aneurysm, I’d have to be convinced that it was going to treat me. I wouldn’t want to just sort of sign up for it because, you know, it was going to pay me £20, or something stupid like that. I would want to - it’s the quality of the care that I would get that would be vital, and the background knowledge that I was going to be given that would be vital… especially for aneurysm.
So for instance a placebo-controlled trial, how would you feel about being offered that, where you might be randomised to getting a placebo or you might get the treatment?
I wouldn’t want to do that - if it was so vital that I had the treatment. For - I can’t even think in what context I would, it would be okay to have a placebo rather than the actual product, if it was going to work. Because if I, even if I’d scratched myself, I wouldn’t want to have a placebo dressing and then someone else gets, you know, an all -singing all-dancing dressing that heals them in two days, or something like that, so.
I suppose the problem with trials is by definition you don’t know if the intervention is actually going to be any better than the placebo. But there’s something that worries you about…
There is, yeah. Because, I think, of the fact that I’ve had this neurosurgery*, I’m thinking, you know, I wouldn’t want to be involved in anything that was potentially - I mean, okay, fine, if all the products are going to sort me out, or potentially going to sort me out - mind you, placebo might as well, mightn’t it, because it might just sort of, you know, the fact that you’re taking something or you’re sticking something somewhere might just be the thing that you need to get you through. I don’t know.
But for that to work you’ve got to believe it’s something that’s actually an intervention?
Yes, but as well I would - would I know the difference? I probably wouldn’t know the difference, if I wasn’t told it. I’d think, “Oh this, you know, I’ve got to take it tds” [three times a day] or whatever, and that’s it, and I’ll do it. You know, I’m very regular with what I do, you know. I’m very sort of emphatic about times and all this sort of thing, and if I thought it was going to work I’d blooming take it.
* FOOTNOTE' Jenny has recently had surgery for a cerebral aneurysm (an abnormal bulge in an artery in her brain).
Previous Page
Next Page