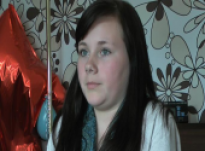 Age at interview: 15
Age at diagnosis: 7
Brief Outline: Kerenza is taking part in a research study following young people with arthritis. She has to complete questionnaires about how she feels and how she is coping with any pain.
Background: Kerenza is 15 years of age, White British, attends a local school and lives with her parents and sister. Kerenza enjoys dancing. She was diagnosed with chronic juvenile idiopathic arthritis at the age of seven.

Kerenza is 15 years of age, White British, attends a local school and lives with her parents and sister. She enjoys dancing in her spare time. Kerenza was diagnosed with chronic juvenile idiopathic arthritis at the age of seven and had regular injections of methotrexate. The methotrexate was making her feel poorly so she is now having etanercept injections on a weekly basis. She is able to do this herself at home.

Kerenza is taking part in a cohort study. A cohort study is a study of people who have a certain condition or receive a particular treatment and are followed over time. They may be compared with another group who are not affected by the condition. Kerenza has been part of the study for a while, although she can’t remember when she first started to complete the questionnaires. She recently signed an assent form to say she will continue to be part of the study. She wants to continue to take part to help herself and other people with arthritis.

The questionnaire is quite long, about 10 A4 double sided pages. However, many questions are of a tick box nature and therefore it doesn’t take too long to complete. She says it has helped her to better understand how other people with arthritis might be feeling. She says it is good to take part in the study because it is helping others. However, she says that if other young people are thinking of taking part in a study, if they are worried then not to do it or make sure to ask the researchers, nurses and doctors lots of questions before making a decision. She says it would be nice to know other young people with arthritis to share experiences and to feel less alone with the condition.

The questionnaire on arthritis is quite long and covers lots of topics, from pain to how you are...

The questionnaire on arthritis is quite long and covers lots of topics, from pain to how you are...

View topic summary
SHOW TEXT VERSION
PRINT TRANSCRIPT
They were like, you get an appointment to go and see her. And she just like asks you about like how you are and stuff and then she says like I’ll send you some questionnaires and you get a packet about that thick. Just full of questionnaires and they’re just, I think it’s just to try and figure out like how well people are coping with it and it’s obviously like your young and it’s just like how you’re coping with it and if they can help you in anyway.
Yes, yes that’s good. And what sort of, were there lots of questions, I mean what was it, was it a long questionnaire?
Yes, yes there’s quite a lot of questionnaires like there was some for me and some for my m and dad.But they, they generally like repeat the questions but in different like word it differently. So obviously see like on average like how you are actually coping and stuff.
Yes, and how many, about how many questions are there, is there lots?
Like there are lots.
How many pages like three, four?
About ten.
Ten pages.
Yes.
It is long then.
Yes.
And are they short or long answers or?
It’s just like tick a box type of thing and but there’s one set because they’re like little booklets, you know, like an A2 booklet folded in half. And it’s just like saying, you know, like there’s some that you have to actually write how you actually feel that you’re doing and like stuff.
So there’s some that you have to give explanations for?
Yes.
And some are just yes, no?
Yes. Some are just like tick the box, put like the mark on like your pain and stuff that over past month or something.
Ah okay. So how do they measure your pain?
Well it’s just like there’s like a little, a little line and it’s like zero no pain, a 100 like really painful and you just like mark on where like you think you are like the past month. And there’s like how well are you coping with it zero to 100.
Ah okay so they’ve got measures there and you just put a cross where you are at that time?
Yes.
Yes and I mean did you find it easy to complete?
Yes it gets me quite upset sometimes so it’s like you’ve got to think about how you’re coping and stuff and it does like get me quite upset because obviously like I know but they are easy to do as long as you don’t get upset.
And what sort of questions does it, is it because it makes you think about it?
Yes it’s just like saying because there’s one that makes you cry and it’s like why do you think that you have this and there’s like because you actually have to like write down what you’re thinking, it always makes me really upset because obviously like you don’t know. And like some days like you’ve had like a bad couple of months you just like why have I been given this type of thing.
So it makes you question yes why you have the condition.
Yes.
Yes and do you get a lot of pain with your?

Kerenza said that the questions have changed a little over the years. They used to be more about...

Kerenza said that the questions have changed a little over the years. They used to be more about...

View topic summary
SHOW TEXT VERSION
PRINT TRANSCRIPT
Because I know that like if, you know, like if they found out that it does help better then I’ll be helping myself and I’ll be helping other people for better treatments.
Yes, do you think that’s important?
Yes.
Yes so that would be a key motivation?
Yes.
And do you think that’s what was behind you wanting to take part this time?
Yes.
Yes helping others. And do you think you have gained?
Yes.
In what ways?
I don’t know I just feel good.
You feel good.
I felt like helping because I know that it, well it might help but it might not but I still want to try.
Yes that’s poignant thing isn’t it that you’re trying?
Yes.
So how have the questionnaires changed then over the years can you remember?
They’re just like as I’ve got older they’re more about like emotions towards it because obviously when you’re little you don’t particularly know anything but obviously when you grow older and you’ve been going for a long time then you kind of understand it a bit more so they just get more about your emotional side of it.
So what did they ask when you were younger then was it more?
I think it was more just like your pain and like do you understand that you have this which was like yes. And like do you know what treatment you’re on and do you know what that does but obviously like you don’t actually know but like I do now.
Was it, does it help filling in the questionnaires, has it helped you at all to understand?
I think it does give you a better understanding, not because like obviously it tells you stuff but especially like the multiple choice it gives you options to pick from so then you kind of understand what other people think so then you kind of understand it a bit more.

Kerenza says it would be nice to know other young people with the same condition and having...

Kerenza says it would be nice to know other young people with the same condition and having...

View topic summary
SHOW TEXT VERSION
PRINT TRANSCRIPT
Do you think that would be nice to meet other people?
Yes definitely. Because I‘ve never met anybody else who has arthritis and I kept, at my age obviously like you know, like old people that have it but I’ve never met anybody that’s going through the same thing that I have but I know that people are.
Right so yes, so you’d like to meet others who are perhaps having the same treatment?
Yes, yes and like what they feel about it type of thing and like, you know like people can help each other because they know, because like obviously like your mum and dad they’re always trying to help but obviously they don’t know what it’s like. So I think if like I knew somebody else that was finding things difficult and like I could help them and they could help me type of thing.

Kerenza enjoyed completing the questionnaires as part of a research study. She learnt more about...

Kerenza enjoyed completing the questionnaires as part of a research study. She learnt more about...

View topic summary
SHOW TEXT VERSION
PRINT TRANSCRIPT
Well I just think that it’s a good thing to do because it does make you understand more, you know, like what, why, why you may have it and stuff because obviously the options are like obviously there was one which is actually the proper reason why, so it does make you understand a bit more of it. You know other people have it and they think of like this type of thing. I just really enjoy filling in because I know that other people have to fill them in it's not just me. Because I know that they get sent off to like 100s of other people that have the same problem as I do.
Does that make you feel like you’re contributing?
Yes.
Yes, so that makes you feel a bit easier really, you’re not alone?
Yes.
I think that, I think it’s good because obviously they could help others which is helping themselves. So I think it is a good thing to do but obviously like people don’t have to do it obviously if they don’t want to then that’s fine but you know like people are like oh I guess I could it is a good thing to do type of thing.
Previous Page
Next Page