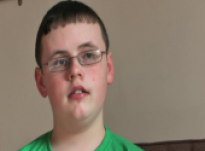 Age at interview: 13
Brief Outline: When Jhon was born his parents took part in a lung and asthma study that has involved annual questionnaires. Jhon recently took part in the second stage of this long term study at his school which was an allergy survey.
Background: Jhon, aged 13 is White British, lives with his parents and attends Secondary School. He enjoys 'making a difference', swimming, reading and being with friends. Jhon was diagnosed with Osteogenesis Imperfecta in the womb.

Jhon is 13 years of age. He currently attends Secondary School and enjoys ‘making a difference’, swimming, reading and being with friends. Jhon was diagnosed with Osteogenesis Imperfecta (causing bones to break easily) when in the womb and continues to have regular treatment and check-ups at his local hospital. He has had biopsy tests for himself, and also for research. He also acts as a “Dummy” for student doctors to try out their skills when he is having treatment for his Osteogenesis Imperfecta.

Jhon is supportive of research and enjoys taking part. Jhon says that it is important for young people to take part in research to help others. Having taken part in the second stage of a long term study (a cohort study) at school, Jhon said he would like more detailed information about studies to be given to young people. He particularly feels that the researcher’s need to be honest about any potential side effects and that the results of studies should be explained clearly and in a way that young people can understand.

In giving advice to other young people who may be thinking of taking part in a clinical trial or a research study, he says, “If you’ve got any questions write them down so you don’t forget. And then when you get there or before you get there contact them, or speak to your parents and say, “Could you answer these questions for me?” He continues “Just make sure you’ve asked your questions before you do it because it’s important that you know what you’re doing before you go ahead and do it”.

Jhon is keen to continue taking part in the research about asthma to help other people, even...

Jhon is keen to continue taking part in the research about asthma to help other people, even...

View topic summary
SHOW TEXT VERSION
PRINT TRANSCRIPT
And do you know why they were doing it? Did they explain in the information what the purpose was?
Yes. Sort of it, there was like a paragraph sort of just explaining that the tests were to develop the knowledge on asthma, sort of covering childhood, and that the research was going to be used for that and sort of only that, and that they’d been tracking us since we were born and they’d hope to continue it when we were adults as well, if we agreed to it.
So there was like an option for you to do, so there was going to be like a third stage?
Yes.
Did they say how old, what age?
They said that sort of our parents do it until we’re 18. It was our choice if we did the tests, but the surveys were sort of organised through our parents. And then when we’re 18 they’ll write to us instead and ask if we want to continue with it. And that’ll continue until old age.
Until old age - Just keep continuing? So your parents agreed to the first part, the filling in the surveys. I know I’ve spoken to your dad about that. Did you also have to sign a form to say you agreed to do the tests at school?
Yes. We had to assent on the initial form. And then when we got to the sort of actual tests we had to sign again, just saying that we’d spoken to the researchers about everything, that they’d answered all our questions. And then sort of they began the tests.
When you had to bring home the information, did your mum and dad also have to say if they - agreed for you to take part as well?
Yes. In the initial letter there was some forms you had to fill in and sign and everything.
And why, you know, you were keen to carry on, why was that?
I think sort of I wanted to carry on because I knew I was helping people. And sort of I know it’s not going to affect me because sort of the research, from what they were saying, might not get used until sort of I’m in my 50s, by the time they’ve collected it all and everything. But I think knowing that somewhere down the line someone’s going to benefit from the research is a nice feeling.

Jhon recently had some allergy tests and completed a questionnaire as part of the study. The...

Jhon recently had some allergy tests and completed a questionnaire as part of the study. The...

View topic summary
SHOW TEXT VERSION
PRINT TRANSCRIPT
Explain what the tests were and what you had to do?
There was one test where I had to breathe into a monitor and sort of it brought up a graph on the computer sort of showing sort of how quick I was able to exhale. There was another one that measured different gases that I was breathing out and sort of the amounts of them. I did a spit test, of which they took some DNA from that. I did an allergies test. They sort of put pinpricks in my arms and then they put like a liquid on to each spot and it sort of went in. And then they measured if there was an allergy and sort of they measured how big the circle was around the allergy to sort of track it and things.
Did they say what type of allergies they were looking for?
It was sort of basic sort of everyday allergies like grass, dog hairs, that sort of stuff. Sort of they explained as they were putting each drop on which one it was.
And was that all okay? Did you enjoy doing that?
I think it was sort of good because it wasn’t like, you didn’t feel pressured into doing it. It was sort of very relaxed. So sort of it was it wasn’t sort of too stressful or anything. It was sort of, “We’re going to do this now” and it was all very calm.
And did the researchers come out to do that?
Yes. They visited the school on a day and sort of we all got given, sort of someone came to collect us from each lesson and sort of we just went through it all.
So you did it all in one day?
Yes.
So you didn’t miss too many lessons?
No. It was about sort of 20, 30 minutes to do them all. And then sort of the next person got brought in to do theirs.
So it was quite quick?
Yes. Sort of while they, you might like do half of the test and while they were waiting for the next bit to load up you’d do another one. So you were like always doing something.

Jhon enjoyed taking part, but he isnt quite sure what will happen with all the data they collect...

Jhon enjoyed taking part, but he isnt quite sure what will happen with all the data they collect...

The last thing I heard was sort of that day when they did the tests, sort of just saying that I was okay. And that’s the last thing I’ve heard. They’ve said that sort of they’ll be doing the tests, they’ll look at them overall, but it’s not going to be sort of for a while until sort of, because they’re saying those surveys that have been done by parents will be used and compared with the tests. And they’ll look at you overall sort of when we’re adults, sort of so they can look at a whole childhood. And then they will sort of be looked at overall from everyone that’s been involved.

So it’s, because it’s ongoing, so it’s not going to, they’re not going to know anything till the end. So I wonder if you’ll get anything in between that to say, “Well, this is where we’re at now.”

I think it would be nice to sort of know how it’s, sort of how they’re doing with it all. Because sort of it was sort of very much, “You’re going to do this now” sort of these tests, and I’d not heard anything from them before. And I’ve not heard anything since.

Young people would like to know that the information they have given to health professionals is...

Young people would like to know that the information they have given to health professionals is...

View topic summary
SHOW TEXT VERSION
PRINT TRANSCRIPT
Do you think there’s a way of, that they could do to improve it for you?
I think it could have, sort of looking at it overall it could have been improved by just sort of that extra information being there and those updates. Sort of to know that sort of they’re not just taking that information from you and that’s it. Sort of to find out how they’re, what they’re doing with that information, how it’s been used so far and what they’re planning to do with it, and sort of how the project and the sort of, everything overall is doing.
And is there anything you, else you’d like to add to what we’ve said at all about your whole experience?
I think, no, not really. I think it’s just remembering, sort of the researchers need to remember that sort of we want our sort of results to be valued and they’ve got to sort of show us that they are valued in some way.
And is that by like keeping in touch? Or a reward?
I think sort of a selection really. Sort of keeping in touch so we know that sort of it’s still going ahead and everything. I think a, sort of on a sort of study this size obviously a reward would be, you can understand it being quite a small one. But something at least, so you know that they did sort of want them, those results and things.

View topic summary
SHOW TEXT VERSION
PRINT TRANSCRIPT
I think sort of as long as it wasn’t something that really did have big risks, sort of then, yes, I’d get involved. Obviously there’s a risk with everything, but as long as it wasn’t something like really risky, then.
When you say risky, do you mean in terms of your health?
Yes. Sort of as long as they’re, they’re pretty sure sort of they’re heading in the right route and it’s just sort of those final tests and stuff, then, yes, I think I would go ahead with it.
Previous Page
Next Page