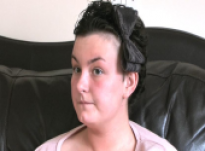 Age at interview: 17
Age at diagnosis: 16
Brief Outline: Eden was in hospital at the time of being invited to take part in the trial and because she was so poorly can't remember too much about it. Together with her mother she made the decision to take part, but it wasn't easy.
Background: Eden is aged 17, is White British and lives at home with her mother. Eden was diagnosed with Hodgkin's lymphoma at the age of 16 and very soon after was invited to take part in a clinical trial.

Eden remembers being explained about the trial and the treatment but it was quite overwhelming at the time and she can’t recall much about it. She understood there to be four different types of chemotherapy and two of the drugs had completely different side effects. She understands that the trial was to find out if treatment is just as successful by replacing one drug with another drug that is less likely to cause infertility or early menopause, and to find out what the long term effects are of each drug on fertility.

Because Eden required immediate treatment there was little time to make a decision and Eden and her mum were concerned about the side effects of the drugs. Eden, and her mum, wanted to have the drug that was least likely to affect fertility but would make her more ill. It was a really difficult time for them both. Eden received the trial treatment that had least affect on her fertility.

Unfortunately Eden experienced a reaction to one of the drugs and it had to be stopped. However, she continued in the trial and has now been given the all clear. She still receives care and treatment and has to receive a course of radiotherapy and will continue to have regular checks at the hospital. She also has home visits from the Macmillan nurses. Even though Eden was poorly during the treatment, and it is a relief to have completed the trial, she is pleased to have taken part.

Having a central line inserted was worrying for Eden, but meeting other young people who had a...

Having a central line inserted was worrying for Eden, but meeting other young people who had a...

View topic summary
SHOW TEXT VERSION
PRINT TRANSCRIPT
Eden' Because I didn’t know about the line and how it would be and they showed me on, they had a doll and I got a bit scared of it and started crying and felt dead sick. So they explained and they asked one of the kids and asked them to show me it so I got showed just how it went in and that then. So I weren’t that like sacred.
When he said they took you to one of the children, was that somebody who had had a central line in? (Yes.) And they showed you what it was like on them?
Eden' Yes because it looked different on like this doll.
Mum' We were devastated she was going to refuse the treatment she was going to walk out the hospital. She was absolutely, she became so angry it wasn’t going to invade her chest.
I can imagine yes.
Eden' Because I already had two scars on my neck and there is a hole now, I didn’t really want it so.
Is that what you were worried about having the scars?
Eden' At first yes. And then, and then like they took the plasters off they looked dead big and I started crying and that’s why I didn’t want a central line and they just faded. It’s just a mark and you’ve got to get over it.
But at the time it was quite a bit daunting?
Eden' Yes, yes.
And so did you have questions to ask about the central line, did that reassure you that they can explain it?
Eden' Yes, I felt better then when I’d seen it. But there was a kid about four and he was running round and he had crayons in his hand and he was going ‘Look, look it doesn’t mean nothing, it doesn’t hurt you, it doesn’t hurt you’ and was just running around so I was like well if he can do it I can do it.
Do you want to explain what happened each day, you know, how, what they did to you?
Eden' You had to go, you got weighed, you went and got weighed and then the consultant had to come in and check you over to make sure you were fit. And then the chemo would get sent up from the pharmacy and then you’d get plugged into the machine and it would, then it would just start going in.
And into the line?
Eden' Yes.
Through the... a tube into where they’d made the...
Eden' Yes like it clipped together.
And how long did you have to have that for, how long did it take?
Mum' Over five days, day one would be all day with all the drugs.
Eden' Yes like day one would be every drug because that was like five hours weren’t it? Day two would just be two so it would only be like two hours. And then day three and four would be just two and then day five you’d have all the drugs again together so that would be another five hours.
And when you, so it changed every day?
Eden' Yes.
And when you say the drugs is that the chemo, the chemotherapy?
Eden' Yes but there was different types wasn’t there? There was vincristine and a red one that used to go in as well.
A red one, did they all have colours?

The Macmillan nurses were really helpful when Eden had to stop her college course.

The Macmillan nurses were really helpful when Eden had to stop her college course.

View topic summary
SHOW TEXT VERSION
PRINT TRANSCRIPT
But in terms of school and that you missed a lot of school or college?
Yes I had to leave college because obviously I’m in animal care. So I mean I couldn’t like by animals or like pups or anything like young animals. And I was like mucking out and like cleaning the cages; I couldn’t be by like the dirt in cages.
So did you have to stop that course altogether?
Yes, I’d only been there for like two weeks hadn’t I? And I had to stop.
Right, did you choose something else to do?
I couldn’t, I couldn’t go back into college.
Not at all?
No.
So what happened there on that side of things?
The Macmillan nurses went into the college and explained that I won’t be back in because I couldn’t go back in because of I weren’t out of hospital to really go to college.

It was a relief at the end of the trial and the treatment, but Eden was pleased she had taken...

It was a relief at the end of the trial and the treatment, but Eden was pleased she had taken...

View topic summary
SHOW TEXT VERSION
PRINT TRANSCRIPT
So after the, when it all ended the trial, the treatment and everything did they tell you the results and everything then?
Eden' Yes I went back I had to get like x-rays on my heart and my kidneys and the consultant looked at it and he said that it had gone but it hadn’t fully gone I was just in remission. Then I have to go back every three months to have chest x-rays.
Do you still do that?
Eden' Yes I went; my last one was the 8th August that was my first one since I got the all clear.
You’ve got the all clear?
Eden' Yes.
Oh brilliant, so is that good, you’re pleased now?
Eden' Yes.
Yes and how long will, do you still have to go back?
Eden' Yes every three months isn’t it?
Yes you still go back to keep an eye on you yes. Were you, you say you were pleased to take part in the end?
Eden' Yes.
It’s all worked out okay, did it, how did it feel when the trial ended; you know you wasn’t taking part or the treatment had ended?
Eden' Relief.
Was it? Just pleased to try and get back to some normality?
Eden' Yes, didn’t have to go to hospital every day. I get on and I could go away on holiday.
And did you?
Eden' Yes.
Where did you go?
Eden' My uncle lives in Spain so I went to his.
Oh fantastic, yes. A well deserved break I think.
Mum' I think when it ends though you’re lost. Because you’ve got all these professionals and all this advice all around you and people there and then it all ends.
Yes that’s what I’m just wondering how it felt.
Mum' Your life pattern is just, I had to leave work for six months her dad had to move back in to look after her as well because it was becoming too hard for me throughout it, through her illness. Everything changes and then you’re just meant to go back to normal and it’s very hard going from sort of being closeted and nurtured by these people and they don’t turn their backs but it’s all just gone, it’s so intense, you’re life revolves around it, your times, everything has to stop. Your holidays, people coming to the house, we couldn’t have people at the house there was always fear of infection.
Did you miss, you know not miss that’s the wrong word but you know, not having that you know intensity and somebody to call? Were you still able to call on them?
Eden' Yes.
Yes, so it wasn’t like they’d completely?
Eden' No because when I finished my treatment to start I had my line in for a bit and I used to phone in because it used to get dead itchy so I used to pani
Previous Page
Next Page