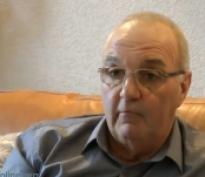 Age at interview: 62
Brief Outline: Mally was born with a unilateral cleft lip and palate. His youngest son was also born with a cleft palate as was his grandson of 7 months. Mally has recently had his cleft lip repaired again.
Background: Mally is White British, lives alone and works as a stevedore at his local docks. He has 4 grown up children from 2 different relationships and is also a grandfather of a 7 month boy.

Mally is White British and works as a stevedore at the docks in his hometown. Mally lives alone but he has four grown up children. Mally, his youngest son and grandson were all born with unilateral cleft lip and palate.

When Mally was born at the start of the 1950’s there was still a lot of stigma attached to having a cleft lip and his mother did not want any pictures taken before he had his first lip repair operation. Furthermore, Mally’s original lip repair operation did not include the muscle behind the lip and he was left with a lopsided lip. Mally grew and wore a moustache for much of his adult life in order to disguise his lip. Mally has not been subjected to much teasing or bullying as a result of his appearance during either his school years or working life and his confidence has not suffered. Mally also believes that his youngest son has not suffered any adverse effects of having a cleft lip and believes there is a greater awareness of appearance and disability issues now.

However, Mally was prompted to undergo a further lip repair when he heard that his grandson was going to be born with a cleft lip. Mally wanted to show his family that lip repair techniques have moved on since he was born– he is now clean shaven. Mally is confident that his new grandson will not experience any major difficulties from having been born with a cleft lip and palate.

Mally recently decided to have his cleft lip operated on again as his grandson was to be born with a cleft. He wanted to show his grandson’s parents (Millie and Michael) what could be done with cleft surgery these days.

Show in context
SHOW TEXT VERSION
PRINT TRANSCRIPT
When I reached adulthood and I grew a tache, you know, probably a bit sensitive to the... no, nobody gave me any you know.

And so you said you grew a moustache, so was that deliberate, to deliberately?

Yeah I grew the moustache really to hide the scar.

But... you know, literally two or three years ago I shaved my moustache off and decided to get it, you know, repaired, you know.

OK so you’ve had surgery in recent years?

Yeah I had me surgery, yeah, last year.

So was that something you’d thought about doing for a long time or what prompted you to do that?

No well I really, I did it for two reasons really: because the moustache was like a raggy hearth brush and also to prove to Millie and Michael, you know, knowing that they were going to have little [grandson’s name] their child, you know, their child, and just to prove that it could be put, you know, basically to perfection.

So how long ago was the operation then?

OK so it was around the same time as the birth…

No just before, about...

…about three or four months before [grandson’s name] was born.

So would you say that had been a prompt then?

So do you think the techniques, the surgery techniques have improved?

Oh absolutely, because I mean there’s one thing that I can say to you, when I, when I got operated on last year, Mr [name] the surgeon, said what they didn’t do when they operated on me when I was born 50 years ago, sorry, 60 years ago, is they never joined the muscle together.