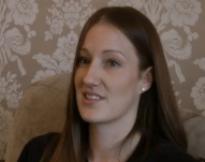 Age at interview: 27
Brief Outline: Kerrey is White British, married and has a son of 7 months who was diagnosed with a cleft lip at a 20 week scan. He was born with a bilateral cleft lip which was repaired at 6 months. Kerry and her husband had no prior experience of cleft in their families and have found both practical and emotional support in their cleft nurse.
Background: Kerrey works in the import/export industry and is married and with one son aged 7 months. Kerrey is White British.

Kerry is White British, married and has a son of 7 months who was diagnosed with a cleft lip at a 20 week scan. This was a great shock for Kerrey and her husband who had no prior experience of cleft in their families. Kerrey and her husband were given a leaflet by the sonographer and they were visited by a cleft nurse two days after the diagnosis. The nurse explained more about cleft and what to expect with regard to the care of their new baby. Kerrey was very upset by the diagnosis and initially found it difficult to talk to people about it.

Kerrey’s son was born by cesarean section and he was checked immediately by a midwife to see if he had a cleft palate but it soon became clear that he had bilateral cleft lip and that his palate was not affected. Babies born with a cleft lip can have difficulty breastfeeding, however Kerry had made a decision to bottle feed her son before his birth. However, like most cleft babies her son had to be fed with special squeezy bottles that were provided by the cleft lip and palate association (CLAPA).

Kerrey and her husband met the cleft clinical team and the couple developed a lot of trust in the professionals looking after their son’s care. Subsequently, he had his lip repaired at 6 months of age. Although the repair was ‘amazing’ Kerrey found it quite difficult to get used to the new look of her son as she had got so used to his cleft. Kerrey and her husband have found practical and emotional support through having regular contact with their cleft nurse and CLAPA. Kerrey is confident that her son’s social development will not be affected by having a cleft and they have been told by the clinical team that he will not require further treatment until he is 8 or 9 years old.

Kerrey recalls how she came to terms with the diagnosis of her son’s cleft lip and how the good care that her son received put it in perspective.

Kerrey recalls how she came to terms with the diagnosis of her son’s cleft lip and how the good care that her son received put it in perspective.

View topic summary
SHOW TEXT VERSION
PRINT TRANSCRIPT
I just wanted to say that when you find out that your child’s going to be born with a cleft lip, possibly palate, it does feel like... the end of the world.

But... when you’re going, when you go through it, and as you slowly come to terms with it, and you go through... everything that comes along your way, you know, you have the surgery, and you see, you see them recover, and you just, when you come to the end of it, you think to yourself, “Well I don’t know why I worried so much.” Because... they really have... they really have looked after him, and he really is OK. And it’s normal to worry... it’s normal to feel... like it’s your fault, but everything will be OK.

And, you know, it’s just, it’s just good to know that. You don’t feel it at the beginning but... it comes to you eventually.

Kerrey found a good level of support amongst her family and friends and found additional support through CLAPA and the cleft nurses.

Kerrey found a good level of support amongst her family and friends and found additional support through CLAPA and the cleft nurses.

View topic summary
SHOW TEXT VERSION
PRINT TRANSCRIPT
I have really good friends and close family and... it really helps, so yeah. I mean a lot of people don’t really realise that it’s not just the visual thing.

That there are a lot more things that come with it.

So you kind of had to explain that. But our family and friends were brilliant and really, really helped.

And did you find support outside your family and friends, any professionals at all that gave professional help?

The... CLAPA... team, they do tea parties, Christmas parties…

…where you can, while you’re pregnant, you can actually meet people that have had babies with cleft lip or palate.

So you can understand, you know, what, what happens next. You can... speak about how you felt when you found out, and you can realise that all the things that you’re feeling... are completely normal, and it’s just nice and reassuring to talk to these people. And these parties and these nurses were just a God send really.

OK yeah, so you found yourself a network of people there…

…that you could tap into and…

Hmm, hmm yeah I mean and they understand.

Yeah because you kind of get a bit sick of people saying, “It’s going to be OK,” because they don’t really understand.

Yeah, you want to know what’s really going to happen?

Kerry’s son was born with a cleft lip which was closed at 3 months. He is not likely to need any further medical attention until he is 8 or 9 years of age.

Kerry’s son was born with a cleft lip which was closed at 3 months. He is not likely to need any further medical attention until he is 8 or 9 years of age.

I mean the repair, you just wouldn’t even know: it’s amazing what they can do.

And you had trust in the team?

Yeah, yeah I mean we were quite lucky because we ended up getting the head surgeon.

So that made me feel great too. But I know that the whole team are amazing. I’ve seen all their work. You always see people, like the people that I’ve met, putting pictures up of their children after surgery, and you just think, “How the hell have they done that?”

OK so it sounds like it’s been pretty much a pretty positive experience for you and your family?

Once the surgery was done, yeah, [laughs] yeah.

But... they’re there standardly. Like your child might not need... speech therapy, but they’re there just in case you need them. So it’s actually quite reassuring because you know that, no matter what the severity, your child will get the help they need.

So it’s fine. It’s just the shock of seeing so many people in there just for your child.

Yeah I can imagine.

And did you feel that you were able to ask the questions you wanted to ask, you know, did you feel confident to do that in that situation?

Yeah they were really friendly and helpful. And... any questions you had, even if you thought they were something really silly…

…they were, they were brilliant. And you always, you’re always able to contact... your cleft nurse if you have any questions or queries, and they’re very good, they’ll get back to you immediately.

They believe that, because his palate wasn’t affected, that he shouldn’t need or require any speech therapy.

...He should be OK. It’s just going to be the notch in the gum now that needs to be repaired.

OK how old will he be when they do that?

OK so not for some time, yeah?

Hmm, hmm yeah it’s quite a while away, yeah.

So in terms of your son’s social development and interaction, how do you feel about that, what kind of expectations do you have about that?

Oh I think that he’s going to move forward like any normal child. I mean... it hasn’t affected his development or anything he’s doing or learning. He’s... perfectly... the same. Yeah, he’s going to be fine. Because his lip, it was only his lip and it wasn’t his palate.

Kerrey found communicating with her family’s CNS very easy when she was at home with her son and said they always returned telephone calls promptly.

Kerrey found communicating with her family’s CNS very easy when she was at home with her son and said they always returned telephone calls promptly.

View topic summary
SHOW TEXT VERSION
PRINT TRANSCRIPT
I honestly think that they were amazing. I don’t think they could do any more. I, I think ... they just need to keep doing what they’re doing.

They make you very aware of what’s going to happen. They look after you whilst you’re going through surgery and everything.

And you actually kind of end up making a bit of a friendship with your cleft nurse.

Yeah, can you tell me a bit more about that?

What, about my cleft nurse?

Yeah, don’t name your nurse, but about that kind of, tell me a little bit more about that relationship. It sounds like it’s a special relationship you have.

Yeah because she gets to, he or she, I’m assuming there’s

they get to know your son, so they, they’ve... known about your child before they were even here.

They meet them, they help them, you know, feed and... get through the hard times. And you, I don’t know, they’re just really great. They’re just really good: they’re really helpful, and any worries or concerns you have they just clear it straight up.

And you can call them any time.

Yeah pretty much. If they’re not... if they’re not able to take the call, somebody else will.

And if... their phone will be off, you can leave a message, and as soon as their phone’s on they’ll call you.

So is it just one nurse per region, per service, or are there others?

I’m not sure actually.

But I know that... when the one you deal with is off, someone else that is covering her work will get back to you, so you’re never ever stuck: there’s always someone to help. Yeah, I think they’re brilliant, I really do.
Previous Page
Next Page