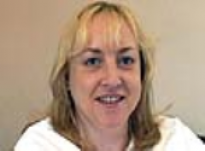 Age at interview: 36
Age at diagnosis: 35
Brief Outline: Joanne was diagnosed with CIN3 in 2008, aged 35, and treated by LLETZ. She found waiting for results difficult, though was happy with the care she received from doctors and nurses.
Background: Joanne is a single food services assistant and has a daughter Ethnic background / nationality' White British

Joanne hadn’t been for cervical screening for about seven or eight years. In 2008, when she was 35, she had her coil replaced at her local surgery and was also given a smear test. Two weeks later, she received a letter from her GP telling her that she had had an abnormal result and that severe dyskaryosis (severe cell changes) had been found. Joanne said the results letter ‘was like a bolt out of the blue’ because she hadn’t expected anything to be wrong.

After having a colposcopy, Joanne was told that she would be given a LLETZ under general anaesthetic. Because she had high blood pressure, she was given medication to help reduce it before surgery.

After surgery, Joanne took three weeks off work as she was also on sick leave because of depression. She found waiting for her results the most difficult part of the whole experience. They took about six weeks to come through and, during this time, she worried that she could have cervical cancer. She also had an 11-year-old daughter to care for, and found it an anxious and isolating time.

Results showed that Joanne had CIN3 and she was asked to attend a follow-up appointment six months later. Her follow-up tests were normal and she now has annual appointments.

Joanne said she got a lot of support and information from the Jo’s Trust website, which was ‘like a lifeline’ (www.jotrust.co.uk). Her mum and best friend were also supportive, though they lived some distance away.

Joanne praised the care she received from doctors and nurses but would have liked more time at the end of each appointment to ask questions. She said she had declined previous invitations for cervical screening ‘out of fear’, but would now be attending all her appointments ‘religiously’. She also encouraged other women to attend.

Joanne was shocked to have abnormal results. She was on her own when she got the letter and had...

Joanne was shocked to have abnormal results. She was on her own when she got the letter and had...

I had no inclination whatsoever that it would come back with anything wrong, not for one second.

And to me it was just, well it was sort of like a bolt out of the blue for me when I got the letter. Because I was on my own at the time. My daughter was, it was the school summer holidays still and my daughter was away at my Mum’s. Because I was working and stuff and it was, just kind of felt like a bomb had dropped out of my world when I got the letter.

So what did you do when you got the letter? Did it also have a date that you had to go to a colposcopy clinic?

No it didn’t. They said I would get a letter from the hospital. Which I did. The letter was for, when I eventually got the letter I think it was for about a fortnight, two weeks later. I’m sure it was about two or three weeks later. It wasn’t, I didn’t have to wait very long.

And in that time, pardon me, well while I was off work at the same time, suffering unfortunately from depression. And that made me, the way I feel even worse.

Joanne, a single mum, found it difficult because her family and close friends lived far away. She...

Joanne, a single mum, found it difficult because her family and close friends lived far away. She...

So it wasn’t a case of, I could if I was feeling down one afternoon, I could pop round for a cup of tea and a biscuit, and a cuddle. It wasn’t like that. It was a case of pick up the phone. But then I also think that to a certain extent people got sick of me going on about it all the time, because that’s all I went on about.

And I think, I’ve got an eleven year old daughter and I think she also found it quite hard because she didn’t understand what was going on at all. And she was sort of saying, “Well why, why did you have to stay in hospital after you had your operation Mum?” And I was trying to explain to her in the best way I could.

I really think that it, oh, everything costs money I suppose but a dedicated, maybe somebody who you could pick up the phone to, not somebody like, just any kind of support group. But somebody who you could pick up the phone and I would say, “Listen, I’m having a really bad day.” Who sort of, who you can talk to, who understands what you’re talking about. But not necessarily if you’ve, just for somebody who is suffering from cervical cancer, from somebody who has been diagnosed with, from small changes to high grade changes. Oh, to me that was quite an important thing.

So do you think it was harder for you in a way because you’re away from family and friends?

And being a single mother also …?

….taking care of your daughter, making sure she’s OK?

Yeah. Yeah. Yeah absolutely. I found it increasingly, I found it very, very difficult because there was some days that I couldn’t even, I didn’t even want to get out of bed and it’s just not, and that wasn’t like me. There’s some days I just used to sort of, just used to stare out of the window into space sometimes. And I should have been concentrating on getting myself fit and well to get back to work.

Joanne missed cervical screening appointments in the past but will attend all her follow-up...

Joanne missed cervical screening appointments in the past but will attend all her follow-up...

I think it’s made us look at life differently, but it’s also made us more aware how very important it is. How you have to go for these smears. You have to. And even if you end up with three, four letters off your GP you might need to go, don’t ignore them, don’t ignore them. Because I did, I ignored them. I must have ignored about four and they still managed to catch up with us when I moved house. I moved house three times in three years and they still found, and obviously I still used to get letters from them. So it was a case of, “Please go, it’s very important, it could just save your life.”

And you’ll be going for your yearly…?

Yeah, oh absolutely, yeah religiously. Religiously. Yeah, religiously. And then obviously when my daughter gets older, she’ll be made very aware of what’s going on. And in a couple of years when she’s due to have her HPV, I’ll explain to her exactly why she, why it’s vitally important that she gets this injection. Because I think it’s just, it’s crucial. The doctor, they’re like, you have them for a reason. You do have them for a reason.

Joanne had a follow-up appointment six months after treatment. If the results were clear, she...

Joanne had a follow-up appointment six months after treatment. If the results were clear, she...

So you got that letter and it said that there wasn’t any cancer?

Said yeah, there was no signs, no signs yeah.

And did it say anything about what would happen next?

Yeah, it said I would get a letter for six months time to go back for a repeat smear test. And then

Yes, at the hospital. Yeah. At the hospital, and then after that, if that was clear, what they would do was that you’d put you up on a yearly smear test at your GP’s. Yes.

So did you feel that it was clearly explained and…?

Not really. I felt a bit confused to be honest. Because I’d read other places that if you have a clear smear after six months of treatment, they’ll keep you on six monthly smears for another year. So maybe it varies from region to region.

So six months then came?

And you went back to the hospital?

Yeah, went back to the hospital, yeah.

It was basically, it was very similar to the first appointment. But obviously went over my history that I’ve been treated for. I had a biopsy and the results came back normal. And she just explained that she was going to do a smear test and then that would get sent away. Then if it came back normal, then I would go onto yearly smears.