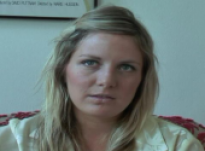 Age at interview: 27
Brief Outline: Poppy's father Adrian was diagnosed with terminal pancreatic cancer and at the point of diagnosis only had a few weeks to live. During this time he stayed with his oldest friends. Poppy also stayed with these friends so she could spend time with her father before he died.
Background:

Poppy’s father, Adrian, first became ill while visiting his cousins in Italy. Once he had returned home to the UK a close friend of his, Julie, a retired GP, recognised his symptoms and suspected he had cancer and so he went for tests. After over a week of waiting for results it was confirmed he had terminal pancreatic cancer and was told he had only a few weeks left to live. Shortly after he was admitted to hospital, Poppy and Julie decided to discharge him as they did not want him to die in a hospital. They set up a room for him at Julie’s home that opened up onto the garden. This was perfect for Adrian because he loved gardens. It happened to be sunny during this time and he spent a lot of time enjoying the garden.

At the time Poppy had not been working in her new job for very long, but luckily they were very understanding and allowed her to take the time off. Poppy stayed with her father in Julie’s house. A lot the medical side of care was left to a visiting nurse and Julie. Poppy provided him with a lot of support and comfort; she gave him massages to help him sleep, read to him and spent time by his side talking to him. Poppy wanted to devote as much time as possible to being with Adrian as she considered this time as being very precious. She was sometimes encouraged to go out and take respite time for herself. However whenever she did this, she felt anxious because she was away from him. Adrian was very popular and so he had many friends visiting him. Poppy had to manage times for friends to visit and describes his final weeks as a very social time. However, she was aware that this also must have been an exceptionally lonely time for Adrian also. Poppy is very grateful to Adrian’s friends and her friends as they have been incredibly supportive throughout.

When the time came, Poppy expected that Adrian would die very peacefully, however how this was not so. Adrian lost consciousness for a day and Poppy felt it was at that point that they really lost him. She describes how his body then seemed to ‘hold on’ and was ‘fighting to stay alive’; this was very difficult and upsetting for Poppy to witness. He died a day later. Poppy described how her father was very popular, eccentric and a nonconformist. As requested, his funeral was in the form of a garden party.

One year later Poppy describes the effect his death has had on her life. It is important for her to do things which would have made him proud of her; she takes advantage of life’s opportunities whenever she can and tried not to wallow in her loss. The experience has also helped her to clarify the things which are important to her in life, and not to worry about things which are less so.

The person who does the caring needs support as well. Poppy was lucky to have friends and family...

The person who does the caring needs support as well. Poppy was lucky to have friends and family...

I think it’s important to, everyone says know the options, know the options. We didn’t have many options so that would been, I guess, overwhelming to have to try and decide the best treatment and that kind of thing, but I think you just need to have a really good support system and someone you can trust and you feel safe with and, most importantly, you feel that, whoever, you know, your relative, is in the best possible care and they’re as comfortable, that was the thing for me, was making him as comfortable and as, kind of loved as possible and just felt as reassured as possible when, essentially, what they’re doing is going on the most difficult. When you’re so aware of everything and you have this dichotomy of being with someone and engaging with them but, actually, you’re in your own world of, “What the hell is going on?” I think it’s important for the person who’s caring to, to have a support as well and I was lucky that I had his friends and my family but they just need to know, you need to understand the disease and you need to not let it consume you though. You need to, I would say, just make the most of your time.

Poppy had never seen anyone die before and found her dads death was not as she expected and...

Poppy had never seen anyone die before and found her dads death was not as she expected and...

View topic summary
SHOW TEXT VERSION
EMBED CODE
PRINT TRANSCRIPT
And towards the end did you feel he had enough medication etcetera to help him?
Yeah, I mean he was so dosed up on morphine but I mean he was wise… Oh dear, when he was in hospital he used to, you know, they give you the button to push if you need morphine and he said he’d just push it every now and then just to make them think, you know, that he was in control. He goes, you know, “I know they’re trying to make me feel like I’m in control. So just to, you know, appease them I’ll press and they’ll be like, ‘Oh, well. That’s better and...’” You know, he was very wise to it all. But I think it was the humour was a, course a, cover up but yeah, he was given, he was given enough I think.
So he was peaceful?
At the end? No. I hope to God that he, his soul had gone before because it wasn’t how I imagined or I think anyone imagined. It wasn’t easy at the end.
Could you speak a little bit about that?
He always said, “How do you think I’ll go? Will it be peaceful?” And his friend, and she believed it, wholeheartedly, said, “Yeah, you’ll just slip away.” And that’s really what I thought would happen but it, to me, it was very distressing. I was there at the end and it was I and I and I do believe that he had gone but the body is a really difficult thing to shut down.
And it just kind of fought. It wasn’t easy. Yeah, it took, I don’t know, I’ve never seen someone die before, but it definitely wasn’t peaceful for me to watch.
It was really difficult, just. He had gone but the body was still going in a very distressing way, so and then, in the middle of all, the district nurses turned up. So they went away quite quickly but yeah, it was... yeah, it wasn’t easy to watch but, the same, you’re trying to be reassuring, if they can hear anything you’re like. I don’t know, it’s a weird thing. Yeah.

Poppy had help with the paperwork from her dads friends. When she registered the death she was...

Poppy had help with the paperwork from her dads friends. When she registered the death she was...

Yeah, I had some help from his best friends, who were absolute rocks. I mean I couldn’t have done it without them. They did a lot of the paperwork but, yeah, I mean I think it’s something as symbolic and as kind of, what’s the word? It kind of corporate, not corporate but just so formal as signing a death certificate, I found really bizarre, that process was… You know, you could just see the list of other people who had died that weekend, you know. It’s just really like a punch in the stomach and that’s only something the next of kin can do, so, you know, I found that kind of, that side of the, it is a process, when someone dies. There’s a lot of papers that need to be signed. There’s a lot of formality. There’s a lot of, you know, small things like phone bills and electricity and everything and shutting it all down and bank statements and closing the bank account, which is so final.

Yeah, I had help with that but essentially, the next of kin does the majority of that, or at least signs everything. And they were very good to be as discreet about it, my friends, as possible and just say, “Just sign this.” You know. Because they know that’s painful, to do that.