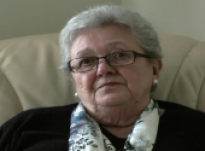 Age at interview: 75
Brief Outline: Anne's husband Jim has progressive supranuclear palsy, which is a degenerative disease. Since his diagnosis he has gradually deteriorated to the point where he is now in a nursing home.
Background: Anne is married with two grown-up daughters. She is a retired personal assistant. Ethnic background' White English.

Anne first noticed her husband Jim’s behaviour changing in 2003 when he would complain about suddenly feeling unwell, started having falls and would sleep more often. During the next three years he had various tests to examine his heart and blood with no diagnosis. One day when Jim had a fall they called his GP, however another GP was sent because his usual GP was unavailable. This GP suspected it may be due to a neurological problem and after some tests were carried out a diagnosis of progressive supranuclear palsy (PSP) was confirmed. PSP is a degenerative disease which begins by affecting balance, movement and vision and eventually may cause people to lose their ability to walk, talk and swallow, with an inability to focus.

From the diagnosis Anne describes how Jim’s falls became more frequent, however at first he was still able to drive his car and kept on top of running their household accounts. Anne and Jim decided to move closer to their daughter as they foresaw that they could use her help and support in the future. Gradually Anne had to take on more and more household responsibilities as Jim’s condition worsened. He could no longer drive, so she did all the shopping, he could no longer wash up dishes and she had to wash and dress him in the mornings. When Anne could no longer manage with showering him a carer came to help, but soon the carer found it too difficult and had to stop. It was at this point Anne and Jim decided he would be better in a nursing home. Anne explains how Jim agreed to going into a nursing home and she would not have allowed it without his consent.

Now Jim is in a nursing home and his condition continues to gradually deteriorate. He now spends much of his time sleeping. Anne describes how, “He’s here, but he’s not” as it seems his personality is slowly disappearing and communication is difficult. She describes how she feels “numb” and believes she “puts up a brick wall” to protect herself from emotions which may be potentially devastating. For this reason her daughters have been encouraging her to get some professional counselling.

Anne has had to learn to be more independent without her husband around. She explains how one of the most difficult things has been learning how to manage household finances as this used to be Jim’s responsibility. Anne is learning how to ask for help with things as she herself has mobility problems and often needs advice with technical things her husband would have previously dealt with. Luckily they have daughters and sons-in-law who are very supportive and are always on hand to help out.

Anne often feels frustrated that she cannot do anything to help Jim, except keep him company, and she finds it difficult not knowing how long Jim will live for. Jim has a living will; towards the end of his life he wishes to be moved to the hospice, where currently he spends two days each week. He also does not want to be resuscitated or be treated with antibiotics. Anne explains how Jim’s living will provides her with some comfort.

Annes husband can only eat mashed up food; when she visits him in the nursing home she sometimes...

Annes husband can only eat mashed up food; when she visits him in the nursing home she sometimes...

What else do I do? Oh, well, I feed him when I’m there sometimes. I give him his lunch. He quite likes me to do that because I’m not sort of, you know, I can let him take his time and not, he has to be fed with a teaspoon as well because too much he, his throat, it will he will cough and it will go into the lungs and there’s a danger of respiratory pneumonia coming with that. So if you give him a big mouthful he can’t cope with it. So it’s usually a small teaspoonful at a time but he enjoys his food. He eats well. So and, of course, he has to have looks like mousse every lunchtime, as far as I can tell, but if he has, say, a sponge pudding, a syrup sponge pudding but there’s loads of custard on it, it’ll all be mashed. So he can have that or apple crumble providing it’s got lots of custard on it and you can smash it all up and he enjoys that. But ice cream, things like that, he can’t eat because it hits the back of the throat and it makes him cough and that then goes down the wrong way.

Annes husband had always managed the household finances; now that he is in a nursing home Anne...

Annes husband had always managed the household finances; now that he is in a nursing home Anne...

The finances and everything, which he had always dealt with and that is the most difficult thing and I’ve said to friends, you know, that if, you know, for goodness, that they’re still a couple, for goodness sake, if you don’t do any of the family finances, learn how it’s done so that when and if you’ve got to do that. It’s better, if my elder daughter didn’t get me on the computer and teach me to do everything on the on the computer with it, I still make mistakes even after all this time, after two years. I said, “Well, I can’t make my account balance.” And she, “Oh, I’ll come and sort you out.” And, of course, fees have to be paid every month so I’ve got to make sure there’s enough money to cover that. I think that’s that, that most difficult thing.

So what kind of things do you feel you have to keep control of now that he’s in the nursing home?

Well, the finances, for a start. Learning how to live alone for the first time ever. I married from my parent’s home and where I lived, twenty two, then lived with Jim, so I’ve never lived alone. That’s not easy. Sounds as though I’m terribly dependent on people, doesn’t it? But I’m, I’m trying , I’m not but there are things that I, you know, I can’t cope with and blessed PC is a, you know, if you hit the wrong key it, I think, “Oh, crumbs. Now what do I do?” And inevitably, I have to phone up one of the girls and say, “I’ve got such and such. What do I do?” Things like that, you know, and it I suppose it, I get, I’m annoyed with myself for not being able to do it or controlling that. On the television, this switch over that we’ve just, digital thing we’ve just done this week and I haven’t a clue what to do. Okay. I could have paid someone to come in and do it but I, that goes against the grain because Jim’s always done it. He’s always been able to do these things. I’ve never wired a plug in my life. That’s an example. I can’t get up in the loft because I’ve got two knee replacements and I just haven’t got the strength in my knees to get up the ladder into the loft. So I’m reliant on sons-in-law, when they come, “Would you mind?” I mean I’ve got to ask my son-in-law this weekend, “Would you mind going up in the loft for me?” You know. I hate having to ask. But I’m learning.

Annes husband recently moved to a nursing home. Visiting him there has become a duty. Anne...

Annes husband recently moved to a nursing home. Visiting him there has become a duty. Anne...

As for me, well, I find it very difficult. I can’t I can’t see a way forward. I feel as though I’ve got a brick wall in my front of me. I can’t see under it, round it or over it until he goes I suppose. I’m grieving now but, you know, he’s not the man I’ve lived with her for fifty two years anymore. And, and that’s why my daughters thought it would be an idea for me to have some counselling, which I’m going to do.

So do you go visit him all the other days then, every day?

Well, no. Well, I interchange it with my daughter. I usually try and go Saturday or Sunday. Sometimes I’ll do both and then I won’t go Monday but I’ll go Tuesday because I just don’t feel I can go to both, do it all. My daughter might go on a Thursday. She has a busy life anyway and so she has to fit it in with her life. I know that she’d drop everything in an emergency, you know, if we got a call everything would get dropped. And my younger daughter comes up once a month with her husband and dog [laughs] because Jim does love to see the dogs. And they make a fuss of him and jump on his lap and give him kisses and he laughs. He likes it.

Because I’m limited, restricted actually, my mobility is restricted. So you know, I miss him in a, so many ways really. If I drop something or it went under a chair, you know, he’d go down on his hands and knees and get it. I can’t do that or I drop something on the floor in the kitchen, he’ll pick it up for me or he would have picked it up for me, yeah. You don’t know, just I don’t know. He’s here but he’s not.

Anne talks about the gradual changes in her husband; he is no longer the character she once knew.

Anne talks about the gradual changes in her husband; he is no longer the character she once knew.

And I said earlier, really he’s, he’s not my husband anymore. He’s a poor man who’s very ill. Okay, one I know extremely well but he’s not, the character isn’t there anymore really. The persona’s not there anymore.

And that’s been a gradual process, presumably.

It’s been gradual. As I said to you, for years now I’ve had to live a day at a time. On the one hand, I think if only he could just fall asleep and not wake up it would be wonderful for him and for me because I don’t know that I’m going to be able to cope.

Anyway, he cannot contribute anything to his own life let alone mine or anyone else’s. He can smile. He can make jokes, I can, I can tease him and he’ll smile or he’ll, he’ll try and, he always used to be able to make me laugh, you know. All during our married life I would, you know, we’ve had, we’ve had rows or arguments and but it would always sort of never ever can take, you know, continue day after day. It was, oh, what’s the word I’m looking for? Sulking. Well, he could sulk but not for long. And, and we’d end up laughing, how stupid we’d been or something, you know, and he had a nice sense of humour but that’s gone.