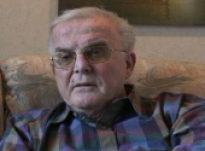 Age at interview: 68
Age at diagnosis: 63
Brief Outline: Ben was first diagnosed with breast cancer in 2003 and had surgery and tamoxifen which he discontinued after having a deep vein thrombosis. Had a second diagnosis of breast cancer in 2006 and further surgery, chemotherapy and radiotherapy.
Background: Ben is a retired health and safety officer. He is married and has 2 adult children. Ethnic background' White British (English).

Ben first felt a lump near his left nipple whilst washing in the bath. He consulted his doctor about the lump straight away. The doctor thought that it was fatty tissue but referred him for a biopsy which showed that he had cancer. He had already booked a holiday which he went on before being admitted for surgery. As well as removing the lump he had 3 lymph nodes removed which were all clear. At this stage he had no radiotherapy or chemotherapy. He started on tamoxifen which he took for 3 years, but he had to stop taking it after having a deep vein thrombosis.
Ben was then prescribed Arimadex which he took for about a year but he stopped taking it because he felt that it made him very aggressive and emotional. He started a course of Zoladex, although initially he had been told that he would not be able to have this treatment because it was expensive.  He discovered another lump closer to his armpit in 2006. This was also removed and he then had chemotherapy, followed by radiotherapy which he finished in 2006. He was initially offered a cold cap to minimize hair loss but when he first went along for his chemotherapy the nurses advised him that he would find it very cold because his hair was so short. He found the first few doses of chemotherapy quite easy to deal with but then had some problems with his veins. He found the worst side effect of chemotherapy to be pains in his arms.
Ben, as a health and safety officer, had known that men could get breast cancer before his diagnosis. He didn’t feel too shocked when he was given his diagnosis but thought he just had to ‘get on with it’ and be positive. He has been very open about his diagnosis and is not self-conscious about his scar. Like many of the men with breast cancer, he talked about how the information he was given was very much geared towards women not men.

Ben describes what it was like immediately after his operation. He was able to raise his arms...

Ben describes what it was like immediately after his operation. He was able to raise his arms...

I was admitted into hospital and had the operation and from there I remember going down and them putting a needle in me and I thought I was going to, the usual thing, I was gonna be… count to three and you’ll be gone, and I said, “Have I got a…?” and I was gone. So I didn’t get to one, two or three, and so I went down and I remember waking up on the ward because I was first in, I had been told I was first in, I woke up and raised my head and had a look and I couldn’t see anybody else awake and there was a whole ward full of people that had been operated on that morning and eventually they came round and sort of dealt with me and helped me, and from there I was then taken back to this little small unit where there was I think four people in this little unit, and stayed in there and was… I’d been given two bags, bags for blood and residue, to be taken, and then my wife came in and sort of greeted my son and my wife and… I was able, even then I’d been told that the first thing ladies, or you should try and do is raise your arms and I was able to do that and there was ladies that couldn’t do it and I was able to raise my arms straight up straight away, so I kept doing that and then trying to do all the exercises that I’d been told to do at that particular time.

Bens veins became like plastic straws and he had disconcerting pains in his arms. He lost all...

Bens veins became like plastic straws and he had disconcerting pains in his arms. He lost all...

View topic summary
SHOW TEXT VERSION
PRINT TRANSCRIPT
I was on FEC. Have you heard of FEC? I was given FEC and… the first lot I found quite easy, but by the time I got to the third or fourth one, my veins were like plastic straws, you know? The feel, I could feel them underneath and they weren’t sort of giving.
So yes, the third or fourth, and I was telling my wife that the pains in the arms… but as I sat there for each visit, because it’s sort of monthly, to let the body recuperate, I was sitting with people that were six stone and grey and I looked around and I thought “my God, I haven’t reached that stage yet” and of course I’m a very positive person, so I try to keep positive all the time and I thought “well, at least I’m progressing alright and if I can get through this, then I’m fine” and eventually I did get through it but as I say, the most disconcerting thing for me was the arms, the pains in the arms.
Just in the veins?
In the veins, yeah.
All our family know, and her family, the brothers ring me occasionally to say, “How are you doing, Ben?” because after the chemo, of course, I lost all my hair, and that’s one of the points of interest. I was offered the cap, the cold cap, and I said, “Yeah, alright, if it saves my hair falling out”, so I went along to the chemo nurses and they said, “No, you haven’t got enough hair, it’s gonna freeze your head. It’s gonna fall out anyway” so I looked at my wife so we said, “Yeah, alright, we just have to put up with it” and so, yeah, it… it duly fell out. I combed it and it started to come out so I went to the barber’s and had it all taken off, and then within a few months, it’s grown back.
Mhm. And was that hair loss everywhere, on your arms and your eyebrows and your eyelashes?
Yes.
Did it all go?
Yes.

Ben thought he perhaps received better service as a lone soldier amongst other female patients...

Ben thought he perhaps received better service as a lone soldier amongst other female patients...

One of the things I’ve found recently is I’ve… because when I go to the clinic, the [cancer unit] is that they, there’s about 200 women there in the clinic and there’s me, and I get called and sort of, the first time we went, they thought it was my wife that was getting called in, and now of course they know me, that… that it’s me, so…

Do you feel you were offered the same service as what a woman gets?
I would have thought it was just a bit better, in as much as I was a man and all of them were keen to help this lone soldier, type of thing, you know? And still today, and because I take interest in them, I go and visit them in the chemo room and say hello and they say hello, how are you getting on and they’ve seen me bald and they’ve seen my hair come back and, you know, “Oh, you’re looking good, you’re looking…”, you know? And eh… So they all know me by first name and so on.

Ben realised that the information he had been given was geared to women and that he had to be...

Ben realised that the information he had been given was geared to women and that he had to be...

View topic summary
SHOW TEXT VERSION
PRINT TRANSCRIPT
Does it mention men at all in this?
No. I was only talking to the breast nurse a couple of days ago and I said in the information pack that they sent, they said that for the operation I should bring a soft bra with me and, you know, I realised then that it was geared to women and they hadn’t really got round to… so I had to sort of temper the information but now I think they are getting there with all the information that’s available.
So at the time you weren’t given anything specific for men with breast cancer?
No.
It was just general leaflets that anyone would get?
Yeah, you had to read in, this is also men, but as I say, once it said “soft bra” I thought well, I’ve got to be careful, just… I can read it but, you know,..

Ben would have liked to have gone to a support group but what he really wanted was the...

Ben would have liked to have gone to a support group but what he really wanted was the...

Now, I see at the back here there’s a breast cancer support group?

Yes.
Did you ever go?
I haven’t been, no, no.
Why not?
Not having the time really, because of hospital appointments. They are in the evening on a Wednesday, I think, but generally we’re doing things.
Would you have liked to have gone?
Yes, and in fact… I got the impression, though, that it was all ladies there. So...
Did that put you off at all or…?
It didn’t put me off, but I wanted to relate to men. My idea was for me to go along and try and encourage men to get… and I’ve always been looking for a way of getting to get men to examine themselves.

Quite a lot of the literature, when we’ve been looking at this, talks about male breast cancer, and we’ve come across this… some people we’ve been speaking to really don’t like that term. Do you have any opinions on that?

What else are you gonna call it, then?
I think the inference is that we don’t talk about “female breast cancer.”
We just say “breast cancer.”
We say “breast cancer.”
But at the moment, if we say “breast cancer” we think of women, so I suppose you’ve got to say something that brings out the male side of it… otherwise it’s still going all to females, and as you say, it’s very pink, but it doesn’t annoy me. All I’m looking at the television and saying “OK, you’re covering it and that’s good for the majority of women, but there are two or three hundred blokes out there every year, how can we get across to… like, my son’s forty, when should he start examining himself?”
Previous Page
Next Page