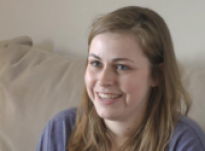 Elly has juvenile idiopathic arthritis (JIA). She experiences flare ups in her hands, ankles, knees, wrists and elbows. She currently takes methotrexate and gives herself Enbrel (etanercept) injections. The medications keep her arthritis mostly under control.

Elly is a full-time university student. She is white British.

Elly is a third year university student studying Spanish and Portuguese. She has juvenile idiopathic arthritis (JIA) and was diagnosed when she was 9 years old. She first had a painful finger which she could not bend. Over the years she experienced problems in her hands, ankles, knees, wrists and elbows. She has tried different medications with varying levels of success. She is currently takes methotrexate and gives herself Enbrel (etanercept) injections which keep her arthritis mostly under control.
Elly used to live in the United States of America. Her symptoms appeared to go into remission and she almost lived pain-free. When she returned to the UK her symptoms returned and she experienced more flare ups. As a university student she lived in Spain and Portugal as part of her languages degree. Her symptoms did not go into remission but she took the medications she required out with her. This helped prevent further flare ups in Portugal but she did struggle in Spain.
Elly finds that stress can act as a trigger for flare ups. She typically gets flare ups before exams and around coursework deadlines. The stress interferes with her sleep and this contributes to fatigue and flare ups. Elly is also prone to eye infections and mouth ulcers which she says are probably caused by the medications. She tries to say fit and healthy and used to be on the swim team in her American high school. Elly has found it harder to keep up the swimming as she has got older because her joints get tired very easily. She now goes to the gym and is careful not to exert too much pressure on her sensitive joints. In her spare time Elly participates in the University Royal Navy Unit. She would like to teach languages or help migrant workers whose first language is not English.

Elly took diclofenac to help reduce her inflammation. She also took omeprazole. If she forgot to...

Elly took diclofenac to help reduce her inflammation. She also took omeprazole. If she forgot to...

View topic summary
SHOW TEXT VERSION
PRINT TRANSCRIPT
What consequences if you don’t take them?
It’s things like, I’m not sure. The folic acid I said before is the one that they upped for my ulcers, so I guess I just get worse ulcers than normal. The diclofenac I notice, sorry if I don’t take all the time as much as I do at Uni, I can just feel it a little bit, but my joints are a bit worse than normal. And the other one, the omeprazole I have no idea ‘cos that’s to do with the diclofenac, so I should probably take that every day.
Okay.
But I only recently came on it so I’m not sure.
Are you worried about missing medications?
I only ever get worried if I miss the main ones, ‘cos like for example the diclofenac is PRN, like it’s totally up to me, the folic acid I know that I can just take it once a week and I haven’t felt any different. I probably should worry about it, but I just am quite scatty so I just forget. And whenever I remember I don’t know where things are so I’m like, I know they’re all on my floor I need to organise them and put them in one place.

Since Elly has been attending the adult clinic she has had more access to her consultant and...

Since Elly has been attending the adult clinic she has had more access to her consultant and...

View topic summary
SHOW TEXT VERSION
PRINT TRANSCRIPT
I find almost that now that I’m in the adult clinic it’s simpler. And I know that probably should be the other way around but I always feel like my doctor will happily explain anything. Whereas some doctors I’ve seen, I don’t know if it’s because when they’re , this is going to sound really harsh, but when they’re a paediatric specialist there are so few of them that they’re much more important in their field, which doesn’t sound nice in what I’m trying to say. But if so they don’t, and so you see more registrars than you do sometimes consultants.
Yeah so I’m not really sure, like I don’t remember, I think if it isn’t adolescent clinic, whatever it was, the one before the adult clinic they, the actual consultant wouldn’t talk to me as much as the registrars would, if I can remember correctly. Yeah. That is, but one difference is that now I always actually see my consultant which is really nice to actually always see the same person. And so she will always remember you, I’m sure the fact that you know they’ve only got a handful of young people helps, but I find that because you always see the same person it is much easier to tell them what is wrong, whereas when you’re younger you see different people even if it’s meant to be the same doctor. I think that is a big difference for me you know yeah.
Is it different on a personal level?
Yeah I feel like I know the doctor much better now than I ever used to again that may well be because they only see a few younger people, and so yeah I do definitely feel much more personal relationship with the doctor. I feel like she knows me you know even though I don’t know if she’d ever remembers me or if she just looks and says, “Oh yeah that one.” Which, whatever, they know and the nurse, it’s always the same nurse as well and she remembers me and they’re always like, “Ah, Mum,” or blah blah blah, and I never really remember feeling that when I was in the younger clinics. Probably because yeah as I said they only see children, whereas now it’s not like that. So I think that I have a better relationship with the doctor now than I did when I was younger. Maybe that’s because I’m doing it all by myself as well. So it’s more up to me to make a relationship.

Elly had troubles sleeping if her arm was hurting or if she was worried about something. She...

Elly had troubles sleeping if her arm was hurting or if she was worried about something. She...

View topic summary
SHOW TEXT VERSION
PRINT TRANSCRIPT
I have a lot of trouble sleeping because I like to sleep on my arm, and if I have a bad wrist I can’t sleep on my arm. And then I take a long time to get to sleep and then I worry because I can’t get to sleep and I’ve got all this work to do. So I guess yeah I struggle to sleep often because I’m in pain, and then I worry, so then I can’t sleep even more and I’m more tired, and then more things start hurting. And then yeah, so I think it’s that, it’s either I can’t sleep on my arm or my back hurts, so one or the other.
And you mentioned medication, any medications that help with sleeping.
I haven’t, I tend to just take some painkillers before I go to bed in the hope that they’ll help that.
Are they off the shelf things from the supermarket?
I’ve got a mixture. Sometimes, depending on how bad I’m feeling I’ve got, I buy paracetamol by the bucket load and I’ve also got some stronger prescription painkillers which make me feel a bit drowsy so if I’m really tired I’ll take those ‘cos they’ll help me get the sleep as well and stop the pain. So those are what I tend to do.

Elly didn’t enjoy the first two years of university as she couldn’t drink and go clubbing like...

Elly didn’t enjoy the first two years of university as she couldn’t drink and go clubbing like...

View topic summary
SHOW TEXT VERSION
PRINT TRANSCRIPT
At university I didn’t really enjoy the first two years because you go to university, everyone gets drunk, goes out to clubs, gets in at whatever time and okay cool. And I’ve done that but then at the same time, you’re on methotrexate so you can’t drink, so you don’t have any stamina to go and why would I want to go and stand in a club, when I’m just gonna be there in pain, everyone’s dancing, and they don’t care ‘cos they’re drunk and I’m the only one who’s sober and who’s like, “My feet really hurt.” So it’s, it’s that awkward thing where in the first year that’s all anyone cares about, and so it takes a while to fit in. But it’s fine, get there. And now I love it and from my year abroad I’ve made amazingly good friends with my course mates and I am as happy as a clam at University and it’s really good. It just took me longer to get into the groove than I think a lot of people. But it’s worked out now quite well. I’m happy.
Yeah. I take part in the University Royal Naval Unit. I did Sea Cadets before I went to university, and that is my other group of friends who you know, that sounds really bad though because obviously the, you combine the military and students that you’ve got at the drinking fest, but we do things that isn’t just drinking obviously, we learn about things and then I go to sea quite often.
I’ve struggled with that because you know it’s things like stand on the bridge for two hours and you know take us, be officer of the watch take us here,” and so I struggle with it but they’ve always been a lot more understanding and previously was very understanding, he was a really nice guy and would always make sure I could do it, even if it meant I couldn’t do this bit for example.
And so I found that was my other group of people and I think that if I hadn’t joined that I probably wouldn’t, I don’t know if I’d have left university ‘cos I’m kind of too proud to do that, but I really wouldn’t have enjoyed it all.
But now, since my year abroad I mean we’re all the language kids who went away and you because you’re in another country, even though we were in different cities we formed really close links and we, you know, you got to go and travel and see this city without having to pay for a hotel.
So we all did things like that, and so now I live with one of them. I live with one of the Navy people as well, so you form other links, and yeah I’m linked with them now because we would go and travel around and that, yeah I think you find other ways of making friends with people. And that’s I guess what I did and it’s worked out quite well.
Previous Page
Next Page