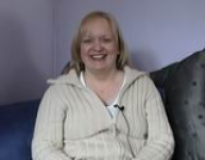 A midwife upset her by saying she was not coping well with the pain. At one point it was...

A midwife upset her by saying she was not coping well with the pain. At one point it was...

View topic summary
SHOW TEXT VERSION
PRINT TRANSCRIPT
And we had a couple of bad experiences in the middle. I mean, I wasn't coping very well with the pain, but that's, you know, a very subjective experience, because nobody knows the pain I was feeling, and I don't know the pain anybody else is feeling. So really, nobody can say, 'You're not coping.' But the midwife actually spoke to a doctor in front of me, and said, 'She's not coping very well with the pain', which made me feel I was a very bad person. And I'd tried everything. I'd had paracetamol, pethidine, baths, TENS machine, epidural, absolutely everything. The epidural was fine, but nothing was happening. And after about, I think it was about 7 o'clock the next evening, so I'd been through the whole day in labour, about 7 o'clock they decided to start giving me I think it's Syntocinon [oxytocin], which speeds up the contractions.

Anyway, I had an epidural so I'd had a little bit of sleep, but still I was incredibly tired, because it was now Saturday evening and I hadn't slept since Thursday night. And I did ask several times if I could have a caesarean, you know, would they consider it? And I kept being told, 'Well, we think we should try for another 4 hours. We don't give caesareans based on family history. It's much better for you to have this baby naturally, so let's keep going'. And at that point, I was quite happy to do so because the epidural was working quite well.

Then suddenly it stopped working and the pump on the epidural box failed, and an anaesthetist came up to try and fix it, and said it was working absolutely fine and he left. And I was still in absolute agony, and I kept saying to the midwife, 'Can you please do something about this? I'm in absolute agony', you know, my hips felt like someone was dislocating them. You probably don't really want this on your tape, it's putting people off having babies [laughs]. But eventually some, another anaesthetist, a more senior anaesthetist came up and said, 'I'm not surprised you're in agony because this epidural pump is obviously broken and it clearly hasn't been working for a few hours.' And she said 'I'll fix it for you', by which point I'd just had enough. It was now 3 o'clock on Sunday morning and I said, 'I'm sorry, I cannot wait any more. I'm not prepared to try another 4 hours. I want you to give me a caesarean at this point'. And they did eventually come back, and the doctor sort of came in and examined me and said, 'OK, we'll give you a caesarean'.

She would have liked a caesarean earlier but thought staff were reluctant because they were...

She would have liked a caesarean earlier but thought staff were reluctant because they were...

View topic summary
SHOW TEXT VERSION
PRINT TRANSCRIPT
I think there is a general feeling that a caesarean is such a bad thing that you only do it if it really is absolutely necessary. And, you know, I felt that they were trying to drive down their caesarean statistics and, and therefore I was part of that drive. And yes, probably if I'd have shouted louder earlier on, they may have agreed to do that.