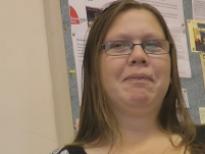 Age at interview: 24
Brief Outline: When Clarissa gave birth to her fourth child, she had a placental abruption. She had to stay in the hospital afterwards, and her baby was put in an incubator. Clarissa has had generally positive experiences with health and social services. She feels that she has been provided with all the support she needed.
Background: Clarissa has four children and is pregnant with her fifth.

Clarissa was a week overdue when she gave birth to her first child. She remembers that “everything was normal throughout” her pregnancy. However, when she went into labour, the doctors told her that she had a placental abruption, which means that her placenta separated from the uterus while the baby was still inside. Because of this complication, she had to have a Caesarian delivery. Her baby was placed in an incubator for a month, and Clarissa also stayed in the hospital after giving birth. It was very hard because she felt she “had to be strong to look after little man”, but she was also physically weak. On the other, during her stay in the hospital, she shared a room with other mothers who she found were “nice and friendly”. She is in touch with them to this day.

Clarissa doesn’t remember any complications with her previous pregnancies. She was 15 when she first got pregnant. She admits that she didn’t quite understand what a pregnancy would mean for her life, but she didn’t want to get an abortion either. She was in “proper rough” relationship back then, and she didn’t want to tell her partner at the time that she was pregnant. When he found out about her pregnancy from her father’s ex-wife, things “just got worse and worse and worse”.

Since then, she’s been in a relationship with the father of her other three children. Currently, Clarissa is pregnant with her fifth child, which is why she is visited by a midwife every week or two. She’s happy with the help she has received so far. She feels that it’s important to follow their advice if she doesn’t want to end up getting hurt. She also appreciates that the midwives she met so far are not all “stuck up” and that “they can have a laugh”. She is also visited by a social worker who is helping her find a bigger house. Clarissa doesn’t mind having social services around because she finds their advice helpful. She only had one bad experience with a social worker after she had her first child, but she feels that her current social worker is “calm” and “actually listens”.

She also receives much support from her current partner and his family. Her mother passed away when Clarissa was seven, which made her particularly sad when she was pregnant. Clarissa also has a sister and two half-brothers. Her father lives in a different town, and Clarissa only sees him when she needs to.

Clarissa’s advice to other young mothers and women who are thinking about having a baby is: “Get married first. And get a bigger house. Because once you have one, you’ll want to have four”.

Clarissa found giving birth took ages but she was so excited to see her baby.

Clarissa found giving birth took ages but she was so excited to see her baby.

Yes, but no. It's - well, I like it because I know it's a human being I've, we've created. But there's still like the after bit, like when I - in labour. To me, it didn't hurt, but it just really like - I don't know - just take ages and ages and ages and ages [toddler chattering].

But you've done it without - so you don't feel pain when you're in labour?

I do feel pain, but I don't need anything for it [toddler chattering]. Because I'm too excited to see what's coming out, I'm like - yeah, come on, push [laughing]. Don't care about gas and air, just hurry up.

Clarissa has mixed views about social services but says “they give good tips”.

Clarissa has mixed views about social services but says “they give good tips”.

SHOW TEXT VERSION
PRINT TRANSCRIPT
Some people who we've interviewed for this project, they've sort of had social services wondering if they can look after their children a lot. Have you had any of that sort of experience?

They have got social workers involved with the four - well, the three I got at home. Because it's cramped in the house, and they wonder what they're going to be like with the new baby, so. I don't mind them being around, because they're quite helpful. But it does, it does bug me a bit, because I know that I can look after them. But they give you good tips, like on what to do, and what advice to go for.

And you said bugs you, because - you know - they tell you what to do. So would you say anything to them about that, or not?

No, I just go along with them. Keep the peace. Otherwise it's never going to end, so.
Previous Page
Next Page