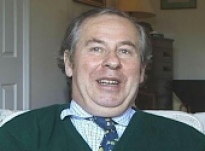 Age at interview: 58
Age at diagnosis: 54
Brief Outline: Since Philip was diagnosed with Parkinson's disease 4 years ago he has always felt uncertain which of his symptoms were caused by this and which were due to the pain he gets from a severely arthritic hip.
Background: Farmer Married. 2 children.

Four years ago Philip became severely depressed while waiting for an operation on an arthritic hip. He was put on Prozac which was helpful. But around this time his GP remarked that the muscles of his face seemed rather rigid and suggested he might have Parkinson’s disease. An appointment was made for him to see a neurologist and by the time this arrived his symptoms had progressed so that he describes himself as ‘skating’ into the consulting room. The treatment which was started helped and he found that he soon no longer needed to take Prozac. He continues to be confused about the symptoms he has since he still has hip problems and is currently waiting for the second hip to be operated on. His balance is particularly bad when he is tired, hot or over excited and he has to crash into things to stop himself from falling over. On a good day he can walk around his farm, but he is no longer able to handle lively race horses and has become stuck getting onto a horse feeling as though his body has forgotten how to do it. He has occasionally left his medication behind and has found that being without it for a couple of days has not caused serious problems but suspects that after two week he would be in real trouble.

Philip is inclined to blame his past indiscretions for his PD.

Philip is inclined to blame his past indiscretions for his PD.

View topic summary
SHOW TEXT VERSION
PRINT TRANSCRIPT
To be quite honest a lot of the time… when I was young I used to ride in steeple chases and I had a lot of falls. And for a long time I convinced myself that if I had any problems in that way they were caused by a heavy fall on the head and I am not entirely certain that that is not true. It used to be called being punch drunk. You can’t be certain and certainly when one was a twenty-one year old amateur jockey riding whatever one could take you were slightly inclined to brush the side effects under the carpet for fear that anyone might discover. So you would expect to have got the shakes through too many cigarettes or too many gin and tonics. But I don’t think it was. In the start, there may well have been some minor brain damage.

Philip can predict when he will need to sleep after each dose of pramipexole and can arrange his...

Philip can predict when he will need to sleep after each dose of pramipexole and can arrange his...

View topic summary
SHOW TEXT VERSION
PRINT TRANSCRIPT
Yes. I try to take the pills, because I know which pill does it. Exactly which pill does the damage. So what I try to do is some work first thing in the morning. Then at about 10 o’clock I take a pill and I go and try to do something but almost invariably you know… fully or flat out. But it only lasts about an hour. And again I do it in the evening because I have to take this particular pill three times. I do it in the evening. Again having tried to do something during course of the day constructive. And you feel very much better knowing perfectly well that you are going to take the pill and you are going to zonk out for an hour or around an hour. Then of course it’s brilliant at night. You take the pill and then you go to sleep.

Philip describes some of the situations where he has experienced festination and some of the...

Philip describes some of the situations where he has experienced festination and some of the...

View topic summary
SHOW TEXT VERSION
PRINT TRANSCRIPT
It’s just lurching, head down and dragging your feet. I suppose it is caused by the lack of co-ordination that goes with the disease anyway.
And the later it got at night. I remember going to parties. Because I went on going to parties. And people.. sort of going out to get into the car and going down a slight hill and not being able to stop when I got to the bottom. And everyone thought it was frightfully funny and even I thought …. And there it was. That is what I was doing.
It started out perfectly. Then suddenly finding the mind and the arms and everything like that were going forward perfectly well but the legs weren’t. That's what it felt like. You stopped the thing by stopping the skating or walking or what ever you decided it is and starting the thing again. And if one has had a drink then perhaps that process is even slower than otherwise.
You started all right and eventually you were going with your arms held out rather like.. the family called it a jet pilot. If you could stop and stand upright you could set off again and it would after a time it would go back to sort of skating along.
No I never thought of that. I think probably one needs to pause for a moment to get the thing going. I think if you stood upright and then went straight on as a natural course then you would be flat on your face in next to no time. But if you sort of give it a chance. You know these sort of receptors that control ones balance. I don’t know.
I don’t know why it seems to happen in car parks quite a lot. I don’t know why. My children are very keen on Polo and I remember going from one end of the park to the other simply by pushing myself from car to car. That was a very hot day when there had probably been a little too much excitement. I remember that quite well. It seemed the only thing to do was to push yourself back up, stand up straight then you could set off again and then you would do it again.
The motor car in the car park is as good as anything. I am sure a lot of people who have Parkinson’s disease have had that sensation.
Top of the banisters when I come out of the bedroom. I am always going there, I am going too fast by the time I arrive there. That sort of thing.
There are lots of times, most of the times, when I am on the tablets and the regime is in place that I have no problem whatsoever. But if I am very tired, have forgotten to take the pill or it is very hot or I have been talking to somebody for a long time. You know when it is going to happen by and large and you can feel when it is going to happen.
Previous Page
Next Page