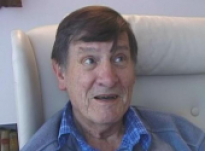 Age at interview: 77
Age at diagnosis: 63
Brief Outline: Diagnosed 14 years ago Brian was on Madopar for 3 years, When Pergolide was added it affected his heart which had been damaged in childhood from Rheumatic fever. He is now on Apomorphine, delivered by a pump into his abdominal wall.
Background: Married, 2 children. Retired Professor of Music.

Brian was diagnosed with Parkinson’s disease in 1994 when he was 63. The symptoms he had noticed were right sided stiffness and difficulty in walking. He had also noticed that his writing had got smaller and he had particular difficulty forming w’s. Before this he had felt a loss of energy but had assumed this was due to his age. He hadn’t suspected PD as he had no tremor. He was more afraid it could be MS or Motor Neurone Disease.

Once he started on Madopar his symptoms improved but after 3 years they were coming back Pergolide was added. This worked well at first except that it produced insomnia but after 2-3 years he began to notice a lot of missed heart beats and it was decided this was caused by Pergolide. He was changed to Ropinirole and then Rotigotine patches but with this his symptoms returned and were much worse than they had ever been. He was then put on Apomorphine which is delivered by a pump as an infusion through a needle inserted each day into his abdominal wall. While this works well it does also cause unexpected vomiting without nausea. He has to take Domperadine for this. He has experienced hallucinations which he attributes to the Apomorphine but thinks may also be caused by Amitryptilline which he takes to help him sleep.

He has been told he is not eligible for Deep Brain Stimulation because of his age and his history of rheumatic fever.

Brian has given up driving because he tends to fall asleep unexpectedly. He can walk a mile and is receiving physiotherapy as part of a trial. He has experienced freezing but feels he has learnt to overcome it. Though he feels it is going to happen he is able keep moving.

He has an amazing electric chair which he can change so that he lies back or can be lifted forwards and into a standing position.

Although he can no longer derive much pleasure from playing the piano and continues to have problems with w’s, he still enjoys listening to music, reading scores and carrying out research and gardening.

His wife is unable to be away from him at the moment as only she knows how to insert the needle for the pump.

He minds the fact that some people assume that he can’t take part in conversations. He is sometimes embarrassed with strangers, feeling humiliated by the fact that he tends to drool and does not readily take part in conversations. He doesn’t attend PD society meetings as he feels he might find it depressing. He avoids thinking too much about the future.

Brian got stuck in the bath at his sister-in-laws house.

Brian got stuck in the bath at his sister-in-laws house.

View topic summary
SHOW TEXT VERSION
PRINT TRANSCRIPT
I can’t bathe, not really very safely. It’s odd, I, I had a bath at my sister-in-law’s last month, I, I couldn’t get out, I couldn’t get up.
What did you do?
I eventually found a way of dong it. My wife was there. I was sending her next door to fetch a couple, a couple of men. I managed to turn, I managed to turn over so, to push up. But since, we’ve now got a spare grab rail which you can attach and take off. It, it works with a vacuum. So.
So you can, you can take it away with you?
Yes, that’s another thing that, grab rails. Friends’ houses don’t have grab rails.

Brian was put on pergolide by a GP who was not aware that he had had rheumatic fever as a child.

Brian was put on pergolide by a GP who was not aware that he had had rheumatic fever as a child.

View topic summary
SHOW TEXT VERSION
PRINT TRANSCRIPT
After a time one needs more than the Co-beneldopa or Madopar which I was taking. And it was suggested by these specialist that I should take one of three drugs in end and I went to see my doctor to choose one of them and my doctor wasn’t there. I had a locum, he didn’t really know my history. And he chose Pergolide mesilate in quite a large dose. Well it was wonderful, it loosened me up. The only thing was, I couldn’t go to sleep really, I’ve had difficulty going to sleep and that my, my voice as you can tell became rather soft. And lacked resonance.
But after two or three years of this, my, my heart started to misbehave a little. It, it would miss beats, or beat irregularly. I’d had rheumatic fever as a boy and during that time when I was in bed for five months I, could hear every beat of my heart without taking my pulse. It was a very disturbing experience. And some, something came back, my heart would miss a beat, and then jump, trying to catch up with itself. Then it was decided that they’d better take me off the pergolide. I actually collapsed.

Having done some research on the internet Brian feels confident the changes he notices are to do...

Having done some research on the internet Brian feels confident the changes he notices are to do...

View topic summary
SHOW TEXT VERSION
PRINT TRANSCRIPT
...they don’t really know what causes the cells to die. They don’t know what these strange Lewy bodies or Levy bodies are that appear in the brain. It’s a symptom something like what happens with Creuzfeldt-Jakob’s disease or senile dementia. That, that I would be frightened of but probably if I had it I wouldn’t be. But of course my memory’s not getting very good, memory, your memory, it gets worse anyway as you get older and I notice it more. Trying to remember the name of a plant or, or if somebody, somebody who I’ve recently met I can’t remember names, only nouns and names. Another rather frightening thing if, if you’re trying to give lectures. If you speak off the cuff, if the names don’t come it’s embarrassing.

Brian accepts the logic of voice training but finds it hard to keep thinking about it when he talks.

Brian accepts the logic of voice training but finds it hard to keep thinking about it when he talks.

View topic summary
SHOW TEXT VERSION
PRINT TRANSCRIPT
I’ve naturally had a rather far back voice. I learnt how to project it to give a lecture or to talk to actors, when we were producing an opera but if I’m just thinking about it, by myself in a conversation with two people I speak with a low voice. Partially because my parents quarrelled and I didn’t like the sound of raised voices. But, for, twice a week I went over to two dear ladies at the local Infirmary, the hospital and they, they got me reading phrases which came from common life, “Can I have a cup of tea?” “Has Jane rung yet?” Phrases you actually use, which I had to repeat until I almost went crazy. And I found as long as I was saying something fairly simple I could make quite a lot of noise and get my voice going in a way, sinuses here. Singers have a very rich buzzy sinuses and the, they take the voice up into it. And I found that I observed some singing teaching in a remarkable lady that my wife went to and she took me on with another pianist as a kind of dummy to, to see if she could get us to sing better. She gave me up, she said I had a Knödel, a dumpling in my throat. But I suddenly recognised the value of what she was saying. And if I could open the, the back of my throat I made an area there where the sound could mix and go up into the, behind my nose. And then again she said the, the sort of valve here which you can open, you can’t normally control it but singers can do it with a kind of sniff. Ahhh, ahh. And you get that tremendous buzz. But I, I, I found it a very, slightly unnatural, very unnatural, slightly unnatural way of talking when I just want to talk. And I have to think all the time of, speaking loud enough for the person in the next room to hear.
So it isn’t about your lungs?
No.
It’s about where you pitch the voice?
It’s, it’s the voicebox, yes. But then the throat is affected of course and you get, it’s difficult to swallow when you’ve had Parkinson’s for a long time. And that’s often what gets you. It’s not a mortal disease.
Previous Page
Next Page