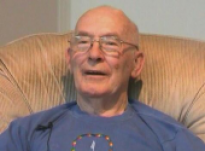 Age at interview: 74
Age at diagnosis: 55
Brief Outline: Andrew was diagnosed with PD 19 years ago. He has had the Deep Brain Stimulation operation twice. His symptoms are moderately well controlled.
Background: Widower, 2 adult children. Lives alone.

In 1990, Andrew’s son noticed a tremor in his right hand. After seeing a consultant at the local hospital on several occasions, he was diagnosed with Parkinson’s Disease.

Over the years, the tremor became very severe and Andrew was also having panic attacks and couldn’t concentrate on anything. So he was put forward for deep brain stimulation. After the operation, his tremor completely stopped. He feels it was worth going through the operation and he thoroughly recommends it.

Several years after his operations, Andrew was having difficulty walking and talking so he was prescribed Cabergoline which he’s been taking for seven years. Cabergoline has greatly helped his symptoms. Now he can walk short distances. He uses his buggy for longer distances. He feels stiff at times and has difficulty getting out of chairs. He has some episodes of freezing and has had several falls. But there are now no longer any fluctuations in his symptoms like there had been before and if he forgets to take his medication on time, he doesn’t notice a significant difference.

He also takes Selegine and Madopar and experiences some side effects, such as a dry mouth.

Andrew had two DBS operations in the 1990's and remembers hearing the doctors talking about what...

Andrew had two DBS operations in the 1990's and remembers hearing the doctors talking about what...

View topic summary
HIDE TEXT
PRINT TRANSCRIPT
The operation is a rather traumatic experience. It’s split down into three, three separate operations. The first one is they build a metal bracket over your head, bolted to your skull and they scan it to find a target area for, for inserting the electrodes. That was the first. The second operation about a week later they open up your skull again and put the electrodes in. The worst part about that is you do it under local anaesthetic and you’re four and a half hours on the table getting an electrode pushed into your brain. You don’t feel anything, and it’s quite interesting listening to the, how the doctors go about doing these kind of things and talking about broken electrodes. They try it and give it, and it’s quite interesting. The other thing is that a nurse rubs your leg, it gives the doctors an indication of the area they’re in. It’s nice getting your leg rubbed. The third operation a week later, they put a pacemaker or I can’t think of the word.
It’s like a battery?
Aye, they feed a wire up and join it to the electrode they put in a week before. And they switch it on and off with a magnet. They do a lot of [it] electronically but I do it with a remote, you just touch on and instantly the shaking, shakes were like that, instantly it stops. And that’s how it’s been for that since the last fifteen years, fourteen years. It was, it was traumatic but it was worth it. It’s all, I can’t recommend it enough.

Andrew discovered the importance of his pulse generator when the wrong setting was accidentally...

Andrew discovered the importance of his pulse generator when the wrong setting was accidentally...

View topic summary
HIDE TEXT
PRINT TRANSCRIPT
I’ll give you, I’ll give you an example. I had an appointment to see Mr, Dr, there’s the neurosurgeon, who’s taking the appointment. There’s a neurologist there, there’s three nurses, two nurses, two students. My wife came with me. We was all in this wee room and he had a new gadget, a new computer where all the information from all the patients was in this little tiny box. So what he’d done is he’d took a note of all my settings, points, all my data to get the optimum adjustment for each one and when he read it back he reversed the polarity from 2.3 to 3.2 and switched me off. Completely paralysed me, I fell off the chair and I says, “Switch the bloody thing off, switch it off.” The whole body went rigid, the wife was screaming, there were, and he switched it off he said, “Sorry about that".

The box controls amptitude, voltage, polarity. It’s about ten different things it does and I’ve got a good working relationship with the technician and he, if I feel that it’s a wee bit out, I’m getting a wee bit of tremor. I say, “ Can I come across.” “Okay.” I go across, he comes out, “Oh, hello how are you doing?” Two minutes, readjust and be away again. No appointment, just. It’s worked very well. I’ve kept it under control.

Andrew has had many hallucinations in which he sees his late wife.

Andrew has had many hallucinations in which he sees his late wife.

View topic summary
SHOW TEXT VERSION
PRINT TRANSCRIPT
I get, get a lot of hallucinations now.
Do you?
Yeah I’ve just got through a bad one. I’m back to normal but my wife and my daughter were sitting there, but they don’t talk they just stare. And my daughter’s, my daughter’s sitting at the back. It’s a hard thing to talk about.
Are they very clear the hallucinations?
Extremely, extremely clear. It’s company even though they don’t move or talk, they’re there.
How long does it last for?
Oh it’s there all the time, most of the time. It’s my daughter at the moment.
I’ve had it for a wee while. But the funny thing was the, they’re moving, and they’re talking because when I was, I’ll live with that, you know, they, they didn’t do me any harm. But one day my wife was standing at the door talking and suddenly she stopped and went into the kitchen and I went to the kitchen and says, “Why have you stopped?” No, it was hallucination. I think it was between the two operations or close to the second one, when I was getting these hallucinations. But they stopped. About six months ago I’d say they started.
And is it always your wife and your children?
No, no. I occasionally get, if I’ve had a, you’ll come up tomorrow or the next day. Somebody you’ve talked to. I went to the doctor and I said, “I’m seeing things.” “What are you seeing?” I say, “My wife.” She died two years ago.
Previous Page
Next Page