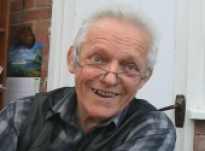 Age at interview: 67
Age at diagnosis: 51
Brief Outline: Diagnosed in 1992, Alan can't walk until he has taken his morning medication. He has ballroom dancing lessons once a week which keeps him fit and mobile.
Background: Married, 2 adult children, retired dental laboratory owner.

Alan was diagnosed in 1992. He experiences severe mobility problems, tremor in his foot and hands and his speech is affected. Mostly this is controlled with medication but until his medication takes affect in the morning, he can’t walk. He takes Madopar three times a day. Stress affects how well the medication controls his symptoms and he tries not to get too stressed by things.

He took early retirement because he was commuting to London and had a lot of face to face contact with people, which was becoming more difficult. He does his best to fill his days with dancing, learning to paint, building models and walking but he misses his job. He advises others to keep active and interested in life. He goes to ballroom dancing lessons once a week, which he finds is good exercise and he enjoys.

He got a council grant which paid for most of the costs involved in having a downstairs wet room built and a stairlift. He paid for an armchair and a bed riser.  He has disability living allowance which helps financially, but took a while to get arranged.

He sees his consultant privately once a year, which enables him to have up to an hour to talk with him about his symptoms.

Alan realises he understands his regimen better than his consultant. He knows when to take a...

Show in context
SHOW TEXT VERSION
PRINT TRANSCRIPT
The only main person that really gives you help is yourself and the carer. You have got to actually, with my tablets, I know more about how I take my tablets than my consultant. I tell him what I take and he says, “All right. Carry on then.” As long as it stops the tremors and stops the staggering around, the drunkenness - because it does unfortunately give the impression you are drunk with the mobility problem. I occasionally get strange looks in Tesco or that thinking I have been drinking that early in the morning and I am staggering around. Sometimes I say I wish I was, but it is unfortunate that [with] the Parkinson's, in between tablets creates problems. Just, you have to live with them. You don’t want to, but you have to.
And the tablets that you take. Which ones are you taking?
The prime factor is Madopar. And if you want to towards the end I will go and get the tablets and show you what they are. I take those four three times a day normally. If I am going out enjoying, if I am going out dancing then I take another boost. Whoever it is I go out with expects me to go home at 10 because that is when they all, that is when they usually finish. But it’s difficult. It is a very difficult illness to live with.

Alan's comparison of private and NHS hospital facilities is rather gruesome, but he admits the...

Show in context
SHOW TEXT VERSION
PRINT TRANSCRIPT
I mean I got my own car park space. What would I like to eat. What sandwiches do I like. So I come in, turn up, park the car in my car park space, walk upstairs talk to the lady at the desk and then come home again. I have never seen so quiet and easy going life then actually doing that, because when I go to the National Health. I was in the city I was sitting down there in the cubicle at this time and I looked at the place and there was blood from the wall, spurted up the wall and the ceiling and I thought oh God. And then a little bit later a patient died in the place, in whatever ward it is, or whatever area it is and we all got closed down and sent home. We got told it would be quite a few hours yet. So I got in my car and came home. So there is a vast difference between private and National Health. But I must admit there is not a lot of difference in treatment.

Alan believes dancing is good exercise for him because of its rhythm.

Show in context
SHOW TEXT VERSION
PRINT TRANSCRIPT
I like dancing, I get taught, I go for lessons on Tuesday morning usually and that is good for the muscles because with the Parkinsonian you need a rhythm. If you have got a rhythm where you are dancing, you can dance, there’s no problems. It is when you stop you are in trouble. If you are stuck in the middle of the hall you can’t move. But is good actually, otherwise it is good exercise. I also go walking. They are very good locally and they have a nurse who goes round with the walkers. I occasionally get taken home when the tablets wear off before I am prepared for them to wear off. So there’s lots of help locally.

Alan is determined to keep going, but admits that sometimes its a struggle.

Show in context
SHOW TEXT VERSION
PRINT TRANSCRIPT
Must keep mobile. I mean don’t give in. It is easy to say, “Oh that’s enough I’m going to bed and staying there.” It’s, you won’t win, but you will make life easier for yourself and your partner
So the main criteria for the patient is to keep fit and look after yourself. Don’t give in. Go and walk. Go and dance. Go and do something. Go painting. That sort of thing. Keep active and keep interested in life. I know it is very difficult at times because I was sorely tempted to end it all really. Because with Parkinson’s it gets on top of you. It takes over. All you can think about is what is happening next and what am I going to do next. Where are we going to. I mean holidays, the only time I use the wheelchair is when I go on holiday and then I always get preference for getting on the aeroplane. So look after yourself and make sure you look after the family because without their help it is nothing.

Alan advises people to get advice when filling in benefits forms, to be sure that their level of...

Show in context
SHOW TEXT VERSION
PRINT TRANSCRIPT
The biggest battle is getting money out of the government to pay for all the pensions and then you have got, then you don’t get the money straight away. The DLA come in, they send a nurse out, the doctor out as they did me and they work out about £14.50 a month [chuckles] and then you start thinking, “ah what are we going to do here.” And they send you a letter saying if you need this money, if not tell us and send us the money back.
So you then fight the battle of getting the carers in and you turn it into a reasonable pension with the Parkinson’s. But it isn’t easy and to get the money you want, it is not easy. You have a limit I think a maximum I think of about a couple of hundred pounds a week and that is about it really. You get a mobility allowance which is another small thing. If you are paying for your own pension which I am or was they still tax you. They still tax you. They know you may have X amount in the bank and it is not much but they still want to know how much you have got there and how much, because I have three tax offices and none of them talk to each other. I am dealing with one, two and the third one I get all the paperwork from but they don’t talk to each other. And you know you are running round. I started once with querying my tax forms and after about six months of phoning up and talking to them, well… do what you want. You know. There is nothing I can do about it.

So there is a lot of bureaucracy that you have to sort out?

Yes. The form for main payment as I say is 14 pages long and for Pete’s sake if you get this form, go to the carers or professional people and let them fill it in as it should be filled in. Don’t write down and say I’m alright today. You always put down on your form even when you go and see a doctor, for instance if you go and see a doctor or the, the registrar or whatever. Don’t say you feel great that day because most people put a face on. Go and tell them when you are ill, when it is serious, that is the time to tell them. Then they have got a true picture of you. Not like if I walked in with a happy go lucky sort of walking, staggering and sort of looked as though there wasn’t anything wrong with me. That is not it. Just express your feelings and tell them about how you are when you are really ill. And then you might get listened to a bit that more. Then you get another load of forms. But there you are.

Alan has a chair-lift, a wet-room and has bought himself an automatic chair.

Show in context
SHOW TEXT VERSION
PRINT TRANSCRIPT
You can have your house sorted out which is quite good. I mean the wet room is ideal because, though my wife doesn’t like a bath, does love baths, but the wet room actually you go and walk into it and that is it. It is curved. It is more like a hospital than actually a house, that is good. The lift is another good idea. These are all things you can get. But it takes time or who to approach to get it for a start off. You can go to the town and you can see all the stuff laid out that you can buy or use and try out and come home again. But then you see this extension or this bathroom cost about £6,000 with the chair lift and not many people can actually produce £6,000 out of their pocket, when you consider they are retired. If you spend your money you have not got a lot coming in.
I got a grant for that. It was very good. They gutted the bathroom put as I say, the fittings in there. Then we had the stair lift which is good again and then I bought myself one of these automatic chairs, so that you know it throws you out or puts you down so that you can sleep, actually it is a day bed, so you can just lay and have a sleep. I find whether it is age of not I do need a nap in the afternoon. The stair lift was a good idea. I try not to use it, because I think if I can walk upstairs and walk downstairs then it is exercise. I am doing something that is good for me.
Previous Page
Next Page