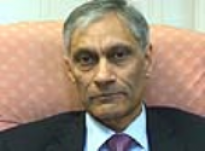 Brief Outline: Dr Ashok Bhalla is a consultant rheumatologist at Royal National Hospital for Rheumatic Diseases, Bath.
Background: Dr Ashok Bhalla provides an introduction to osteoporosis. He talks about why osteoporosis occurs; who is most at risk of developing the condition; types of osteoporotic fractures; the role or calcium and vitamin D in protecting our bones and the different treatments available up to date.

Dr Bhalla explains what osteoporosis is

Dr Bhalla explains what osteoporosis is

Osteoporosis means porous bones. Bone is made of honeycomb constructure in which trabeculae link with each other. In osteoporosis the trabeculae become thin and break leading to loss of connections between each of them. This weakens bone and makes it more likely to fracture after a minor fall. These falls thus lead to so called fragility fractures.
The medical community defines osteoporosis as a skeletal disorder in which bone strength is reduced as a result of loss of bone mass and the deterioration of the bone architecture. This then predisposes the bone to increase the risk of fractures after minor trauma.
Osteoporosis is a common condition. One in two women over the age of 50 are likely to experience a fracture in their lifetime. For men this is less common and it is estimated that one in six males is going to experience a fracture.

View topic summary
SHOW TEXT VERSION
PRINT TRANSCRIPT
Types of osteoporotic fracture
The main clinical problem with osteoporosis is the occurence of fractures. Low bone density by itself causes no symptoms. It can be interpreted as having high blood pressure. Hypertension or high blood pressure often causes no symptoms, but it is the outcome that we dread, such as a stroke or a heart attack.
Most of the fractures that occur as a result of having thin bones or osteoporosis tend to occur at the wrist or the upper arm bone, known as the humerous, the hips or the vertebral bodies that make up the spine. Fractures of the upper arm, at the wrist and the humerous, usually occur after a fall on an outstretched hand. Fractures of the hip also occur after a fall. Spinal fractures however, can occur in the absence of any trauma, they can sometimes occur spontaneously.
A hip fracture is probably the most devastating osteoporotic fracture. It requires hospitalisation and surgery to correct the fracture. It is associated with considerable risk of losing one’s independence and not being able to return to one’s own environment.
Fractures of the spine can cause considerable pain or sometimes cause no pain, but alter the shape of the spine. Multiple spine fractures lead to loss of height and a forward stoop known as a kyphosis or Dowager’s hump.

Diagnosing and predicting an individuals risk of fractures.

Diagnosing and predicting an individuals risk of fractures.

View topic summary
SHOW TEXT VERSION
PRINT TRANSCRIPT
How is osteoporosis diagnosed?
At the present time bone density measurement is the best estimate we have of bone strength. Bone density can easily be measured at the hip and spine using a DXA machine. This is a painless procedure and takes no more than twenty minutes to perform.
However, we have learned that bone density does not fully explain an individual’s risk of sustaining a fracture. Therefore there are other factors that are important. Some of these factors have been identified and include life style factors, such as smoking and alcohol. Others relate to having certain drugs such as corticosteroids.
Other factors that are important are being older, being female, having a parent who may have sustained a fracture of the hip, having had a previous fracture, having a joint disease called rheumatoid arthritis, having a low body mass index, or being low weight. Having diseases that lead to premature failure of the sex hormones such as a premature menopause in a women or anorexia nervosa in a younger person, having type one diabetes mellitus and diseases of the bowel that impair absorption of nutrients.
Taking these risk factors with a bone density allows us to predict the individual’s ten year probability of sustaining a fracture. Using such probabilities we can then decide on whether or not an individual needs treatment to reduce the risk of fractures in the future.

Dr Bhalla explains the different treatments available to someone with osteoporosis and those who...

Dr Bhalla explains the different treatments available to someone with osteoporosis and those who...

How is osteoporosis treated?

The pain arising from a fractured bone can be reduced by immobilising the bone in a plaster cast such as might occur after a wrist fracture, or surgery to align the bones in their correct position. Fractures of a major bone such as a hip do often require surgery. Fractures of the spine, causing chronic back pain and acute back pain sometimes, can also be relieved by a surgical procedure known as vertebral kyphoplasty or balloon kyphoplasty.
There are other treatments that are needed to reduce pain arising from fractures such as the use of painkillers, hydrotherapy, which is pool based exercises that reduce muscle spasm and pain and allow us to mobilise the patient. And alternative treatment with TENS.
It is important to mobilise a patient as quickly as possible since bed rest increases bone loss and therefore increases the risk of further fractures. Apart from reducing pain we are fortunate there are a number of drugs available to treat the condition of osteoporosis. These drugs fall into two groups. Firstly the drugs that reduce the amount of bone being resorbed by acting on the bones resorbing cell osteoclast. These drugs are known as antiresorptive.
The second group consists of drugs that stimulate the activity of the bone forming cell called the osteoblast. These drugs are known as anabolic agents The most common drugs used are the antiresorptives. Of the antiresorptives the bisphosphonates are the drugs of choice. These drugs are given either orally once a week or once a month. They can also be given through an injection into the vein at every three month intervals or once a year. When taken orally it is important to adhere to the instructions since these drugs are not absorbed very well if there’s food present in the stomach. Therefore most of the time its advisable that the drug is taken on an empty stomach and then one waits for about thirty minutes to 45 minutes to aid the absorption of the drug before taking any further food.
In order for these drugs to work effectively the amount of the calcium and Vitamin D your intake should be optimum. To obtain this optimum intake its best to be given supplements of calcium and Vitamin D.

For patients who fail to respond to the bisphosphonates or antiresorptive drugs, and by failure I mean their bone density is not increasing or they have sustained further fractures after one or two years of treatment, then one can resort to using anabolic drugs.

At the present time there are only two anabolic drugs licensed. These are drugs that go under the name of parathyroid hormone (PTH). They have to be given by daily injection under the skin for a period of eighteen months (see also Medication for osteoporosis).

Dr Bhalla explains the importance of calcium and vitamin D for our bone health as well as the...

Dr Bhalla explains the importance of calcium and vitamin D for our bone health as well as the...

The importance of calcium and vitamin D on bone health

Bone acts as a vast reservoir for minerals especially calcium. The body loses a certain amount of calcium in urine and faeces every day. These needs to be replaced by what we take through our diet. If the dietary intake is inadequate to replace the amount lost, then the difference is obtained from the skeleton and this leads to bone loss.
The absorption of calcium from the gut into the body is aided by Vitamin D. And therefore it is important that there is enough Vitamin D in our bloods to help with this process.
Calcium is obtained from dairy products. Vitamin D is synthesised in the skin from sunlight exposure. Individuals who are housebound or those that cover their skin are likely to be Vitamin D deficient. For these individuals a supplement from a tablet may be necessary for them to maintain their Vitamin D levels at an adequate level.
In the absence of gravity astronauts lose a lot of calcium from their bone and also a lot of bone density. Fortunately when they come back to the Earth and experience gravity this reverses. This tells us that it is important to do weight bearing exercises, as exercise helps maintains bone health.
Other life style risk factors that can affect bone health are smoking and consuming more than three units of alcohol per day (see also Food, diet and supplements).

What is bone made of and why are women more at risk of osteoporosis?

What is bone made of and why are women more at risk of osteoporosis?

View topic summary
SHOW TEXT VERSION
PRINT TRANSCRIPT
What is bone made of?
Bone consists of an outer tough shell known as the cortex and an inner honeycomb structure known as trabecular bone. Bone is not a dead tissue. It is constantly undergoing change throughout life.
In this process some bits of bone are removed by a bone removing cell known as the osteoclast. At the same site or at an adjacent site new bone is being formed by the bone forming cell known as the osteoblast. This process of bone removal and bone formation is known as bone turnover. The function of bone turnover is to remove bone that’s worn out that is not longer capable of providing structured support, and this process helps to maintain structural integrity and strength.
Bone density increases with age up to the age of 30. Most increase occurs between the ages of 14 and 18 years. After the age of 30 the amount of bone removed exceeds the amount of new bone formed, leading to a net bone loss. This slight mismatch is accountable for the age related bone loss.
In women at the time of the menopause when oestrogen levels fall, this oestrogen deficiency leads to an increase of bone turnover. In this increased state of bone turnover the amount of bone removed is not matched by new bone being formed, leading to a net result of bone loss and thereby weakening the skeleton and reducing strength and predisposing the post menopausal women to fracture from minor fall.
Previous Page
Next Page