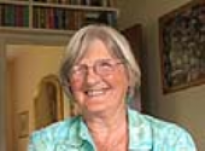 Age at interview: 75
Age at diagnosis: 75
Brief Outline: Diagnosed with slight osteoporosis in 2008 following the development of a pain between her shoulder blades; had her menopause at the age of forty but there is no maternal history of the condition. Her GP put her on medication following the x-ray results while she waited for a bone density scan. She is on alendronic acid, once weekly and Adcal D3 two tablets a day.
Background: Retired, married, four adult daughters. She has always been an active person so she was really surprised when diagnosed with osteoporosis. The condition doesn't affect her and she is able to continue living as before diagnosis.

Diagnosed in 2008. In February 2008 the bus where Alice was travelling stopped suddenly and she felt a pain between her shoulder blades. She went to the osteopath and it seemed to improve but the pain came back again a few weeks later. Her GP sent her for an x-ray and later for a bone density scan because she said that ‘two of my disks were a bit suspects’. Her GP started her on medication after she saw the x-ray; alendronic acid and Adcal D3.
After her DXA scan, she then got a letter from a consultant at the hospital asking her to attend his clinic. The consultant told her she has slight osteoporosis and asked her a number of questions including some about risks factors. Alice had her menopause at the age of forty and the consultant explained that an early menopause is a risk factor in developing osteoporosis.
Alice was concerned about having too much calcium in her diet because she is taking calcium tablets (twice a day). She had a blood test which indicated that her calcium intake was fine.
Before she was due to have her bone density scan she was sent by post a questionnaire to be filled about her lifestyle (diet, exercise, drinking alcohol, etc) but no one explained to her the purpose of the survey. She reckons her diet is fairly good and she does play golf twice a week. Regarding exercise she has always been active. She has been playing golf since her retirement fifteen years ago and before that she played Volleyball well into her forties and says that she used to play a lot of Badmington too.
Alice’s osteoporosis doesn’t affect her at all and she is able to carry on doing all the activities she did as before her diagnosis.

Alice has been seeing an osteopath recommended by her GP, which she finds helpful.

Alice has been seeing an osteopath recommended by her GP, which she finds helpful.

View topic summary
SHOW TEXT VERSION
PRINT TRANSCRIPT
Ah Osteopath. And he did some manipulations.
Yes, well, yes he, he massages mostly and. And it seemed to help for a while and then it just came something came back. I don’t know what, what happened. Why I was in pain but it did and they just discovered there were one or two of my discs were a bit suspect and then I was sent for the bone density scan.
Have you been seeing the osteopath at the moment?
Not for a while, no, no. As I say about once every four years my back goes into spasm and then he seems to cure it.
How did they your GP explain your, your back going?
Well, when I first went which was some time ago, I went to the doctor and he said to me, “You go straight back to bed.” He said, “And you don’t get out until its better.” Because my back was, you know, a bit curved with my muscle spasm so I did for a while and then, and what happened? I it was really bad one night and my husband phoned the doctor and he came to see me and I went in to have traction at hospital. And, and then I was in there for a week. I wasn’t in any pain. It was quite nice really. It was a rest and then nothing again, as I say, for a few years and then sometimes it will go. But then I’ve been going to the osteopath now because you wait such a long time for physio but two, three sessions with him maybe, two a week or something and, and it’s gone.
Who recommended you to go to the osteopath?
I don’t know. I think I asked the GP whether, you know, they would, would help and she said, “Fine, yes.”
And apart from going to the osteopath do you use any other complementary therapy or medicine or?
No, she did give me for over my shoulders some ibruprofen cream but other than that, no.

Alice plays golf twice a week so walking around the golf course gives her plenty of exercise.

Alice plays golf twice a week so walking around the golf course gives her plenty of exercise.

View topic summary
SHOW TEXT VERSION
PRINT TRANSCRIPT
I play golf twice a week and then I go out with my friends. We go shopping and wander about here and there. I don’t walk much well, I mean I don’t go for a walk as specifically but I do walk. If you see what I mean. I don’t go off for miles walking.
Would you say that you walk every day?
I guess so, yes.
Okay, and roughly how, how much would you walk a day?
Perhaps not as much as I should. I don’t I don’t know. Quarter of an hour, half an hour maybe if that.
And when you are playing golf?
Oh, it’s about four hours.
Okay, then you are up and.
Yes.
Down the slopes?
And you do lots of walking there, yes [laughs] to hit the ball so it’s, you know.
For how long have, how long have you been playing golf?
Since I was fifty about, no sixty, sorry sixty, when I retired, sixty for about fifteen years.
I used to, hockey, volleyball. Netball at school. I’ve been quite active.
Previous Page
Next Page