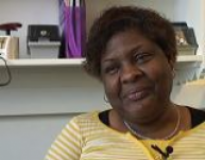 Age at interview: 52
Age at diagnosis: 22
Brief Outline: This Black-Caribbean woman was diagnosed with manic depressive psychosis in Jamaica. She says she has not been back to hospital for 6 years because she hasn't stopped taking her medication, even though it makes her extremely drowsy.
Background: Unemployed, married with no children. Ethnic background/nationality: Black-Caribbean (born in Jamaica); in UK for 9 years.

Judy is a 52 year old woman of Black-Caribbean origin. She has been in the UK for 9 years. Judy became ill in Jamaica in her twenties. She was diagnosed aged 22 as having manic depressive psychosis. Judy says she's “never really found out the truth” about what this diagnosis means. Since coming to the UK, she has been told that she is bipolar and has schizophrenia. Judy doesn't think she has schizophrenia, but says that she doesn't “even know” the meaning of schizophrenia.

Judy experienced a “massive nervous breakdown” following a relationship with a married man. Judy also believes that her strict upbringing contributed to this breakdown which resulted in her being hospitalised. Judy continued to feel very depressed. For Judy, having a breakdown means having no appetite, crying a lot, having no impetus to do anything, not being able to sleep, and sitting staring into space. Judy also describes shouting at her husband. Judy says she gets depressed very easily.

Years later Judy and her mother came to the UK to visit Judy's brother. During their stay, Judy's mother became too unwell to travel, so Judy and her mother remained in the UK, with Judy caring for her mother until she eventually went to live in a nursing home. Judy then heard that her brother had been murdered in Jamaica, and this news led to her being hospitalised.

Judy has not been back to hospital for 6 years and she thinks this is because she hasn't stopped taking her medication. Judy takes medication for high blood pressure, Sterazine to help her sleep, Procyclidine to control her shaking, Pirodel (lithium) “keeps her in the middle” and an anti-depressant (Citalopram). Judy experiences side-effects such as sleepiness, and found it difficult to stay awake towards the end of the interview. Judy has to carefully time when she takes her medication and take a nap during the day in order to manage this sleepiness. Judy's support worker at Rethink thought that Judy was sleeping too much as a result of the dose she was taking, and after discussions with Judy's psychiatrist, the dose is gradually being reduced.

Judy says that the hospital is the only mental health service available in Jamaica. Judy uses services provided by Rethink, the mental health charity. Judy feels she has been treated well by services in the UK.

To manage her symptoms, Judy goes to a sewing class and attends an exercise class. She once tried reflexology and enjoyed it. Judy is Roman Catholic and felt she is helped by the prayers said by people at the prayer group she used to attend in Jamaica and the church she attends in the UK. Judy finds comfort in prayer and attends church with her husband.

Judy met her husband here in the UK, and they married in Jamaica last year. Her husband is a source of support and comfort to Judy, accompanying her to doctors' appointments.

The drowsiness caused by too high a dose of her medication led her to fall asleep on a bus late...

The drowsiness caused by too high a dose of her medication led her to fall asleep on a bus late...

View topic summary
SHOW TEXT VERSION
PRINT TRANSCRIPT
It was a time when the bus took me away, fell asleep from downtown, the number 5 right back into [district]. I got awoke and then the surroundings wasn't familiar so I saw the driver looking at me and smiling and he said to me, 'Where, you, you have lost your stop?' And I said, 'Yes.' And he said, 'Where, where are you supposed to get off?' And I said, what's the plaza name again' I can't remember the name of the plaza but it's in [district], [district], [plaza] and he said 'No worries I'll take you back to [plaza].' Came, told him thanks, but I was a bit frightened because in the back of my mind, it's coming to me now, the bus is empty, suppose he had taken me further and suppose he had taken, suppose he was not a good busman and he taken me to rape me or kill me or rob me, nobody would know because I was living alone in [district], it was a bedsit. That's before I met [my husband]. So I walked home and I say, I have to tell my doctor this. So anyway she took me off the 5mg and kept me on three 1mg. Still sleeping. So now [caseworker] took it up and he investigated it and she recently she has now halved me on two 1mg. A day like today I'm not sleeping because I went to bed early last night just to get in gear for you.

Judy says be honest with your doctors and you'll get help.

Judy says be honest with your doctors and you'll get help.

View topic summary
HIDE TEXT
PRINT TRANSCRIPT
Yes, my first advice to people that suffer a mental breakdown especially and any other illness is to be honest and be truthful. Don't cover up the illness, don't tell your doctors no lies. And also no matter how you're feeling if you remember somebody says that work with me many years ago, just be honest and just speak your whole mind, what is happening to you and you'll get help. Because if you lie and you're not honest about it you are the one that is going to suffer' And also to top it off, to end it rather the Bible says thou shalt not lie.

Judy became sick when she couldn't cope any more following the murder of her brother and her...

Judy became sick when she couldn't cope any more following the murder of her brother and her...

So you became unwell?

And then who was it that took'

It was getting worse, because [my husband] was in the church and they were pray for me, it was getting worse, I was losing my memory. [Name] was my social worker at that time and I was living with a family in New Town, yeah because I went up to my brother, [yawns] my brother just stay, spend some time with him because when I broke this ankle, yeah, so I had to come to be alright, to go to clinic. And a woman, she's dead now, my Church sister, she offered me, said I could come and stay with them. So I eventually lived over there for six months, not that's wrong, three months and the daughter, then comes a mental breakdown. In Jamaica we say nervous breakdown, they were scared and I had stopped sleeping so I used to go downstairs and talk to myself and they talk, I talk loud and quarrelling and wake up mother and then she went to her daughter and they say I can't stay there no more, she just sick she'll have to go in the hospital. So that daughter called then at the time it was [doctor] and, [the] Hospital but my care coordinator along with my, that CPN they came from the Crisis Team upstairs and they came to the house and they took me because they see that hospitalisation was what I wanted.

And did you want to go to hospital?

Judy's keyworker recommended that she attended a group with other people from Black and minority...

Judy's keyworker recommended that she attended a group with other people from Black and minority...

View topic summary
SHOW TEXT VERSION
PRINT TRANSCRIPT
Yeah well I had a breakdown in 2001 and my key worker she recommended here. Well to cut a long story short my social worker wanted me to go to the one in [district] because that's the area I was living in and then my key worker says, 'No a lot of black people down in [another district], I want her to go there.' So I got a referral, started, from 2001 I've been coming here.

And was that important to you to come somewhere where there will be other black people?

Yes my own people.

Who I relate to them. I'd just had a breakdown and it never really mattered to me, whether white or black, I'm not racist but when my key worker said to me here, oh, they used to have cooked lunch here, that was a part of me coming here. And it's straight from hospital you come here but I never come straight here, I had a relapse and then they got me in here, my doctor referred me here.

So you didn't mind whether there would be other'?

No whether [district] or'

Okay do they have particular services here, particular activities here?

Yes we had a lot and I was involved in a lot. Well, one of the workers, one of the staff left and I started doing the cooking, the man just asked me if I would cook, because I used to do lunch and everybody was excited and please at the different taste of Jamaican food. Yes, sorry, sorry you weren't around to have some of it. And then so after cooking, [local] College had a computer course here and I was, I was a part of that course and they had a van and they used to take us out on day trips. I enjoyed that, different places. And I got to know the staff and we all got along and the clients, we all got, and a women's group used to go out on trips or sometimes they'd stay in and watched a movie. The only time I didn't come down, I didn't join the Wednesday social space and I didn't come down on a Saturday because I had my housework to do. But I prefer here, always, although if I'd gone to the [district] group it would be walking distance from my house to the group. A lot of shops was there where I could do the shop or if I had more money I could, but after they brought me here I said here is near the town, I can easily run into town.