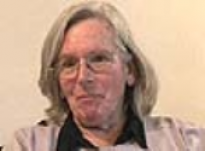 Age at interview: 72
Age at diagnosis: 61
Brief Outline: Susan was diagnosed with myelodysplastic syndrome eleven years ago on a routine blood test. She has not had any treatment and is healthy and enjoying life although she gets tired and has to pace herself. She has a check up every two months.
Background: Susan is a retired teacher. She is widowed with 2 adult children plus 4 step-children. Ethnic background: White British.

Susan has had trouble with her joints over many years and has had five hip operations. She was having regular blood tests because of a mild heart problem when a reduction in her white blood cell counts was noticed after her second hip operation. A bone marrow sample taken from her breast bone confirmed a diagnosis of a condition related to leukaemia called myelodysplastic syndrome (MDS). Susan was told she may only have six months to live. She was not offered any treatment but was warned against getting too tired and that if she picked up any infection it should be treated with antibiotics.
Susan had regular blood tests which showed that the white cell count had stabilised but at a low level. She had one nasty bout of bronchitis while abroad on holiday but recovered with antibiotics. She experienced no symptoms of MDS at the time of diagnosis but nowadays experiences fatigue and has to pace herself. Eleven years after diagnosis she is healthy and active. She enjoys walking her dogs, gardening, and doing things in her local community. She feels that her condition hasn’t affected her life very much. She has a check up with her consultant every two months.
Susan and her doctors think it likely that her MDS developed as a side-effect of a pain killing drug called indomethacin that she took for her hip problems, which is known to sometimes interfere with blood cell production in the bone marrow.

When diagnosed with MDS Susan had been given a life expectancy of 6 months, which prevented her...

When diagnosed with MDS Susan had been given a life expectancy of 6 months, which prevented her...

View topic summary
SHOW TEXT VERSION
PRINT TRANSCRIPT
Do you think having this illness has affected the way you feel about yourself as a woman at all, your femininity?
Oh Lord yes.
Oh, really. In what way?
I had a very happy second marriage and he died quite suddenly in what, ’95. And I still felt quite young and I didn’t in the least want to start another relationship because I didn’t see how I could, in honesty, what with being told I’d got MDS and possibly six months. How do you warm up to somebody and allow them to get fond of you and then tell them, well, he’ll probably be looking after me dying and I might not last that long and, tough, you’ve drawn the short straw. No, it was a great curtailer on that front. And I would have liked to have, you know, I would even have married a third time and been happy if I’d not had this hanging over me. But it seemed to me an inappropriate burden to put on other people.
But now that you’ve survived…
I’m sorry.
…ten years.
Well, perhaps I made the wrong decision but it was still, I wasn’t to know.
It’s not too late.
I don’t know. Yeah, I occasionally think about it. Yes, I’m fond of my men folk.

Susans MDS is being monitored not treated but she has to avoid getting overtired or catching...

Susans MDS is being monitored not treated but she has to avoid getting overtired or catching...

View topic summary
SHOW TEXT VERSION
PRINT TRANSCRIPT
Anyway, I wondered what advice there was. I was very pleased that they didn’t offer any treatment. It seemed to me that the treatments were going to be much worse than the complaint. But the main advice was caution over not getting too tired. Well, that was, I was by then widowed and was living on my own, yes, I think the last of the boys had, no, he was here. And I had one son at home for a little while more. But the other caution, apart from not getting too tired, was that any infection should be dealt with with antibiotics and not allowed to let rip, and even intravenously and come straight into hospital. Well, very soon through seeing my GP, who’s also been most helpful and quick to respond, we realised we could do most of this with oral antibiotics and we didn’t need to go through panic stations each time.
So have you had any kind of treatment at all for it?
Hurray. No, nothing. Nothing, except of course antibiotics, but no not intravenously except, oh, during the hip operations they have done intravenous antibiotics, certainly where the infection risk was probably at its peak. But in between times, even those wounds healed up remarkably well, they really did. And I managed to get out of hospital on the fifth or sixth day, which is not bad, especially as they were not cement jobs but sort of grow together ones on crutches.

Susan no longer travels to the USA where her son lives as the travel insurance is too costly;...

Susan no longer travels to the USA where her son lives as the travel insurance is too costly;...

View topic summary
SHOW TEXT VERSION
PRINT TRANSCRIPT
I mean my story may be better than average but I mean it’s really not affected my life that much except I cannot get travel insurance. You have to declare your conditions, I mean apart from five hip operations and all this other sort of stuff that goes with it, they don’t really want to cover you except at an exorbitant price, and certainly not for the States and Canada where one of the sons lives, which is a bit upsetting.
So do you go anyway without the insurance…
No.
…or do you not go?
No, not across the Atlantic, no. I think it’s the height of folly really because you could end up with an enormous bill for somebody else to sort out.
Have you asked Cancerbackup, for instance, about companies that will insure you?
No.
Because I know that they have a list of insurance companies that will insure people with cancer. I’ve no idea what the premiums are but they do have a list of special companies.
Well, Leukaemia Care produced some and I managed to do that for ordinary short trips of ten days or something in Europe, and it’s not exorbitant. But you’ve still got to declare everything through their normal sort of medical check system.
Previous Page
Next Page