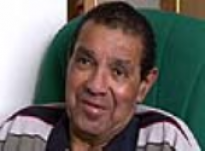 Age at interview: 64
Age at diagnosis: 64
Brief Outline: 'Ace' was diagnosed with acute myeloid leukaemia on a routine blood test while waiting for a hip replacement but recognises with hindsight that he had lost weight. He is having arsenic-based chemotherapy in a clinical trial, which has achieved remission.
Background: 'Ace' is a retired musician. He is divorced with no children. Ethnic background: Black Irish/American.

Ace had waited over a year for a hip replacement operation when his surgeon told him he couldn’t operate because of the results of a blood test he had had. He was referred to another doctor who took two bone marrow samples. When he returned for the results Ace was told that he had a type of incurable cancer, the name of which he could not understand. He was very shocked and went straight to the pub and got drunk. His 88 year old mother, whom he lives with, was very upset, as were the rest of his family, and the news spoiled their Christmas.

After Christmas the doctor phoned him to say that she had told him the wrong diagnosis and he actually had acute myeloid leukaemia and should go to the local cancer centre and expect to be kept in for treatment. He went and was given strong chemotherapy over six days through a central line in his neck. After he was sent home the line became infected so he was readmitted to hospital for the infection to be treated and the line removed. At his request a replacement line was fitted in his arm rather than his neck, which has caused no problems so far.
Ace then agreed to take part in a clinical trial of an arsenic-based chemotherapy. He has so far had four blocks of treatment with breaks in between, which has put him into remission and he feels well. He hopes to continue with four more blocks of treatment but has been worried by a letter he received from the local Primary Care Trust saying that they may not continue to fund it. Meanwhile he takes strong painkillers for his hip and walks with a crutch. He hopes that his operation will go ahead after the chemotherapy.
Ace had to give up his work playing in a band because of his bad hip and has been living on state benefits. However, these will stop in a few weeks time when he reaches his 65th birthday, and be replaced by a state pension. Ace expects the pension to be less than his current income, so says he will to have to go back to work, when he can, to bring in more money.

Ace is attending a day unit for intravenous chemotherapy with an arsenic-based drug several...

Ace is attending a day unit for intravenous chemotherapy with an arsenic-based drug several...

View topic summary
SHOW TEXT VERSION
PRINT TRANSCRIPT
I was having, well I’ve, about three times a week. Twice, three times then it could be five times a week, then, it’s then cut down, then you have, you do a circuit of four lots then you have, what can I say, a couple of weeks off. You know, you don’t have no treatment at all, they just take blood out, make sure your bloods or everything is all right, you’re not suffering from any upset, colds or anything.
But when you’ve got to have your chemo that you’ve got to have, oh, you go there and then they’ve got to take blood, then that goes to the path lab, then it comes back, which is a couple of hours. Then they’ve got to administer the chemo, if everything’s all right, give you the chemotherapy, which is two and a half hours, three hours. So you’re there, I’ve left at half past eight at night, I haven’t got home until half past eight at night, except if your blood isn’t right or something’s wrong, you know, then they’ve got to wait until everything’s, they’ve got to put you on a drip with potassium or magnesium. And I’ve got home literally at half past eight at night and I’ve been there at eleven o’clock in the morning. It’s very tiring but then it’s got to be done. You don’t want to die do you?
So when you have your arsenic chemotherapy you don’t have to stay in hospital do you?
No, I go to a day, what do you call it?
Day unit, day centre?
Day unit. They have a day unit and they, well, as I said, they can be a couple of hours, three hours or four hours, or it could be, if it doesn’t work, but they administer it, you know, you’ve got to be there twice a week. Like, you have it on a Monday then you got to go back on a Wednesday and then a Friday, or something like that.

Ace was surprised that he wasnt sick when having chemotherapy, thanks to the anti-sickness...

Ace was surprised that he wasnt sick when having chemotherapy, thanks to the anti-sickness...

View topic summary
SHOW TEXT VERSION
PRINT TRANSCRIPT
I haven’t been sick with it at all, which is incredible. I mean I had my own room, and people next door to me were always in a terrible state, being sick all the time, and it does affect people like that. But I was fine. I was really fine, great, you know. They give you a sickness tablet before you have your chemo, and also why I used to take some home with me and I used to have one when I had my breakfast in the morning plus what I’ve got to take my tablets in, to get a lift down to the hospital, you know, the ambulance pick you up and then they gave you another one, so it was a safeguard. But I wasn’t bad at all, which is incredible. Even with the heavy chemotherapy I wasn’t bad, which was incredible, and everybody else was sick, you know, which is not a very nice thing.

Ace stopped work as a pianist because of a bad hip and has been living on benefits throughout...

Ace stopped work as a pianist because of a bad hip and has been living on benefits throughout...

View topic summary
SHOW TEXT VERSION
PRINT TRANSCRIPT
Had you already retired when this happened?
Well, I wasn’t doing a lot, let me put it this way. I mean I couldn’t carry any amplifiers about because of my hip. I was a musician and I couldn’t really, that was it for about twelve months or two years, I couldn’t walk properly so there was no point in me trying to do it. I mean I used to sing in a pub or something like that, playing the piano or whatever after I left the band I was with, and that was that. I had to give it up really. That was it.
So how have you managed for money?
Well, I’ve been on invalidity money, you know what I mean, tell you the truth, it’s been hard but I mean I get the top rate but I mean that’s finished now. And I had a quote, only a quote, I know, but I mean I did find out, you can ask the pensions people how much you’re going to get, and it’s £69 a week. That’s a lot of drop from what I was getting, so they’re going to make it up with pension credits or summat and something else and so I’m hoping I can manage.
So you were on one of the benefits and that’s actually stopped?
Yeah, it stops when you’re 65.
Ah, right. So it hasn’t quite stopped yet?
No, no. I’ve got a couple of months. But other than that I shall be back to poverty I suppose. You know, I’ve got a couple of pounds here and not a lot, nothing to shout and bawl about. But that’s only going to last about four or five months and that’ll be gone, you know what I mean.
So, I mean is…
But I mean it’s obvious that as soon as I can get fit and all that I shall go back on the piano. I mean I haven’t played for such a long time and it’s going to take me a good six months to get back into it. But I haven’t got a piano at home now so I’ve got to find out where I can go and get practice and, as you know, practice makes perfect. And I’m a virgo and I do like to do things right when I do things. So it won’t take me long to get back in. I mean it’s like riding a bike isn’t it? And I was very fast playing the piano so it’ll take me six months, seven months, get back into it and then we’ll start with a new hip and a right frame of mind.
So…
I hope it works out that way anyway.
Yes, so do I. So will you be going back to work purely for the money or because you want to?
Oh yes, I mean I have to, you know what I mean, I have to. I don’t think I can manage because I do like a dram. I mean there’s nothing worse than walking in a pub, have one pint and then have to walk back out again because you can’t afford it. And I’ve never done that in my life, but I mean you have to watch your pennies. And mum’s, you know, I mean I don’t know how long I’ve got mum for. I live in a council house so I mean obviously, it’s a three bedroom house and they ain’t going to let me stay there. They’ll have to chuck me out and give me a small flat somewhere, I don’t know, or whatever. It’s got to, I mean if I can’t walk properly then it’s got to be on the basement. I’d like to get somewhere like a, with the warden there, or something like that. I’ll have to, you know, it’ll have to be somewhere like that. But it’s all worry you don’t think about but you have to plan things for t
Previous Page
Next Page