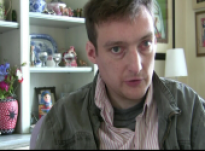 Age at interview: 38
Brief Outline: Sam has Familial Dysautonomia, a hereditary condition which affects the autonomic nervous system. Sam tries to focus on what he can do rather than dwell on the things he can't.
Background: Sam is an actor. Ethnic background/nationality: Jewish.

Sam was born with Familial Dysautonomia which is a progressive disease of the nervous system. Sam describes a childhood in which he spent a lot of time in hospital and relied on his mum considerably. After school, Sam attended a residential college to learn life skills with other partially sighted people and met his best friend. Sam describes feeling happier with his life once he started at the college. He then attended a second college to do a drama course which he enjoyed less because there were more restrictions on what he was allowed to do. Sam got a B.Tech National Diploma in Drama and joined the Chicken Shed theatre company and the Actor’s Centre. He has worked in various productions over the years which he has enjoyed but has yet to achieve his ambition to get a part in an episode of Eastenders.
A reduction in his eyesight over the past few years has been problematic for Sam. He describes feeling “blue” at times but tries to concentrate on what he can do rather than focusing on what he can’t. Recently he has been the subject of a documentary which he enjoyed and he hopes to do more travelling in the future.

Sam tries not to reflect too much on the negative experiences he has had.

Sam tries not to reflect too much on the negative experiences he has had.

View topic summary
SHOW TEXT VERSION
PRINT TRANSCRIPT
I mean like I’ve said earlier, when I was growing up, up to I became 18, I sor… I didn’t think I could do stuff on my own, and relied too much on my mum, and it got everyone else down and I, I the thing is, having this thing you also don’t know if you’ve hurt yourself like. I mean when I fall, I wouldn’t know if I’ve broken anything, because I don’t feel pain. That is part of it, you don’t feel pain so you wouldn’t know if, I suppose you actually would know if you did say break a leg, because that wouldn’t really hurt even someone like me, because I suffer from pain and ..
But I think the main hard thing for me has been my eyesight, especially in the last few years. I mean up till probably about five years ago, I could play pool and do things like that, but now I can’t I realise, my eyesight is not as good as it was, and I can’t seem to play much sport any more which is a big shame because I’m a big fan of sport and I used I used to play pool. I used to have a pool table when I was younger. I used to play pool and snooker and yes, but now I don’t seem to do much of that anymore. So that’s a bit of a shame. Any sort of sport, I do know I was going to the gym twice a week so… [laughs]. So that’s, it’s pretty you try not to let the bad things get you down as much.
You try and do things to enjoy so stop you thinking about the horrible stuff, the things you don’t want to talk about and things you…. I don’t want to, there’s things from my past that I don’t want to talk about that are a bit dark and may be, things I don’t like looking back, and we used to live in [place name] and, and, which is about five minutes away from here, and when I’m in a cab and I go down there, I close my eyes so I don’t have to see it, and it’s, it’s….
I think I started feeling more happy with my life when I went to college in [county]. Back in ‘89. And that is when, alright there was a lot of people there on site to help you if you had problems and teaching you things like mobility, and life skills and things like that, and, but you, once you’re done past the mobility routes you can do what you wanted to do with your friends. And because I think there was a lot of other people there who... There were other people who were blind and partially sighted. So we were all there to help each other, and that was the best thing about college is meeting my best friend, who I’m still friends with now so. I mean he is totally blind, so, we help each other out and …
And so, yes, I mean I try and do as much, many things as other people do, but of course there are some drawbacks sort of things, I can’t do. So you, you, you put up, you have to put up with it. Those are the cards you’ve been dealt, so [laughs]. But things could be much worse so… I don’t know what else to say about.

Sam hasnt had a proper relationship yet and found it reassuring when his doctor told him that...

Sam hasnt had a proper relationship yet and found it reassuring when his doctor told him that...

View topic summary
SHOW TEXT VERSION
PRINT TRANSCRIPT
Why do you think that’s related to your illness the fact that you hadn’t [had a relationship], up until that point?
I thought it was. But then I talked to my doctor in New York, and she said, “No, not at all.” Because people with dysautonomia have had relationships with people who don’t have dysautonomia and they’ve had kids with them and they’ve led a normal life, a normal sexual life. And yes, so you think if they can have some fun and enjoy life and then you see your friends from college married, kids, my brother’s married, got married January last year, and you see how happy he is and you think you want some of that. And that’s what I want eventually. Hopefully I will. I’m not that old. I’m only 38. I think I’ve still got the faculties. And so, yes, and out of all our college friends [name] and I are the only ones that are not with anyone, so… But I’ve got a lot of female friends and they’re fantastic friends to have. And it’s so nice having them there, knowing they’re there, and… I mean one of them said to me, “You don’t want a girlfriend Sam. You can’t do the things you really… you’d have to stop doing the things that you want to do. And you have to make things with the other person, you have to deals with them.” Not, well you know what I mean, so you can’t. So, and she’s right. So… But there’s some days you think, when you’re feeling blue you think I’m feeling blue, yes, I want a girlfriend. And other days you don’t think about it.

There are only a few people with Familial Dysautonomia in the UK. Sam is in a documentary that...

There are only a few people with Familial Dysautonomia in the UK. Sam is in a documentary that...

View topic summary
SHOW TEXT VERSION
PRINT TRANSCRIPT
I have meet a few people that have had it yes. Actually two people I’ve met. One of them had it severely worse than I did, and another one was working at the World Trade Centre on September 11th and so yes, I’ve met some interesting people who have got the illness. FD, FD is the other name for it. So, not many people, unless you’re Jewish, not many people know about it, know about this illness so…
And have you joined a support group or anything like that?
No I haven’t. I’ve always been asked if I wanted to but I haven’t no. I don’t, I don’t know, I’ve gone to disability days that have happened in New York. There hasn’t been any in this country, maybe there has been. Because there’s only about four or five of us with it that live in [city], the rest either live in New York or Israel. So it’s a pretty un-well-known illness. I mean one good thing about this film that I’m doing and doing this review it’s going to tell people more about FD. So and hopefully that’s what we want, and this thing I’m doing in America to help the genes and the growth and things like that about, I mean how different science is now to what it was like 30 years ago, even before I was born. So yes.

Sam explains what life is like with Familial Dysautonomia; the frustrations and the things he can...

Sam explains what life is like with Familial Dysautonomia; the frustrations and the things he can...

View topic summary
SHOW TEXT VERSION
PRINT TRANSCRIPT
I have an illness called dysautonomia which means you have trouble with your immune system. And I don’t get tears like other people do, and I have trouble, well I used to have a lot more trouble when I was younger with my oesophagus and things like that and episodes where I used to get rushed into hospital and things like that, and really life’s been….
In the last twenty years of my life has got much easier than it was when I was growing up, when I was a kid and a teenager and things like that. So, it wasn’t… I’m an actor and I try and do as many different able things, as able bodied people do, to try and just lead a normal life. And not, but sometimes, you I sometimes try not to think about the illness and sometimes there’s things that bring you down and you can, well I don’t know if all people with, with dysautonomia like me get depressed or gloomy. They probably do. I mean all people with dis… disabilities probably do get blue sometimes because you do get very frustrated and you can’t do things like other people do. Like you can’t just go out the house and hop on a tube and hop down to the airport and fly off somewhere without having to organise things which is a bit annoying. You wouldn’t be able to do that, so … So … that gets very frustrating.
Then there’s other things that you enjoy, you know what I mean, I could still go out and do things like normal people do. Have a very good life and I’ve been very fortunate with life and it’s…
Previous Page
Next Page