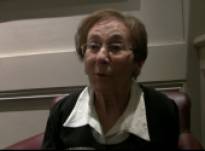 Age at interview: 75
Brief Outline: Deborah was diagnosed with a Factor XI Deficiency of less than 1%, aged 45. She has fresh frozen plasma before, during and after any surgery. Her younger son was also found to have a deficiency of less than 1%.
Background: Deborah is a retired secretary/foreign correspondent and translator. She is married with two children. Ethnic background/nationality: Jewish English

Deborah began to bleed heavily after surgery, when she was in her 40’s, and had to have several blood transfusions until a consultant suggested that her blood factors were checked. She was diagnosed with a Factor XI Deficiency of less than 1% and spent several weeks in hospital having transfusions of fresh frozen plasma. Family members were screened and Deborah’s younger son was also found to have a deficiency of less than 1%. Deborah was told at the time that this condition was only found among Ashkenazi Jews.

Deborah describes how procedures have changed over the years but she generally has fresh frozen plasma before, during and after any surgery. She says she remains conscious of the condition because it may cause problems, but overall, has not worried about the condition because she has been well supported by the medical profession and members of her family who are medical professionals.

While her Factor XI deficiency does not affect her much in everyday life, Deborah thinks its...

While her Factor XI deficiency does not affect her much in everyday life, Deborah thinks its...

View topic summary
SHOW TEXT VERSION
PRINT TRANSCRIPT
I don’t think about it in every day life, but I am, you know, I’m conscious of it. You have to be conscious of it, because otherwise it could cause problems. So I know that if I have to go for a procedure or something, I have to tell whichever consultant that I’m seeing that I have this problem.
It was about three or four years ago, I fell and broke my wrist, and when I went into have my x rays and cast put on, I had to tell them that I was a bleeder, and of course, they gave me a few more x rays and things like that, than normally a person would have, to check that there was no internal bleeding or anything. But it just so happens it was a, just a straight fracture. There wasn’t any particular problem. It was just a nuisance [laugh] but I didn’t have any bleeding problems from it. So … But you, you have to be conscious of things like that, just to explain it, just in case, just to be on the safe side so.

View topic summary
SHOW TEXT VERSION
PRINT TRANSCRIPT
Would you have a message to anybody about your experiences, who might have found out they’ve got Factor XI​ deficiency.
Well I would just tell them to be aware, and it’s a good idea to, well they would only be aware that they had that deficiency if they had been to haematology. They would have found out through blood checks. But always if you’re having any surgery or any procedures done, always tell the surgeon that you have this problem. I know that there are certain little procedures that could be done, and when they hear about it, sometimes the surgeons are scared to go ahead with something, because they think, oh she’s going to bleed, it’s going to affect the... I might get sued or something like that, so it doesn’t happen that way, it there’s always a remedy, a very easy remedy now.
And I know my son said, “Having fresh frozen plasma injected into you”, he said, “It’s like having a transplant,” [laughs]. You know, your blood is going into your veins and everything. But if you have a blood transfusion and you bleed it’s the same thing, that’s going into your veins, just the same. So there’s no danger with it really. It’s just the case, it’s a nuisance. But you have to be aware and to tell whoever you’re going to visit that this is going to happen.
I think, also I was told that even if you have a dental extraction, or some gum surgery, or something like that, you should always tell the dentist to be aware, just in case. It’s very rarely anything happens with small type of procedures like that, but you have to be aware, just in case.

Deborahs consultant diagnosed her with Factor XI Deficiency after asking her where her parents...

Deborahs consultant diagnosed her with Factor XI Deficiency after asking her where her parents...

View topic summary
SHOW TEXT VERSION
PRINT TRANSCRIPT
Well I went into hospital to have some surgery. I was having a repair job done and I had the surgery, and ten days later I was to have the sutures removed, and just before that I started to bleed. At the time they just tried to stop the bleeding, and I went up and had sutures removed. And the bleeding just continued. They couldn’t stop it. So after a day or so I was taken into intensive care, and then I was whisked back up into the theatre to have another repair to stop the bleeding. And I was re-sutured, brought down, everything was fine, kept under observation and I started to bleed again. This was another week or so after and I was taken up to surgery again, and re-sutured again. I came down and a week later started to bleed again.
I was given blood transfusions at that stage. I had blood going in. I don’t know how many pints of blood they put into me, but eventually, my original physician who was working in the hospital bumped into my husband and he said, “Have they checked all the factors?” And he said, “Well I’ll find out.” He mentioned it to the surgeon and eventually the Head of Haematology came in and he said, “I’m going to take you back up and check again.” So I went back up. I was waiting on the trolley, waiting to go into surgery again, and my surgeon came rushing into me. I was heavily sedated, and he said to me, “Where were you born?” I said, “I was born in England.” And he said, “Well where were your parents born?” I thought, this is crazy, what is he asking me questions like this for? So, the next minute, I said, “Well my father actually was born in Romania, my mother was born in Scotland and…” “Well where were her parents born?” So I said, “Well my mother’s parents were from Poland originally. Of course my father was born in Romania, but my mother’s parents were born in Poland.” And he said, “That’s it. We’ve got it.”

Deborah could remember periods of bleeding as a child.

Deborah could remember periods of bleeding as a child.

View topic summary
SHOW TEXT VERSION
PRINT TRANSCRIPT
And did you ever have any periods of bleeding before that, when you were younger?
Yes, there was actually. That was something I forgot to mention. When I was about eleven, I had a tonsillectomy, I had my tonsils removed, and I bled. All the other kids went home the next day, and I was in hospital for about two weeks because they couldn’t stop the bleeding. It would stop and start, and eventually it was stopped and I came home. That was the first thing. And then in the fifties it was about 1956, I went in and had some surgery, appendix surgery, and I bled profusely. And I went back into surgery again and was re-stitched. He said “herringboned it” or something, something ridiculous, but I seemed to be okay after that. But I did bleed at that time, but nothing was known then about Factor XI deficiency so…

Deborahs family were all screened after her Factor XI Deficiency was discovered.

Deborahs family were all screened after her Factor XI Deficiency was discovered.

View topic summary
SHOW TEXT VERSION
PRINT TRANSCRIPT
But he insisted that my family were all screened. My husband was screened. He’s also of Ashkenazi origins, but his blood was normal. My older son’s screening was normal, just like my husband, but my youngest son was exactly like me, and it was a Factor XI deficiency of less than 1%, which is very, very low. Almost nil.
Since then I’ve discovered that there is quite a number of people in different parts of the world, some who I’ve met, have Factor 11 deficiency, but not as low as me. The last person was an American who was here. She told me she had the same thing, but she was, I think 12% or something like that, whereas I’m less than 1%. So it’s practically none. So that was the difficulty.
Previous Page
Next Page