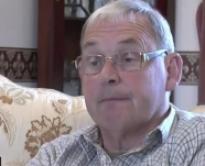 Age at interview: 65
Brief Outline: Tony has an attack of gout about once every three months. Gout has mainly affected his feet, but he has also had attacks in his knee and elbows. He manages his attacks by taking diclofenac, and generally finds that his symptoms are gone within four days.
Background: Tony lives with his wife and has two children. He is retired, and previously worked as a Corporate Banker. Ethnic background/nationality: White English.

Tony’s first attack of gout began just after he had set out on a 45 mile overnight walk with his friend. After he had walked about half a mile, he felt like his left toe was coming loose in the end of his boot. He had no idea what was wrong, but continued walking. He thought maybe his boots were causing him some discomfort. When he looked at his foot at the end of the walk, he found that his toe was bright red and swollen.

Tony visited his GP a few days later, who diagnosed him with gout and prescribed diclofenac. Tony’s symptoms went away quickly, and he had no further issues for a long time. He then suddenly began to get attacks of gout about every three months. Most attacks were in his feet, but he also had an attack in his knee, and attacks in his elbows. When Tony’s knee became swollen, painful and stiff, he did not realise it was gout, but his GP took a sample of fluid from his knee and confirmed that it was. Tony takes diclofenac tablets each time he has an attack, and they usually end within three or four days.

Tony remembers the pain as being a continual dull ache, punctuated with sharp stabbing pains. When the attacks affect his big toes, he tries to walk on the edges of his feet to keep his toe off the ground. He tries to remain active and does not stop his normal activities like playing golf. He generally finds that the pain feels less intense by the time he has played a few holes. Tony also sometimes finds prayer helpful if he is feeling low.

Tony did some research on the internet to find out more about gout. One of the facts he learnt was that gout is a form of arthritis. Now that Tony knows this, he wonders if he will be more likely to develop other forms of arthritis as he gets older.

Tony has not made any major changes to his lifestyle since he was diagnosed with gout, but believes that he is now more conscious of what he eats. At one point, the GP he saw suggested that he started taking allopurinol. Tony tried taking the tablets but after 48 hours he was in so much pain that he decided to stop. He does not like taking tablets so he is happy to continue managing his attacks by taking diclofenac unless they become more frequent.

Tony Y started getting attacks every few months in his big toe joints. He then had an attack in his knee.

Tony Y started getting attacks every few months in his big toe joints. He then had an attack in his knee.

View topic summary
SHOW TEXT VERSION
EMBED CODE
PRINT TRANSCRIPT
And can you tell me a bit about the diagnosis - what the doctor did in terms of diagnosing you?

Yeah he took one - he told me to take my shoe and my sock off, took one look at it and said - no, he pinched the toe which made me go, "Ouch" and then he said, "Oh, that's gout." And he prescribed I think it was diclofenac initially. And it went away in a very short space of time.

And then what happened next?

Well nothing for a long time. Then it suddenly started to come back, generally speaking initially in either of, either of my big toes, but only very, very sporadically, six, I don't know, it's hard to put a timescale on it really, probably every… well I would guess probably only I have three or four attacks a year. So what, probably an average of every three months. And treating it with diclofenac, I mean it was - they were over and done within days, generally speaking. Slightly different when was it, last - yeah, last year when it affected my, my knee. And I didn't believe that was gout at first because the knee was very, very badly swollen, it didn't - it didn't feel like a gouty pain, whatever that might feel like, but the doctor drew some fluid from it, sent it away, and said it was, that’s exactly what it was.

Tony felt that gout did not affect his life now. If things changed in the future, he might need daily preventative medication.

Tony felt that gout did not affect his life now. If things changed in the future, he might need daily preventative medication.

View topic summary
SHOW TEXT VERSION
EMBED CODE
PRINT TRANSCRIPT
How do you feel about the future in terms of living with gout?

I suppose you know - I'll take it as it comes. If it does become chronic, then obviously I'll have to - I'll have to think about changing the medication, because as I say you know there is absolutely - whilst we're - put it the other way round, whilst we've got these sort of, fairly short bursts of discomfort it's not - it's really not an issue, but if it were to become an issue, either develop into arthritis or whatever, then obviously I'd have to take - I'd have to review whether or not to change medication. And certainly I mean I'm not closed minded to that, but we haven’t actually got to that point at the moment. And hopefully we won't. Hopefully.

Tony thinks that some GPs still assume gout is always self-inflicted and they put too much emphasis on lifestyle as a cause.

Tony thinks that some GPs still assume gout is always self-inflicted and they put too much emphasis on lifestyle as a cause.

View topic summary
SHOW TEXT VERSION
EMBED CODE
PRINT TRANSCRIPT
I could easily see why people who aren't aware of the causes of it actually making that sort of comment, that sort of diagnosis. That I think ought to - that ought to change. Yeah. Because there's - there's an assumption as well always when you’ve sort of got - when you’ve had a bout of gout that it's - that it's down to drinking too much. That is the immediate reaction. And then you get the questioning of the, you know, “Well, how much do you drink and do you know what the guidelines are?” and all the rest of it. And that I think, I think that should change really. But I suppose what I'm implying is that people - that the GPs are…sort of unsympathetic, and maybe regard it as being a self-inflicted wound.
Previous Page
Next Page