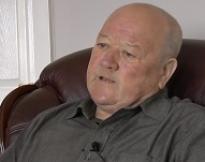 Age at interview: 67
Brief Outline: Gerald was diagnosed with gout in 1980. He has had around 12 attacks in the last 12 months which have affected his feet, ankles, knees and hands. In the past he took allopurinol, but he has recently started taking febuxostat.
Background: Gerald lives with his wife and has two children. He is retired, and previously worked as a Production Foreman. Ethnic background/nationality: White English.

Gerald has had attacks in his feet, ankles and knees, and has now started to get tophi on his hands. He believes that people who have not had gout do not realise how bad the pain is, and it affects him non-stop for 24 hours a day. At times, Gerald felt like he could not carry on any longer. On one occasion he was in so much pain that he asked his specialist to amputate his leg.

Gerald’s life has changed dramatically since he has had gout. He used to enjoy going for walks or to watch his local football team, but now finds that the constant pain makes it too difficult. Being in pain has also reduced his level of interest in doing things, but he does enjoy spending time with his grandchildren.

Some mornings Gerald’s wife has to help him to get dressed, and he has had special shoes made by the hospital to fit his feet. He was unable to get around his previous house because of the stairs. Social services arranged for some adaptations to the house, but then arranged for Gerald and his wife to move to a bungalow four years ago. Gerald is pleased with the bungalow. He still struggles to get around, but finds it much easier than he did in the house. He has a walk-in shower and wet room, and his armchairs have been raised to make it easier for him to sit down.

Having gout affected Gerald at work before he retired. His manager was not sympathetic, and Gerald was told that he would receive a smaller annual pay rise because he had had time off sick. When he was 51, Gerald could no longer continue working because of his gout attacks, and had to retire.

Gerald has tried various medications, but has not found anything that had controlled his gout. He has changed his diet after discussions with a dietician at his local hospital, but has not noticed any impact on his gout. He has attacks of gout every few weeks – around 12 in the last 12 months. Gerald is Catholic, and sometimes prays to ask for help to cope with gout.

Gerald’s GP referred him to see a rheumatologist at his local hospital. He was prescribed allopurinol, and his dose was increased over time because he was still experiencing attacks. However, by the time Gerald was taking the maximum dose of 900mg, he also had liver and kidney problems so his dose had to be reduced. About three years ago, Gerald was referred to a different consultant at the hospital who specialised in gout. In the last eight months, Gerald’s specialist has prescribed febuxostat for him to try as an alternative to allopurinol.

Gerald used to feel he could go to work or the pub when he had an attack, but no longer wants to. He feels that attacks ‘take the stuffing out’ of him more now.

Gerald used to feel he could go to work or the pub when he had an attack, but no longer wants to. He feels that attacks ‘take the stuffing out’ of him more now.

View topic summary
SHOW TEXT VERSION
EMBED CODE
PRINT TRANSCRIPT
And do you think that your experience of gout has changed as you’ve got older. Has your age made a difference to anything?

It just slows me down more. I mean, like I said to you, when I’d had it, when I was [working for the company], when I was working at least I – I used to go to work and go with it and I’d try and I’d go down the pub with it, but now I never, now with the age, no. Yeah I mean, say now, you can’t, you can’t, you don’t want to get out, you don’t want... Like when I was like forties, I’d go out, I’d put up with the pain and go down the pub and – they can laugh at me, you know, I’d go up with my open sandal on or me slipper on and I wasn’t, you wouldn’t be bothered. But now, I’d sooner sit here and just, you know. No, because it, it takes the stuffing out of you more, more now. So…

Gerald believes that when someone looks well and has no obvious injuries, other people do not think that they could still have severe pain.

Gerald believes that when someone looks well and has no obvious injuries, other people do not think that they could still have severe pain.

It makes a big difference to Gerald that his specialist is supportive and he can contact him when he needs to.

It makes a big difference to Gerald that his specialist is supportive and he can contact him when he needs to.

View topic summary
SHOW TEXT VERSION
EMBED CODE
PRINT TRANSCRIPT
The first doctor, he was a rheumatologist, top rheumatologist man. He was very, like I said, brilliant, absolutely tremendous. And then he said, “I can’t do any more,” and then he passed me over to the doctor I’m under now, and he’s a - he specialises in gout. And I – he’s that good he – I haven’t got an appointment, I mean, I’ve got a – if I haven’t got an appointment and I’ve got it, I can pick the phone up because his secretary now, I know her now, I know her by name, pick the phone up, I phone his secretary, “Hang on.” She’ll have a word with him and he’ll fit me in tomorrow or, “I haven’t got an appointment,” so, “Just come and tell them.” And he’s smashing, really, really – I said to him, “If I paid to go private, £1m a year, I wouldn’t get as good a service as that,” you know, that’s how, how good.

And does that make a difference?

It makes a hell of a difference, yeah, hell of a difference to... Because, some of the doctors – I mean, they’re all doing a job, I’m not knocking them at all, but if I’ve got an appointment to see somebody in three months’ time, then the three months is three month. But I can pick the phone up now, I could phone his secretary and say, “I’m having a bad, I’m really, really…”, and he’d see me at his next clinic which is probably tomorrow. Tomorrow or the – he’s even given me – I’ve got a number, a card with, his card and number. I can phone the day clinic up and just give them my name and they’ll have me in there and drain me off or – yeah, it makes a hell of a difference to know there’s somebody there who, is thinking, I’m not saying the other doctors aren’t, but he is, thinking about you and he’ll be there at a drop of a hat. Yeah, yeah.

Gerald thinks people often see gout as a ‘joke’ and a ‘rich man’s disease’ because they don’t know anything about it.

Gerald thinks people often see gout as a ‘joke’ and a ‘rich man’s disease’ because they don’t know anything about it.

View topic summary
SHOW TEXT VERSION
EMBED CODE
PRINT TRANSCRIPT
They look at it as a rich man’s disease and that’s what they feel, you know. If you saw gout, years and years ago, there’d be an old man there with his beard and his ‘tash and you know, well to do, with his jacket and he’d be in bath chair with a big cage over his foot. That’s, I think that’s how people look at it now, you know. And they laugh, it’s a joke, you know. “Oh gout, ha, ha,” and that’s how they look at it because it’s never been... Like school, kids in school, I bet 9 out of 10 kids have never heard of gout, in schools. It’s never been talked about in schools. You know, health or nothing like that. So it’s just a laughing subject. You know, my mates laugh at me, you know. They say, “It’s all that money you’ve got, serves you right, like.”

Gerald feels frustrated that there are few television programmes or newspaper articles about gout.

Gerald feels frustrated that there are few television programmes or newspaper articles about gout.

View topic summary
SHOW TEXT VERSION
EMBED CODE
PRINT TRANSCRIPT
It makes you frustrated really, because you never, you never put the telly on and see a programme, ‘Gout’. You never, nobody ever talks about gout, do they? Well, I’ve never seen a programme on telly anyway. You know, but you, you go up the hospital when I go up for the clinics, and how many people who do suffer with gout, but it isn’t... You know, if you have an epidemic of measles it’s the first thing on the telly, first thing in the paper or chickenpox, it’s blasted all over the place, but when was the last time you picked a paper up or whatever and you’ve seen gout? You never see it; it’s never talked about. I don’t know why. I mean, years ago, when I was a lad, you never used to talk about cancer. Cancer was never, cancer always used to be the ‘Big C’, and don’t talk about it. But that’s the same with gout, why I don’t know. I honestly don’t know.

Gerald says living with gout might be difficult, but there are people out there who want to help.

Gerald says living with gout might be difficult, but there are people out there who want to help.

View topic summary
SHOW TEXT VERSION
EMBED CODE
PRINT TRANSCRIPT
Best of luck to you, but I don’t know. I just, hang on, hang on in there because there is people out there who aren’t going to laugh at you, think it’s a joke and that’s not being sarky, not being funny. And there is people, doctors, specialist people out there who do know what you’re going through and do want, and want and want to help you. And they do help you. So it’s going to be a hard, it’s going to be a hard drive for you, a hard ride for you, but in the end there’s people there, if you get the right people, who will help you and who will put themselves out for you and they do. They do put themselves out.
Previous Page
Next Page