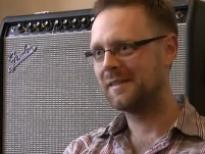 Age at interview: 34
Brief Outline: Ben had one attack of gout when he was 30. The symptoms lasted for around two weeks and he was prescribed naproxen tablets. He occasionally gets an unusual sensation in his toe and questions whether it is the beginning of another attack.
Background: Ben lives with his partner. He works as the Creative Director of a media company. Ethnic background/nationality: White English.

Ben was 30 when he experienced an attack of gout. His toe became painful and he thought that he had stubbed his toe and possibly had a fracture. He visited his GP who said that it was probably just bruised. A few days later the pain was more intense, so Ben went back to see another GP. She looked at his foot and told him that he had gout. The GP prescribed naproxen for Ben to take.

Ben took the naproxen tablets, but did not feel that they had much impact on his pain. He also tried using bags of frozen peas on his foot to reduce the pain. Ben’s symptoms lasted for about two weeks and he had to have time off work. He remembers being in agony and yelling out in pain at times. He could still drive his car, but found walking very difficult. Ben telephoned his GP Surgery and they arranged for him to borrow some crutches from his local hospital. He could not wear shoes or socks, but found that flip flops were manageable.

Ben’s dad regularly has attacks of gout, but Ben did not know much about it. He did a lot of reading on the internet to find out more. For about three months, Ben tried changing his diet to reduce foods that he thought might cause attacks. He also started to drink more water.

Ben’s attack lasted for longer than he was expecting, based on what he had read about other people’s experiences. It was two weeks before he could put a sock on his foot.

Ben still gets an unusual sensation in his toe every few months and sometimes wonders if it is the beginning of an attack of gout. On one occasion he thought that an attack might be starting, so he took some naproxen tablets and his symptoms went away. He continues to drink more water than he used to.

Ben was amazed when he found out that gout is a form of arthritis.

Ben was amazed when he found out that gout is a form of arthritis.

View topic summary
SHOW TEXT VERSION
EMBED CODE
PRINT TRANSCRIPT
And what about other people who you told when you found out you'd got gout, what were their reactions like?

They all think it's this rich man's kind of thing. So it was all, you know, they jumped to the same conclusion like, "Oh, you've been drinking the red wine or port or, you know, whatever that is." And that's everyone's assumption of it. I didn't actually know until looking into it it's a - and I think this is right, that it's a form of arthritis. Yeah. Which, which amazed me. I didn't - I didn't know that at all.

Ben recalled yelling out in pain because he was in agony. The pain was unlike anything he had felt before.

Ben recalled yelling out in pain because he was in agony. The pain was unlike anything he had felt before.

View topic summary
SHOW TEXT VERSION
EMBED CODE
PRINT TRANSCRIPT
The pain is unlike anything I have ever felt before in my life, particularly the gout attacks. I mean I remember lying in bed - we were watching TV and it just - they just come and I was just wailing in pain, you know, shouting out. It was just …

So did you find the pain sort of - was more intense at some points than others, then?

They’d just come and go, you know. You got them in the middle of the day, at night, but when they came it was absolute agony. Absolute agony.

Ben sometimes gets a stiff feeling in his toe and wonders if it is gout.

Ben sometimes gets a stiff feeling in his toe and wonders if it is gout.

View topic summary
SHOW TEXT VERSION
EMBED CODE
PRINT TRANSCRIPT
I think about it whenever I get a feeling in my toe. It sounds strange, but, I’d say, I wouldn't say regularly, but it's - it's not far away from - I don't know. You definitely - it's whenever you get a feeling in your toe. I can't really - if you've never had it, you don't really know what I'm saying, but if you've had it, you'll know exactly. You just get this, maybe a slight stiffening of the toe or something you think, "My God, is it coming back?"
Previous Page
Next Page