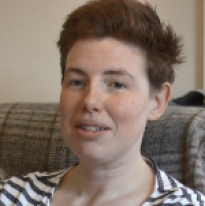 Age at interview: 35
Brief Outline: Tabitha has been a research midwife for two years. She recently finished working on a study about non-invasive prenatal testing, and she is due to start on a project about Human Papilloma Virus (HPV) treatments.
Background: Tabitha is a research midwife. She is in a relationship and has a baby. Her ethnic background is White British.

Tabitha has been a research midwife for two years. Before starting her research post, she completed a Master’s degree funded by the National Institute for Health Research (NIHR). The studentship provided her with an income and she kept her employment contract whilst studying. Tabitha conducted some of her own research and learnt more about methodologies during the Masters course, which has been useful in her job. Until recently, she was employed on a study developing a non-invasive prenatal test for chromosomal abnormalities. The study has now closed at Tabitha’s hospital site and she is due to start on a new project about Human Papilloma Virus (HPV) treatments soon.

Tabitha was drawn to research midwifery for a number of reasons. She found clinical midwifery very stressful and rushed, with little time available to provide focused care and support to pregnant women. After moving to a new location with her partner, she came across an advertisement for a research midwifery job. She hoped this would provide a better quality of life and allow her to continue working with pregnant woman, although in a different capacity. Tabitha was initially worried about the short-term nature of her research job, especially when she became pregnant. Her line manager has been making arrangements to provide her with a longer-term contract and more job security. Tabitha finds the balance between work and home has changed, and she sometimes brings work home with her. However, she likes that her research job provides flexibility and that it is quite straightforward to take time off if her baby is unwell.

Tabitha’s role included recruiting participants to the study, collecting blood samples and providing test results to individuals. She also wrote some clinical reports about the technology used and she gave a seminar at a nursing and midwifery school. Tabitha introduced herself to potential participants as a research midwife. Because she works in a hospital where there is a lot of research taking place, she found that many people were already familiar with the arrangement. At other times, she has thought potential participants have not listened or understood what this role meant. Tabitha tried to explain the study in a simple and clear way as she felt it would have been inappropriate to go into very specific details. The circumstances of the study meant that Tabitha had to approach pregnant women who had recently received news about the chances of their baby having chromosomal abnormalities, to ask them if they would consider participating in the research. She found her midwifery training and skills helped with this. For Tabitha, there was an ethical tension in the study: on the one hand, she knew that the research would develop an alternative test that many of pregnant women would not be able to afford but she also felt strongly that everyone should be offered the opportunity to take part in research.

There are some aspects of maternity care that Tabitha misses, especially those with tangible and immediate benefit to patients, and so she is thinking about doing occasional shifts in addition to her research job. She is not sure about her plans for the future but feels research midwifery has opened up a lot of opportunities, including potential lectureships.

Tabitha’s research internship gave her an overview of health research. This had proven helpful in her research midwife post.

Tabitha’s research internship gave her an overview of health research. This had proven helpful in her research midwife post.

View topic summary
SHOW TEXT VERSION
EMBED CODE
PRINT TRANSCRIPT
Yeah so I did an NIHR [National Institute for Health Research] Clinical Research Internship, when I’d been qualified about a year, 18 months. And I did that at a university under one of the professors, and that was supposed to give me an overview of the way she worked I guess, and we wrote a paper together. And then after that, because of that I guess I got onto the, one of the NIHR’s MScs so that was really good. And that was about research management, what else did I do? I can’t even remember now. And there was statistics, you know, we did a lot of quant stuff, statistics, and then we did some qual stuff as well. So I feel like I got a good insight to, into the different methodologies as well as like the overarching how you would actually do research within the NHS. And I think that has helped me enormously with my job, I just, like understanding terms and who’s who, and what it takes to get a study rolling and stuff like that. That’s been really good. And then doing my own research, I guess I already had experience of recruiting, yeah so that helped.

Being a research midwife suited Tabitha currently, but it was not something she wanted to do for a long time.

Being a research midwife suited Tabitha currently, but it was not something she wanted to do for a long time.

View topic summary
SHOW TEXT VERSION
EMBED CODE
PRINT TRANSCRIPT
No. I was no, I don’t. I think at the moment it affords me a really good work-life balance and there are lots of opportunities that come with it, especially in the project that I’ve just finished. And, you know, there was there was a lectureship that came up at [university] and the head of the course at [university] told me I should apply cos I’d been and done the seminars and stuff [baby noise]. And I didn’t because I thought my work-life balance would completely change, but I feel like that’s probably the direction I'm going to go in one way or another. Whether that’s, that means doing a PhD or not, I don’t know. I really-, I really value what I do now for the opportunities it’s given me but it’s essentially, it’s doing someone else’s research for them and I just don’t find that very interesting at the end of the day, compared to doing my own research, I just found it a lot more fulfilling I guess.

Tabitha felt that research midwives were “good value for money” in health research because of their clinical knowledge and skills.

Tabitha felt that research midwives were “good value for money” in health research because of their clinical knowledge and skills.

View topic summary
SHOW TEXT VERSION
EMBED CODE
PRINT TRANSCRIPT
I think you get someone who is used to dealing with women in pregnancy, at all different stages of pregnancy, and has the knowledge to do that. And I think you get someone with a whole raft of skills that they’ve honed whilst working clinically, so I guess it’s good value for money [laughs] compared to someone who hasn’t got any idea about the pregnancy continuum. And also I think you know a lot of the time the studies that we do, we have to flag up if somethings abnormal and refer women on, whereas how you would do that without a midwifery or an obstetric background, I don’t know.
Previous Page
Next Page