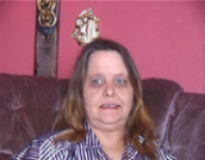 Age at interview: 51
Age at diagnosis: 1
Brief Outline: Diagnosed with epilepsy in 1953 at around 18 months old. Has tried various drugs which have not controlled the seizures. Current medication' carbamazpine retard (Tegretol Retard) and topiramate (Topamax).
Background: Not employed at time of interview; married, 1 adult child.

View topic summary
SHOW TEXT VERSION
PRINT TRANSCRIPT
But later, later on, you learn to cope with them [seizures]. You try to take the stigma away from yourself. You try to go out, which I did. I used to go swimming a lot, I used to love me swimming lessons. I used to go to swimming baths, but I always had somebody with me somebody I know, a friend that I knew, and it uh, it brought me out a little bit, going to the swimming baths.

I used to go swimming every Friday but there were always somebody there that knew me. Going a lot, you see, everybody knew me. And in fact I did have an attack at the swimming baths, I can remember while I were there, and that was in the changing room while I were there. And one of the lads that were there, he run down for me mother. And it must have been a big attack while I were there. Because he wouldn't have run down for me mother if he hadn't, if uh, he wouldn't have run down for her at all at the time. But you see everybody were considerate, they sort of knew me. They sort of knew. You see if you go to certain places all the time, people get to know you, they know who you are and if owt happens they help you. They help you, they do help you.

Discusses some of the problems she had with her pregnancy because of a seizure and high blood...

Discusses some of the problems she had with her pregnancy because of a seizure and high blood...

View topic summary
SHOW TEXT VERSION
PRINT TRANSCRIPT
Did you have any concerns while you were pregnant about the epilepsy and being pregnant?

Were you able to breast-feed him?

Sorry I did, I was in [hospital] six weeks before I had him because I had an attack. I did have an attack and me blood pressure were high, so, yes, but I did have an attack. But that's, as I said earlier, if you're doing too much, which I was doing at the time and I wasn't eating like I should have been at the time. I noticed if I didn't have no breakfast in the morning, when I was expecting, it didn't do me any good.

Were you able to breast-feed?

No I wasn't able to breast-feed him.