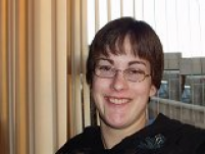 Age at interview: 22
Age at diagnosis: 10
Brief Outline: Rosie's temporal lobe epilepsy was caused by a brain hemorrhage she had as a premature baby. This also caused her to have mild cerebral palsy. She has been seizure-free for 10 months.
Background: Rosie is 22 and part-time clerical officer. She is single. Ethnic background / nationality' White British.

Rosie is 22 and works as a part-time clerical officer. Rosie was a very premature baby, born at 24-weeks of gestation. She suffered a brain haemorrhage and was given a very poor prognosis, she was not expected to survive or might never be able to learn to walk or talk. Rosie got out of the hospital in 5 months but was left with mild Cerebral Palsy and epilepsy.

She was diagnosed with temporal lobe epilepsy when she was 10. She was put on Tegretol and was seizure-free for three years. When trying to wean her off medication, the seizures came back. Rosie says this was a difficult period and that she was "in denial". She felt angry because she had hoped that she'd grown out of epilepsy. She said she felt sorry for herself for years and felt like the only person in the world with epilepsy.

Everything changed when her mum saw an ad for a local support group. Rosie went along and "hasn't looked back". She said it was a "relief" to meet other young people with epilepsy and she has made a lot of friends there. The support group helped her be happier and see her epilepsy in a very different light - she no longer sees it as a hindrance to achieving her goals life.

She has had complex partial, simple partial and absence seizures. Her main triggers are stress and lack of sleep. She also can't do sport in cold temperatures because it always gives her a seizure. Rosie's seizures are well controlled now, after a medication change and she hasn't had a seizure for 10 months.

Rosie says it takes a while to accept epilepsy diagnosis and that you can never get used to having seizures. But, in time, she has realised that, “it doesn't stop you from doing everything you did before the diagnosis”. She's planning to move away from home and buy her own flat.

Going to a local support group completely changed how Rosie saw her epilepsy and she hasn't ...

Going to a local support group completely changed how Rosie saw her epilepsy and she hasn't ...

View topic summary
HIDE TEXT
PRINT TRANSCRIPT
For about 3 years during my teens I used to always feel sorry for myself and felt as though I was the only one with epilepsy. But one day all that changed when my mum showed me a newspaper article about a local epilepsy support group that met once a month, she suggested I go and meet others with the condition, to know that I'm not on my own, and make new friends. I went to my first meeting and found it such a relief to realise that there are people out there who know how you feel. I couldn't stop talking on the way home.

This was 6 years ago now, I've made some great friends and I've not looked back since. Going to these meetings has made me view my epilepsy in a different light; more positively and getting on with life as well as being happy with the epilepsy, no longer seeing it as a hindrance in my life or in achieving goals.

I only [go] when there's something interesting on as some of their activities aren't my thing because I am the only under 25 person there and feel kind of out of place. The group mainly has speakers in and they always have a BBQ in the summer which I go to, and the arrange outings to see how things are made or go for walks.

Exercise, especially at cold temperatures, can give Rosie seizures, so she avoids certain sports.

Exercise, especially at cold temperatures, can give Rosie seizures, so she avoids certain sports.

View topic summary
HIDE TEXT
PRINT TRANSCRIPT
The only thing it occurs to me to take epilepsy into consideration is horse riding, biking, and running, as the first two cause me to start fitting below a certain temperature. And running and swimming cause me to fit every single time so I simply avoid doing those either. Otherwise it doesn't occur me to think about/of the epilepsy when doing things. Because if it did it means I'm thinking of the epilepsy as a barrier.

Rosie got the epilepsy diagnosis soon after her first seizure, based on test results and her...

Rosie got the epilepsy diagnosis soon after her first seizure, based on test results and her...

View topic summary
HIDE TEXT
PRINT TRANSCRIPT
My parents weren't told of any possible epilepsy [when she was born] but because of the brain haemorrhage that it was more than likely that I would have cerebral palsy, most likely severe quadriplegic. However it is only mild one sided, affecting my right side (hemiplegia). My parents were told that I'd be severely disabled, have quadriplegic cerebral palsy, unable to walk, talk or be any way near independent, unable to breathe on my own, probably be blind, this was all in the first 3 months of my life. Once it became apparent that I would survive the only thing they knew was that I'd be able to breathe on my own but they thought I would be blind because I didn't open my eyes until 40 weeks gestation, and the prognosis was I'd never walk or talk or be independent and have severe learning difficulties. I do have learning difficulties in association with the cerebral palsy too; but they are mild. I have problems in understanding, expressive language, understand what people are sometimes meaning

No-one expected me to live the first 12-24 hours then it was the next 48 hours, then it was the next 3-4 months they didn't expect to survive; basically they never expected me to survive at all, which doesn't surprise as premature survival at that gestation in the 1980s was almost unheard of. I was the first baby under 30 weeks to survive at the hospital so they thought of me as something of a miracle. There was no mention of epilepsy until it was diagnosed.

When I had my first seizure I don't really remember what happened in the lead up, it's all a bit blurry. I was taken straight to A&E as I was in public. The nurse then took my parents aside for a chat and I was then transferred to [town name] for overnight observation. Shortly after discharge I went for an MRI, between which time I had a further seizure that I can't remember. Consultants, after looking at the MRI results, immediately diagnosed epilepsy, and because of my medical history, it was very likely that I had epilepsy.

'I was born at 24 weeks gestation in 1984 so was very premature, and this lead to a brain haemorrhage whilst in hospital for 5 months, and later, a cerebral palsy diagnosis at 2 years. These 3 things combined were ultimately the cause of my epilepsy as have been confirmed by MRIs and EEGs.