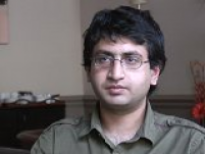 Age at interview: 28
Age at diagnosis: 15
Brief Outline: Omar was diagnosed with epilepsy when he was 15. He is on Epilim (sodium valproate) and Keppra (levetiracetam) and has very occasional tonic-clonic seizures.
Background: Omar is 28 and currently unemployed. He is single and lives on his own. Ethnic background / nationality' Asian.

Omar is 28 and currently unemployed. When he was he 15 he started having muscle jerks and twitches which gradually deteriorated. As these incidents kept happening more frequently, Omar's mum thought that all was not well and he was taken to hospital. After tests, he was diagnosed with epilepsy and put on Epilim (sodium valproate). Earlier that year, he had had open heart surgery for his underlying heart condition. Omar thinks there probably is a link between the surgery and his first seizures - to do with sedation, the surgery itself or the stress of everything. Over the years, Omar has had both tonic-clonic seizures and muscle jerks and twitches. He is currently on Keppra (levetiracetam) and Epilim and rarely has seizures, last one was a few months before the interview.

During one bad seizure Omar dislocated his shoulder which still gives him bother because the shoulder often dislocates during a tonic-clonic seizure. The main side effect from his medication is insomnia . Omar says he's found that doing exercise helps with his sleeping difficulties.

Omar says he used to be "rebellious" and live "recklessly", for example not taking his medication regularly. He didn't take his tablets for quite long periods of time and his seizures got "stronger"; he developed tonic-clonic seizures. He was also drinking heavily and eventually dropped out of college. Omar says he is now getting on with life and applying for jobs. Stopping smoking has helped with the seizures too.

Omar is very interested in politics and has run for a seat in the local elections and is also involved with anti-racist work. He admires Gandhi and Malcolm X and has done some public speaking. He emphasises that poverty and class are important things to consider in the inequalities of people's lives and life choices. In the past he's worked as a youth worker and as a journalist reviewing bands but he's not been able to get work for the past four years. Omar is passionate about arts and music and in the future would like to do writing and acting.

Omar says he drinks responsibly and knows when he needs to stop and go to bed.

Omar says he drinks responsibly and knows when he needs to stop and go to bed.

View topic summary
SHOW TEXT VERSION
PRINT TRANSCRIPT
I can drink responsibly and like I can drink quite a lot. I can handle quite a lot of drink, and I'm not just saying that because like trying to be like macho or nothing, even though I've got like an army shirt on. But it hasn't really, I haven't stopped drinking right. I was out drinking yesterday I was fine. I had three pints and three whiskies, I was out drinking on Wednesday afternoon and I had two pints of lager and I was fine. And, you know, yeah I can last quite long.

So you've not noticed'?

Omar has been applying for jobs for months. He says the application process can be depressing...

Omar has been applying for jobs for months. He says the application process can be depressing...

View topic summary
SHOW TEXT VERSION
PRINT TRANSCRIPT
I think having it, just having the form there, and then putting the application process through can be depressing that can be stressful itself. Just having to go through that process and knowing that you have to go through that process of being screened and kinda knowing how the Civil Service works as well, 'cause the Civil Service works in terms of how you, you can get a job within the Civil Service and they have to give you an interview if there's a Civil Service job up because that's what's politically correct now. But it's not like you're going to get the job but you have to apply for a job so I resorted applying for things like there's a special branch Police Clerical Assistant job up, I applied for that, it's like a thirteen page application form and I know that I'm not gonna get any response for that, I've filled in forms and three, four in a week and just heard nothing. Just done that for months at a time, doing that.

Omar says he used be to be 'reckless' and take his tablets very irregularly, so was having...

Omar says he used be to be 'reckless' and take his tablets very irregularly, so was having...

View topic summary
SHOW TEXT VERSION
PRINT TRANSCRIPT
And how long was it that you didn't take the medication at all?

I'm not sure, 'cos I'd be on and off. I'd be like, you know, there were like a few weeks I'd not take it and then think 'well I should take my pills' right my medicine ran out and then I wouldn't get a repeat prescription until I'd gone and remembered that my medicine had ran out and just gone and taken it to get another prescription. There's the whole procedural thing of having to go with that, but that just comes with it.

How did it happen that you stopped taking medication regularly? Was it just not having the routine or did you make a deliberate choice?

Just being reckless. There was like, there's being reckless and there's being rebellious at the same time, I was reckless mostly right. I knew that at times, you'd wake up like you've got a bitten tongue and you know that you've gotta take your pills, you know, so you take them. It's just the fact that it has to be every day and every twelve hours you've got to take one. And not one but, like two because your like medication's changed and then, three then, onwards.

What do you mean by rebellious?

Just being like, you've got this thing like and I don't want it anymore, you know, I don't want that in my life, I hate it. 'Cos it's just there it's like a packet, you know, it has to be popped out and taken out, you know. And now I just deal with it by putting it into the case and I suppose, it's not so big but it's still there like it's on my big shelf, like in my living room and like I keep it there and you know when I've got friends round they see it [chuckle]. So yeah if somebody new comes in they might ask a question about it. And it does say Epilim (sodium valproate) in big letters on it so kind of'

Do you feel like it made you different from your friends and from other people your age, that you had these tablets and you had to take them?

Yeah, yeah. Aye but I've still felt like, you've still got to take part. Like, still you gotta be there for like when your friends are there for you like, so you've got to be there for them.

And how did you then decide to go back on the medication regularly?

Just [organisation name] my father saw a phone number for an organisation called [organisation name], and I phoned up that number. They seemed a bit offhand and said to phone and so I was a bit insistent about it and I thought my dad had seen an advert on the TV about epilepsy. And then they gave me a number for Epilepsy Connections in [city name] and then I phoned them and then I think I was advised to also by the woman at [organisation name] this is, I was advised to phone my nurse because I was still having seizures. My seizures hadn't calmed down as well with my prescriptions so I phoned up my nurse at the hospital and got my dosage increased, so that kinda calmed things, yeah.

Omar's dad has a more 'scientific' approach and his mum a more religious outlook on life and his...

Omar's dad has a more 'scientific' approach and his mum a more religious outlook on life and his...

View topic summary
SHOW TEXT VERSION
PRINT TRANSCRIPT
Yeah, it [epilepsy] did [affect my family]. It matured my father a lot more, my father I think comes more from a sort of scientist, scientific kind of just a, a basic kind of view of life I think he takes it as it comes and he, he's quite, you know, proud of his roots. But my mum was more kinda spiritual and in the religion, in Islam they talk about things like djinns and, spirits and devils etc all exist and there's the whole sort of myth about that they're there and they exist all the time and you don't know and that they can take human form etc or they can enter a person's body and, you know, exorcism etc.

My mum would just pray a lot and she just, in fact she still, she still like, the most of the day she spends like sitting on her mat and praying like in the house like, a lot of the day.