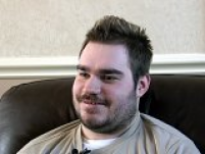 Age at interview: 24
Age at diagnosis: 12
Brief Outline: Dave was diagnosed with epilepsy at 12 and he has had both simple partial and tonic-clonic seizures. He also has left-sided hemiplegia. He is on lamotrigine 250mg twice daily, oxcarbazepine 900mg twice daily and phenytoin 100mg in the mornings and 200mg in the evenings.
Background: Dave is 24, single and lives at home with his parents. Ethnic background / nationality' White British.

Dave is 24 and does part-time voluntary work. He was diagnosed with epilepsy when he was 12. He mostly has simple partial seizures where his arm shoots up and eye wanders; they mostly happen during sleep. Sometimes these seizures manifest as what Dave calls 'hiccups' where he gets several muscle jerks after another. He had his first tonic-clonic seizure at the age of 12 and over the following 6-12 months he had one seizure every two weeks until he was prescribed lamotrigine. His epilepsy is caused by a scar that covers a large area of his brain. He also has hemiplegia which affects the left-hand side of his body.

It's been difficult to find suitable medication and Dave has gone through so many different tablets that he said at one point he felt like applying to go in the Guinness Book of Records. He is now on three medicines' lamotrigine 250mg twice daily, oxcarbazepine 900mg twice daily and phenytoin 100mg in the mornings and 200mg in the evenings.

Dave is a big Arsenal fan, has a season ticket and goes to see all the matches. He says the main things he has to look out for are sudden loud noises as that can trigger a seizure. When taking the tube or other public transport Dave says what helps him relax and calm down is listening to music on his MP3 player. He also likes to go to concerts and travels abroad a lot with his family or friends. Dave is now doing part-time voluntary work with two different organisations and is planning to start working for a third one. He hopes to have a paid job in the future and would ideally want to work in IT.

Things are improving for Dave and he is looking positively into the future. He says having two disabilities, one visible and one invisible, is just a part of who he is and there's no reason for him to think about it all too much.

Dave travels abroad a lot and makes sure he has his tablets with him. He also has a booklet about...

Dave travels abroad a lot and makes sure he has his tablets with him. He also has a booklet about...

View topic summary
HIDE TEXT
PRINT TRANSCRIPT
I have to make sure that I take my tablets with me because otherwise we really do have to, unfortunately have to come home then. I've actually, I was on an epilepsy website and I found that there was a booklet explaining about it in all different languages so I take that out with you know. If I can remember I take that out with me so if I do get a seizure someone can look at the, they can just look at the booklet. I really don't let it affect me, sometimes I might get a partial seizure on the plane like, but it doesn't really affect me.

Dave's main trigger is loud unexpected noises. Football crowds and the tube can be tricky for him...

Dave's main trigger is loud unexpected noises. Football crowds and the tube can be tricky for him...

View topic summary
SHOW TEXT VERSION
EMBED CODE
PRINT TRANSCRIPT
I know that it's mainly loud noises that set me off and so I make sure I'm clear of loud noises or that I expect you know so that I know when it's, you know like as you can imagine I'm not very good on horror movies 'cos you know, you know and all that 'oh' sort of scary stuff and loud noises, they're not really too good for me so, but, you know I just make sure I know where's there's loud noises sort of thing.

There's so many people, well it's 60,000 at the stadium now, you now and on the train the crowd can get you know, there's a lot of people, and they can easily bump into you if you're not expecting it, and that can set you off so, I'm always making sure that I'm close to mum and dad there as well so they've, they can look at me and, so that you know I don't get a seizure sort of thing. But that's when it, another symptom that could be you know if someone bumped into me so'

Yeah, crowds I'll have to watch out for, on the tube, it's not just the, football, it's if I go to a hospital appointment.

Okay. On the tube?

Yeah on the tube. Yeah the, the train I go isn't too bad, but it's mainly the tube.

For a long while since, I haven't been and dunno why, it's just started happening lately but I haven't been too confident lately to go by myself. You know if something just happens that makes you think ooh don't, I don't know what it was but something set me off, getting very nervous about going on transport on my own, but, you know I did used to do it a lot, you know, but now I've, something set off. I'm a bit nervous to get, to get on, you know I feel a bit unprotected when I'm by myself sort of thing. I survive and I grit my teeth through most of it, so I just do that you know, listen to my music so that I'm in my own element sort of thing, you know so that I can just. Yeah I just listen to my to my music so it gives me something to think about you know like the music. I can get lost in the music so I don't have to worry about all the people around me.

Is that useful for you?

The music? Yes, I find it very useful, listen to a lot of rock music so it's very useful, like I can get lost in it, and you know I don't feel so worried then.

When Dave has a simple partial seizure his arms shoots up, eye wanders and sometimes this happens...

When Dave has a simple partial seizure his arms shoots up, eye wanders and sometimes this happens...

View topic summary
SHOW TEXT VERSION
EMBED CODE
PRINT TRANSCRIPT
I've had all the partial seizures where my arm shoots up and eye wanders and I feel very shaky for a couple of minutes, sometimes it rumbles or sometimes it's just quick like that sort of thing.

Yeah, and that's over in a few seconds you said?

Yes, most of the time. I mean there's, like I said, some that rumble, but the hiccup style do start and are over in a minute, but then they rumble, literally like hiccups, but with seizures you know.

Yeah, that's a good way of describing it for someone who doesn't know.

And do you then just carry on with what you were doing or do they have a physical effect on you?

I always try and carry on, but I always do have to wait until it's gone. Sometimes I might actually do it when I'm not completely done, but I do try and get on with life you know if I've had one. I do just try and sit it or you know wait it out and then get on with what I'm doing.

Dave says it's good to go to the clinic with his mum. She talks about the medical aspects and he...

Dave says it's good to go to the clinic with his mum. She talks about the medical aspects and he...

View topic summary
SHOW TEXT VERSION
EMBED CODE
PRINT TRANSCRIPT
I go with my mum [to the clinic]. 'Cos she knows the medical side.

So do you feel like the doctors talk to you or talks to your parent?

They talk to me sometimes, they do talk to my mum a lot which actually I don't mind. I really don't mind. Nowadays I actually want mum to be there because of the medical side, and which is another thing I know I'm gonna have to know when I get older 'cos they can't come with me to the hospital for ever. But at the moment I'm happy with her coming you know she is, she tells them everything. Like they ask, talk to her about the medical side, and then they talk to me about me, myself and my feelings and what's been happening with me. It's kind of like two things for one you know they, as it were.

Yeah. Do you think they take into consideration you as a whole person like you said, that they actually ask about your feelings and how you are'?

Yes, yes. Sometimes it can be like, 'Hello I'm here,' but you know sometimes, a lot of the time it is like I'm glad she's there you know 'cos I don't know the medical side of it.

Yeah, and I think they say it's good to have somebody who sees you have seizures, because they might be able to describe it better.

That's exactly the point that mum's seen it and she knows. That is another thing about when I was saying that I feel bad, you know, I feel that I should really know the names of them and the dosage, but I just don't and they talk to mum. But I don't mind that, I'm actually quite glad when she's there, but I don't feel bad. Like I do with the driving thing, when I can't help mum and dad there, I can't really help mum at the moment with the medical side of the epilepsy 'cos I don't know the tablets names, or the dosage or whatever.

Dave says it varies how soon he tells people about his epilepsy but he usually prefers to wait a...

Dave says it varies how soon he tells people about his epilepsy but he usually prefers to wait a...

View topic summary
SHOW TEXT VERSION
EMBED CODE
PRINT TRANSCRIPT
I prefer, I will tell 'em eventually, but I'm not too sure about telling them straightaway, 'cos it's like I said, I don't wanna scare people. But at the same time, it's why I put on my profile that I've got the epilepsy because I want people to know, I'd prefer people to know, so they'd know in advance and not get scared talking to me, I mean. People I've talked to have generally been quite good they've said you know, 'Why would it bother them?' but you know. It's just that I want them to know that I've got it you know. Some, some cases I'll tell them, some cases I'll leave it for a little while and then tell them. I mean a lot of people seem to know about my other disability, my left side because of my hand, they can normally tell about my hand that I'm disabled [hemiplegia].