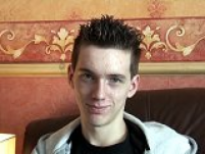 Age at interview: 19
Age at diagnosis: 11
Brief Outline: Darren was diagnosed with temporal lobe epilepsy at 11. He had neurosurgery in 2004 but the seizures came back and are now uncontrolled. He is currently on pregabalin and considering a second operation.
Background: Darren is 19, single and lives at home with his parents. He is unable to work at the moment. Ethnic background / nationality' White British.

Darren is 19 and currently unable to work. He had his first seizure when he was 11 and collapsed playing football in school. He had a couple more seizures at home the same day and was taken to hospital. He had more seizures at hospital and was  diagnosed with epilepsy. He had been having "funny moments" before but had no idea it could be epilepsy.

Darren's seizures were very frequent from the start, 2-3 times a week at worst. Both the seizures and the side effects of the medication made school work difficult and within a few of years he dropped from the top to the bottom groups of his class. This also meant he had to start from the lowest level at college. Darren was also bullied in school. All this had a big impact on him and he ended up with depression and also started self-harming. The depression got so bad that Darren ended up staying on a psychiatric ward for 3 months. Darren also attempted suicide twice, which he now describes as "cries for help".

Because his seizures were so frequent and not controlled by medication, neurosurgery was suggested to him and he decided to go for it. Straight after surgery, Darren again experienced very severe depression and was again hospitalised. Darren describes this time' “It was so bad. I've never felt so down”. Sadly at this time, his Nan died making things even harder.

Then gradually, things started to look better for him and he got out of hospital. He started to enjoy himself, go out with friends and had a good year. Unfortunately, out of the blue, the seizures came back two years after surgery and Darren describes how horrible it was to start it all over again. He's been having seizures ever since and he is now considering a second operation.

At the moment, life for Darren revolves around hospital appointments and seizures. He says he's become isolated from his friends and he also had to quit the animation course he was doing at college. He's trying to find work but says it is really difficult. Darren used to play football in a team but because some of the seizures have occurred when doing sport he says he's not very keen on doing it anymore. He enjoys drawing cartoons, playing video games and sleeping and says his dream would be to get a job in animation.

You can find Darren's video diary by clicking here.

Darren decided to have surgery because he 'had to take the chance to get rid of epilepsy'. He was...

Darren decided to have surgery because he 'had to take the chance to get rid of epilepsy'. He was...

View topic summary
SHOW TEXT VERSION
EMBED CODE
PRINT TRANSCRIPT
I was told that it was very risky. I remember sitting in the room with mum and dad just this, it was the day before I think, I had the surgery. Just been told about it, you know, how they'd like cut a piece of my brain out and like all the risks like getting paralysed on one side, even death or, all these different risks and, you know. I was really scared. But I was, you know, we had to take a chance just get rid of the epilepsy. But they said that there was a good chance that it could work as well, so that did kind of boost my confidence a bit. So yeah I did I was gonna go through with it no matter what. And I did.

Was it a difficult decision?

No I was gonna do it.

Okay, do you remember the surgery, the day before being in hospital, how you felt?

The day before, yeah, I remember walking down the corridor, mum being more scared than I was, then going in, I don't really remember staying in the actual room the day before, I remember the morning before. Like getting ready for the operation and how they had to' and now I was really scared, just before and how they had to give me what's it called? Pre-med yeah? How they had to give me the pre-med, how then I weren't scared, I was really happy then. Then I just remember trying to climb onto another bed, and that's all I remember. Oh yeah and I remember throwing up [laughs] just before and then that's it.

View topic summary
SHOW TEXT VERSION
EMBED CODE
PRINT TRANSCRIPT
Went to college, and I was still having seizures then, and they were still just like they were, they weren't as bad as school really. But I had to quit early 'cos I had depression at the end of the first college year because it was really getting to me, and other issues as well. So I went into hospital with depression , came out of there after three months to go into hospital to have the operation and spent a few days in there after the operation. But then come back out and after about a day or so, went back down with major depression, one of the side effects of it. Went back into hospital, three more months. come out, I still weren't a hundred percent there was still a chance of me going back into hospital, but I didn't in the end.

I was having a pseudo-seizures I think they're called, where you just, it's like a epileptic seizure, it's what you get when you're, like really depressed, you just kind of lose control and you just don't know what you're doing. That's what they said I was having 'cos I was like really, really down. I did actually attempt suicide a couple of times but ' nothing, nothing major.

At what point was that, before you went to hospital or?

Yeah one was before I went to hospital and, like, once in hospital as well. But nothing much really. I think they were just more cries for help.

Do you think that's what it was for you?

Did you feel like that at the time or is it different now looking back on it now sort of a couple of years later?

Two years after surgery, Darren's seizures came back and he's been having them ever since. He...

Two years after surgery, Darren's seizures came back and he's been having them ever since. He...

View topic summary
SHOW TEXT VERSION
EMBED CODE
PRINT TRANSCRIPT
Well the first one [seizure] I had, when I told my parents they just said, 'Oh probably weren't anything.' You know, like the very first one I had, I believed them. Then after that I knew that I was having fits, because it was at night time. It was different as well so I didn't really know and then, like I said the second one, I knew it was fits and 'cos it was at night time it weren't as bad but it's still fits. And it just felt horrible to know that I've been that long without seizures, and they just come back again. And, just, it was horrible.

After the operation when I weren't having them, like a year or so after I thought, you know, 'Ah, you know, they're fully gone', you know. It's worked, and then two years went by I thought, 'Yeah they're definitely gone for good now'. Then, I think it was like two years, few months and then all of a sudden I just had a fit, I don't know, okay they're not gone, and now they've been back ever since. But just get used to the fact that they're gone and then they come back, it weren't, weren't nice.

And is that the main difference is they happen at night now?

Night and day now. At first it was just night, and then, two months ago it just suddenly happened at day, I just had one during the day and now they happen night and day.

Darren was depressed and self-harming. He stayed on a psychiatric ward but didn't find the...

Darren was depressed and self-harming. He stayed on a psychiatric ward but didn't find the...

View topic summary
SHOW TEXT VERSION
EMBED CODE
PRINT TRANSCRIPT
It was all quite sudden really. It kind of dragged on I mean, I did feel quite miserable for a while but not depressed. And then, one day I just went really down and, cutting myself and then mum and dad found out and I went into hospital and just felt really bad. And I just got fed up with life, and then like, as normal people do with depression, you just hate life and all of that. You know, you feel like you're the only one with depression and epilepsy and, you feel like you're the only one that's having bad things happening to you.

How soon did your parents find out that you were self-harming?

In about a day or two, you know. They could see all the cuts on my arms and stuff. So, it weren't that long.

And did you go then straight to the hospital?

Yeah. I didn't go straight into proper care. I went into NHS care first and then, went into a proper hospital, yeah. It wasn't nice.

Do you wanna say anything more about that? You don't have to if you don't want to, what was it like in hospital?

Not much to say it just, it just wasn't nice really.

So you were then sixteen?

And you got to talk about epilepsy and was that helpful for you at all?

Not really. It's just the same as talking to anyone else about it. I didn't really find it that useful.

Recovery from the operation was hard for Darren. He was severely depressed and stayed in a...

Recovery from the operation was hard for Darren. He was severely depressed and stayed in a...

View topic summary
SHOW TEXT VERSION
EMBED CODE
PRINT TRANSCRIPT
Well emotionally it was okay whilst I was in there. Physically, I had to stay in bed most of the time which was okay, three days I think it was before I could come out. Just watched TV most of the time, just stayed in bed, watched TV, no video games, and that was it really, three days. Little by little taking off the wires, getting up and walking, just slowly recovering until I could go out again. And they said, they warned me that there could be side effects, which there was. There was the major depression, as soon as I come out of there, until which I went back into hospital for, that was another three months.

How soon did you go, after the operation?

So you were basically recovering from the operation in another hospital being treated for depression. Is it a stupid question to ask how that time was for you?

Horrible. I just, remember, going into that hospital and just crying and, 'cos it was so bad. I've never felt so down.