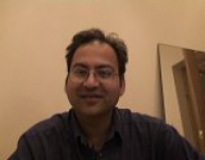 Nasir type 2 diabetes was diagnosed when he was 28 years old. Looking back he feels that he probably had some symptoms of diabetes for several years while at university, but that he had taken little notice of them. He had felt tired, thirsty and also needed to go to the toilet very frequently. Eventually his wife insisted he should see the doctor, and then the diagnosis was made, and Nasir was put on medication. He now takes gliclazide and metfomin.

Nasir feels that type 2 diabetes can be difficult to manage because it requires a lot of self-discipline, and also because the consequences of not being disciplined about diabetes are not immediately obvious. Unlike having a physically painful condition, diabetes works 'silently' so that people don't always know or feel that they are unwell. Nasir believes that if diabetes is not well-managed it can damage the body.

Nasir now misses being able to eat what he wants, especially sweet and fried food. Although he tries to exercise regularly, his time is limited because he has a full-time job and a young family. If his blood glucose levels are a bit high he feels tired which puts him off taking exercise. He has no problems with his medicines and feels his diabetes is under control. Apart from having to change his diet, Nasir says that having type 2 diabetes has not really affected his everyday life.

Nasir was diagnosed when he was in his late twenties and thought the extreme tiredness he...

Show in context
SHOW TEXT VERSION
PRINT TRANSCRIPT
Symptom-wise, again going back to what I said earlier, my ones were going to the toilet, thirst and tiredness, they were the three sort of, and I believe they're the three most common ones. And I think I probably had it for quite a few years without knowing about it, because I was, you know, feeling tired, even I would say towards the end of when I was going to university, and you'd come back really tired and stuff and, you would just think 'Oh God because I had a late night' well but it was too frequent then. Going to the toilet was a big thing, but as soon as the GP diagnosed it, you know, it was a bit of shock initially to the system because, you know, you're told you've got quite a serious condition, so there was a shock element as well. That, you know, I've got something wrong and I've got to always like be careful now and watch what I do and take all this medication. It can be, obviously you've got to watch, sometimes when you're going to people's houses there's been an occasion where I've forgot to take my tablets, and you know, you're having to miss a dose or whatever if you want to call, but you just got to be careful that when you go on holiday you obviously take enough tablets with you.

You've just got to be a bit more vigilant with everything you do, wherever you go, and sometimes I have to go down to London for business, with my office and you've got to make sure of, that you pack all your medication as well. And that's something that you've got to keep an eye on you can't just, you know, pack your bag and run and get the plane, you've got to make sure that you have everything with you. But again, you know that, in general if you watch what you're doing then they say that, you know, as long as you look after yourself, then you'll prolong the insulin or whatever for a longer period of time and then you hope maybe, you know, in ten, fifteen years they might come up with something, they could cure it.

Nasir was told his diabetes was probably hereditary but he says he's also been overweight for...

Show in context
SHOW TEXT VERSION
PRINT TRANSCRIPT
No they're not sure, they said it could be linked to hereditary because, because not my father but my grandfather had diabetes, some of my aunts on my father's side of the family have had it, so they're saying it could be linked to that because type two's not common in, you know, people at that age, age group it's usually, it comes on, you know, later life.

But were you do, well what kind of weight did you have at that time?

I've always struggled with my weight but I think at that time I was probably about thirteen stone or so which is, you know, maybe two, three stone overweight. But I did have a bit of a sweet tooth, you know, I won't lie about that, I certainly enjoy my chocolates and my drinks and stuff. But they never really came up with a definitive answer why you've got it, and I think they were just more concerned with the fact right you have got it, let's try and treat it, you know, it doesn't matter how you got it really at the end of the day, if you've got it, they didn't really go into it in too much detail about, how, why, where, you know, it came from. It would be good to know but I suppose at the end of the day it's, to a certain extent it's irrelevant how it got there it's the fact is you've got it.

Nasir goes to the hospital once a year and only goes to the GP if he has any problems with his...

Generally I'm not bad but sometimes, you know, like I say you can have your wee moments where you lose it for maybe a month or so or six weeks, and then you have to sort of drag yourself back on track. So the GPs etcetera here in [city], they've been quite good. I find that the clinic I go to, the diabetic clinic, it's at a hospital in [city] called the [hospital name], I only see them once, just once a year now. So they leave it to you to monitor it, and obviously if you've got problems go to your GP.

And in some ways I think, leaving it to yourself can be a bit more riskier because you know that, I know that my appointment's in October, then I know, two months before if I'm good, when they take my tests it'll come out okay, and although that's wrong it's just psychological you can fall into the trap where you know, that okay I've got an appointment in October right from about the end of July, August I will be good and it'll all come out okay and the doctor won't say, you know, “You've been this, that and the next thing.”

And how often do you see your doctor?

For diabetes? The GP? I actually don't see the GP about the diabetes now at all. Only if something was going wrong would I make an appointment and go and see them, but I generally find that the medication I'm on is, tends to be working and I think I know, you know, whether I've been good or bad. And from that and then from the blood test you know how it's going to impact you, and you've got your annual or bi-annual visit to the clinic really is enough.

Okay where they check you out?

Yeah they do the, you know, the A to Z of all the tests so, I think, I think with the GP it's only if something was going wrong that, you know, and felt maybe the medication wasn't working or you were being good as it were, and your sugar levels were still high, then obviously I'd make an appointment and go and see my doctor but, apart from that I probably wouldn't really.