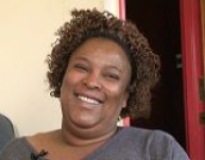 Age at interview: 43
Age at diagnosis: 33
Brief Outline: Gugu was diagnosed 10 years ago. At first she was prescribed metformin. 3 years before the interview she was transferred to insulin.
Background: Gugu works for a supported housing charity, and at the moment lives alone and has no children. Ethnic background/Nationality: Born in Zimbabwe.

Gugu has had diabetes for 10 years and is still finding it difficult to control. She wishes she had understood right from the beginning how serious the condition could become, but says that initially she was more concerned about her fertility problems than diabetes which she felt was unimportant by comparison.

She has been taking insulin for 3 years (NovoRapid twice daily; Lantus at night) as well as metformin. Gugu feels very well supported by her hospital diabetes team, and only sees her GP for checkups twice a year. She has been referred to a dietician and a nutritionist both of whom tried to help her change her eating habits. She has attended one-to-one counselling sessions at the hospital, and recently started group counselling sessions for people with diabetes.

Gugu has experienced depression on and off for many years which she attributes partly to her diabetes, and partly to recent problems at work and in her family. Both her parents have recently returned from Zimbabwe and have been diagnosed with diabetes. She realises that because she feels under pressure at home and at work at the moment she is finding it extremely difficult to eat properly or exercise regularly. She thinks that her inability to control her diabetes at the moment may be a form of self-harm or 'self-sabotage'.

Gugu was in hospital for fertility treatment when her diabetes was discovered and at first she...

Show in context
SHOW TEXT VERSION
PRINT TRANSCRIPT
I can't remember being told much about it, I was just told that, 'Okay, you're, you know.' They sort of went on to the medical jargon, you know, and telling me about the sort of like, the, the physics behind it all, or the biology behind it all and your pancreas - and I just didn't have a clue what they were talking about.

I just wanted, all I heard was well you've got this thing and it was just because, it was irritating me at that time because it's stopped me doing what I'd initially gone to the hospital for. So I was just irritated more than anything else, and I mean I don't think I really got, at that time, that much information. You know, it was more, like I said it was more like the biological reasons why one would have diabetes, but it wasn't, yeah'which I just think I needed someone to sit down and explain the impact that it could have on your life if left, one, untreated. Secondly, neglect, you know, neglect of your, you know, your eating habits and things like that, yeah.

Because I thought, 'Oh, what now?' You know, I, yeah it's just another sort of blow that I didn't really take it seriously because it didn't mean anything, do you know what I mean? I was irritated because I just didn't know what, oh God, just something else to deal with that, or will be gone in a couple of weeks' time, you know.

Gugu feels more structured help with food might help. She feels tired after work and doesn't...

Show in context
SHOW TEXT VERSION
PRINT TRANSCRIPT
You know, the, with me I'm always, I don't know what it is' I'm always somebody that I'll say, 'Okay right, what I want is.' Because I'm like, I think I'm just so busy trying to control my life, it's just so out of control, I like structure. I want structure and I want someone to say [bang] 'Eat this on Tuesday, that on Wednesday'' I feel that would work for me better than just, 'Well you know, you can eat so many of...' You know me, I'm somebody who needs' That's why I'm always watching these, I need someone like, I don't know about Gillian McKeith, but I need somebody who's sort of like, 'This is your diet, this is your sheet and what you're going to eat for today' Yeah? 'And tomorrow it's going to be like this.' And it'd be sort of weighed out and, that's me. But I can't do that myself.

I mean it's that as well, and I think I'm sort of like got a very sedentary life as well these days, for someone of my age you know. I sort of tend to come home from work - I'm tired, the journey coming back from work is like two and a half hours long - I get in, I'm exhausted. I mean, who's going to start cooking healthy options? You know, when you can get a big, fat burger out of the freezer, shove it in the bloody' You know oven and make some oven chips? You know, things that I never used to actually eat.

Gugu says that diabetes has affected every part of her life including her interest in sex and...

Show in context
SHOW TEXT VERSION
PRINT TRANSCRIPT
' I think neglect. I would say neglect of' And you know, like I said to you at the beginning, the warning signs and they were just sort of' They were easier to ignore. But when you have the diabetes now, I can try and ignore it, but it's not easy any more because its impacting on my day-to-day life, I mean it's impacting on everything. I mean even in terms of relationship, libido, everything it's just like, do you know... You just don't know. I just had no idea of all the things that, you know, it can sort of enter every part. It's not just a health thing it's...

Tell me about the libido because a lot of men have talked to me about that, but not so many women.

Well, for me, whilst I was, before I separated' I mean it was just like' it's the tired. You see the thing is maybe it was a bit of both with the thyroid thing going on and the, so I don't know which, which came first, you know what I mean, so. But yeah, just feeling, just not ever wanting to have sex again, and it's quite strange for someone who wanted a child, not to be, do you know what I mean? Even for that I just lost my appetite for it completely. But then also, I also acknowledged that I had, sort of like, heavy bleeding for two months and obviously it all goes to have an impact on relationships, you know what I mean, and the mood swings from both, or from all three things really, you know, so.

Gugu is upset that even after 10 years with diabetes she is still finding it difficult to control...

Show in context
SHOW TEXT VERSION
PRINT TRANSCRIPT
Do you know what, because sometimes I feel like my whole life is, you know' We spoke the other day at the group meeting, this woman said, 'I don't like to call myself as a diabetic. I am a first and foremost, I am a human being living with diabetes,' and she says, 'I think that we should all call ourselves that.' And I says, 'Well to be honest with you, I'm not at that stage. Diabetes is me, not me being diabetic.' Do you know what I mean? When you can't control it, I think it is you, because you go around, I mean, you're burdened with this thing that you can't, feel like you can't control, you know, so I feel I'm diabetic first and a human being after. She might feel like that, but she's had it 43 years - still out of control - but she feels now she's more come out of it as the person that she is, and she's living with diabetes. Whereas I find that diabetes is living with me. It's moved into. Yeah, it's moved into my house and it's taken over, you know. I just wish it would pay the rent [laughs].

Gugu points out that the emphasis placed by the media on diabetes and obesity sends out the wrong...

Show in context
SHOW TEXT VERSION
PRINT TRANSCRIPT
When you think about diabetes, people think [of] 'being fat', because every time they mention obesity, they mention diabetes, on the media, every single time. So obviously you interpret that everybody who is diabetic is fat... And it's not the fact that I have... I know people who are slim with diabetes, but it's just that you just get used to that image. And I think people get used to, that's what they think in their head. I'm sure if I spoke to someone on the phone and said I have diabetes, they'd think, 'Oh she must be fat, she must be obese.' Do you know what I'm saying? Because that's just all you hear these day. 'Obese - Diabetes' You know and'

And how do you feel about that? Do you feel that's a bit of a stereotype? I mean does that annoy you?

I mean I don't spend so much time thinking about it, but if I do think, I think, oh that's a bit'I think it's sending across the wrong signal because you can be diabetic and not be, it's not necessarily' I mean, obviously weight does play a part but it's not the only contender, do you know what I mean? It's not, so I just don't think I just wish people would send out the right messages about healthy eating and eating healthily no matter what size you are, you know.