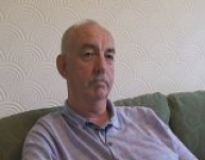 Age at interview: 54
Age at diagnosis: 51
Brief Outline: Alex was diagnosed with diabetes three years' ago. He is currently taking metformin and gliclazide.
Background: No personal details given.

Alex's type 2 diabetes was diagnosed three years before the interview. He did not worry about it much then because he had no symptoms. The diabetes did not become apparent until he went on holiday to Spain a year ago, where he had severe thirst, and needed to urinate frequently. Also, his vision became blurred and this upset him a lot. Alex had no idea then that these symptoms could be related to his diabetes. When he got back, he had some tests and was put on metformin. The doctor told him that his blood glucose had been so high that he could have gone into a coma. Once the medication began to work his symptoms eventually wore off. At the time of interview he was taking metformin and gliclazide.

Over the past seven years, Alex has developed painful peripheral neuropathy in his feet. He cannot stay on his feet for long and has lost sensation from his shins downwards. He attributes this to alcohol addiction in the past, rather than the diabetes. Sometimes, the pain is so severe that it prevents him from doing exercise, like walking, which would help with his diabetes.

For the past six months, Alex's blood glucose levels have been under control and the medication seems to suit him. Also, he is much more careful about his diet and eats regular meals with more fresh fruit and vegetables. Alex maintains an active life, and frequently socialises with friends, spends time with his children and grandchildren and does DIY.

Alex thinks his drink problems played a part in causing his diabetes.

Show in context
SHOW TEXT VERSION
PRINT TRANSCRIPT
Another problem I think it's only fair to mention as we're going into the background is that I, was going to say 'had' but probably I 'have' - I have an alcohol dependency issue. It's under control at the moment obviously I'm not drinking, so as long as I don't touch alcohol I'm fine. If I came to your house and took one drink then, I'm sorry it's 'Good night Vienna' and I'm away. And that all lasts for several months and it'll probably end up with me being hospitalised.

Well we don't need to be 'Brain of Britain' to know you shouldn't be drinking alcohol if you're diabetic, but so I've got the added problem that having the, I suppose being alcoholic and having diabetes is another concerning issue, and one I have to have a strong mental defence against, and at this moment in time it's fine, I'm glad to say. So that's another issue that goes along with the peripheral neuropathy and the diabetes. And I also had a mini-stroke back in 2002, and I don't think it's anything to do with diabetes, but it was also another problem for my' Well the ability I suppose is the best way of putting it.

Alex prefers to know what is happening to him and keep his diabetes under control and checks his...

Show in context
SHOW TEXT VERSION
PRINT TRANSCRIPT
I'm more aware of what I'm doing. And I do find that if I do more exercise than walking, it does bring it down, I don't know if there's any sort of factor there that says that's what should happen or not but it does to me. Anything physical and it will reduce it, well that's what happens. So to me it's a good thing that I'm in control of it, and it's not sitting about waiting and wondering if there's something wrong. I know twice a day if it's in control, and it has been for the last month.

Do you feel it's better this way that you actually can see what your blood sugar level?

Compared to how it was?

There's been a couple of occasions like yeah... It wasn't totally under control I can relate back to Boxing Day when I was at my daughter's house for the Boxing Day dinner, and that was [I] just probably over-indulged in the wrong things and I don't mean alcohol, I mean sweets and desserts etcetera. And it shot off the scale, it was away back up at high twenties just for one meal, but again it dropped back down within 24 hours again. So you learn then in the early stages that doing the wrong thing can affect it, which long-term will have an effect. So I prefer not to do that now, and try and keep it in check.

Alex was put on metformin and gliclazide to get his blood glucose under control.

Show in context
SHOW TEXT VERSION
PRINT TRANSCRIPT
On the medication side, it was suggested last December that I need to monitor my own blood sugar count on twice a day 'cos it was totally erratic at this time when there was no control. And at that time I was, what brought that about, sorry I missed a part, was I was on holiday, when, and this would be about last October November in 2006, when I was struck with a sensation of being constantly dry and thirsty. And, again constantly running to the toilet and that was every ten, fifteen minutes and I had no idea what was wrong with me. Until I got home and it was explained to me that it was to do with diabetes, my own GP was surprised that I didn't understand this, well it was ignorance on my part. And my blood sugar at that time was 31 on average, and I believe that the ball park figure's below 7, for a healthy individual. So there was, and there was concern at that time from my own doctors that I could have taken some kind of seizure, blackout or whatever, coma, whatever you wish to call it. And I was walking about in ignorance and that, my, well I suppose that's my fault.

However it's, the medication I was on, well put on was metformin and gliclazide I think it's called, and it's taken all of six months to get it under control and it's been that way now for the last four weeks, and it'll range somewhere between 3.5 and 7 on a daily basis. I still take the odd thing that I shouldn't take like, piece of chocolate, although I eliminated sweets as such and sugar in tea and coffee. I think I found through experience that it's not doing without it's, being reasonable with things. Except alcohol, and that's just not on. I don't have a problem with it, I don't have a problem on the medication, a few pills during the course of the day is not much to ask to keep your health in check. So overall I suppose I've been fairly lucky, and perhaps I've not had the stage of crisis yet I don't know but, I hope to avoid that.

Alex feels communication broke down when he had problems with his eyes and didn't connect it with...

Show in context
SHOW TEXT VERSION
PRINT TRANSCRIPT
But when you came and asked your GP when you came back from holiday did , how did they respond when you described your symptoms?

They were' I said earlier they were surprised that I didn't realise, now, this led to a few exchange of words to be honest with you, like, I've got no knowledge of the, the subject as such but they assumed because I'd been diabetic for a couple of years that, that I knew this. So whether it was assumptions on their part that they thought that I'd been imparted with this knowledge somewhere along the line or it had happened to me before but, it was a new experience and one I didn't really relish too much. That, that was probably the way it was meant that it was a wee bit of a surprise in their part that I didn't know what was happening to me, because I was diabetic and that I should know this. So there's [been] a breakdown somewhere in communications.

See there's the danger here that I have been told and I've forgotten about, about the situation, and I don't think I would've forgotten that, it was just , like I say I think there's been a breakdown in the communications circle, somewhere whether my GP thought this knowledge was imparted to me through the health centre service, I don't recall this happening and I'm sure I wouldn't have panicked so much if I'd known that this could've happened. I was, aye, I was frightened, I was, especially when my eyes were affected. Like I say the running into the toilet and the thirst I can cope with, but not understanding what was causing it and I didn't understand it, I really didn't associate it with diabetes, so I would suggest that I didn't know. Because I'm daft, but I'm not stupid. So yeah, somewhere along the line it didn't happen, I didn't have the information. And yeah, I'm a big boy now I can go out and find out things for myself and I didn't do it, and I never even thought about it when I was away. I had access to the internet while I was away, I could have looked but I just didn't even think about it - just didn't put the two together so...

Alex has a problem with his balance and has to concentrate hard when he is walking.

Show in context
SHOW TEXT VERSION
PRINT TRANSCRIPT
Oh yeah, so yeah I've had it for seven years and it's, I say it's getting worse but it, I think it's plateaued for about the last six months where I'm, I, you know, just a, whether it's a we've reached a pain, the part that I'm, I'm managing to live with it now and it doesn't seem to be getting any worse. And , I'm coping with it's restrictions, I'm learning to understand what the problems are and that, as I mentioned, like I said but if I walk too long, too far, I start to stumble and trip. Wee things, it's not life threatening in anyway that kind of problem but it's something I'm aware of' And, I got a problem with my balance as well which I'm not too sure what that's linked to' And example would be if I'm walking along the street and I glanced over my shoulder to, to look for oncoming traffic I'll wander off the straight line. I know it's going to happen but I keep doing it, it's, like a bit of insanity, and it's like coming to a street corner, if I don't come to a halt and then look over my shoulder, and then I'll wander away, and it's just weird it's not a major problem but it's something you need to learn to live with' And again if I was walking along the road and I looked across in the opposite side of the road that would cause the same effect. So it's, multi-tasking is out of the window when you're walking [laughs] that's basically it. So aye it's okay it's liveable.