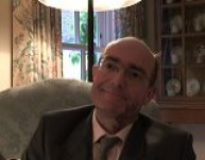 Age at interview: 53
Age at diagnosis: 48
Brief Outline: Adrian was diagnosed with diabetes five years ago. Since then lymphangiectasia (a lymphatic disorder) has also been diagnosed. He takes metformin and gliclazide.
Background: Adrian is a solicitor and is married with three children aged 20, 17 and 14. Ethnic background/Nationality: White British.

Five years before the interview, Adrian noticed that when he went on long-haul flights that he tended to have swollen ankles, so he consulted his doctor. As a result of the tests, Adrian learnt that he had type 2 diabetes, and several years later he was diagnosed with another, rarer medical condition lymphangiectasia (a disorder of the lymphatic system).

Adrian's diabetes is managed by diet and also by metformin and gliclazide. He has a private physician who works in conjunction with his GP, and advises him on what medication to prescribe.

Adrian says he was slightly overweight, but that he has lost quite a lot of weight since getting the diagnosis of diabetes. The changes he has made to his diet are mainly as a consequence of lymphangiectasia which has led him to avoid food with any kind of fat or oil content and dairy produce. Adrian's blood glucose levels are low, and he hopes that with his careful diet and lifestyle, the diabetes will continue to leave his everyday life unaffected. He has had no diabetic complications and has health checks fairly regularly.

Adrian didn't feel particularly surprised by his diagnosis because his father had had heart...

Adrian didn't feel particularly surprised by his diagnosis because his father had had heart...

I don't recall being traumatised really, at all, I know a number of people who have diabetes and who manage it perfectly sensibly and successfully, and perhaps that helped, but they we were, it just seemed to be something that was going to have an impact on lifestyle and possibly life expectation, but it was reasonably marginal. I think possibly also I was not totally surprised, because my father had had a heart disease and diabetes, they were probably connected. He probably had undiagnosed diabetes for donkey's years, but, there we are so, I wasn't altogether surprised because I can readily understand that there might well be some hereditary aspect to that.

Adrian explains that he sees his GP for diabetes care and a private consultant for lymphangiectasia.

Adrian explains that he sees his GP for diabetes care and a private consultant for lymphangiectasia.

No, no actually, it's a private consultant who I see probably now while everything's going smoothly it can come down to an annual checkup. I did see him quite regularly last year when there were various sort of complications and issues that took several months to bottom out.

That turned out to be the lymphangiectasia. Which was difficult to diagnose I gather, it's uncommon and that is what had resulted in the fluid accumulations, oh and, a chest infection, TB actually, a sort of TB, and that was by reason of the reduced antibodies. So I am in addition to the diabetes drugs I am actually currently on a course of antibiotics, well specific antibiotics for that infection, which is a two year course.

So I mean how often would you see your, physician - a consultant is it?

Well I think he is a physician actually, and I mean I haven't seen him actually for several months, simply because I've been seeing so many others. But I probably, I probably will make an appointment to go and see him again soon because of a general update.

And for the annual… I mean do you get annual checks as well for I mean do have a retina scan and…?

Oh yes, yes I do actually. Yeah, and that I do in my GP's surgery.

So how does that work? You see, you don't see the GP normally?

No. But they know that I have type 2 diabetes, and I get my drugs and prescriptions through them, and they simply put me on a list for a retina scan, scanning once a year, and I dutifully go and do it.

So who prescribes the drugs?

That, my physician then reports to my GP and suggests that he issues the prescriptions he recommends, and that happens.