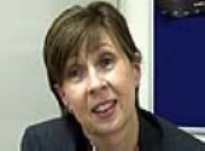 Age at interview: 54
Brief Outline: Lesley slipped and fractured her heel. She was invited to take part in a trial comparing surgery with letting the bones heal naturally. She decided not to take part because she wanted the consultant to make a decision about treatment.
Background: Lesley works as an employer engagement manager. She is single. Ethnic background/nationality' White British.

In February 2008 Lesley slipped on the steps outside her flat and hurt her foot. At first it was unclear if she had fractured anything. She was put in plaster and sent home, but then her foot started swelling and blistering, so she was admitted to hospital. Once it was established that she had fractured her heel, she was asked if she would like to take part in a trial looking at whether surgery to the heel is more effective than allowing the bones to heal naturally. There is currently not enough evidence to know which of these treatments is better and both are offered as standard treatment.
Lesley was given a DVD by the research assistant explaining the trial which she watched while in her hospital bed. She also had internet access on her bedside TV so she looked up further information as well. She felt the information was clear and she could see the need for the trial. However, for her own case she wanted the consultant to make the decision about how to treat her based on his clinical judgement and experience. She did not want the decision to be down to being randomly allocated to one group or another. This felt to Lesley as if she was being asked to make the decision herself, whereas she wanted to trust a doctor to decide on her behalf.
Once she had decided not to take part, Lesley’s consultant’s advice was to let the bones heal naturally, with rest and physio to help. Her heel is now getting back to normal eight months after the fracture, but it is still quite stiff and she still limps a bit when walking.
Lesley feels medical research is important, and recognises she has benefitted from other people’s willingness to take part in trials, but for something as serious as surgery she just felt it was too much to ask.

It was hard being asked about a trial when she was feeling shocked and worried. But she...

It was hard being asked about a trial when she was feeling shocked and worried. But she...

View topic summary
HIDE TEXT
PRINT TRANSCRIPT
I’m out of my environment. I’m in this environment, I don’t know anything. And there might have been key words that may have put me off. She may have said, you know - and you tend to think, you just hear that one word, don’t you? I don’t know. I can’t really remember now. And don’t forget this was a shock. I’d never been in hospital before, you know - lying in a bed, foot up, what’s going to happen? Work? You know, everything that’s going through your mind, you don’t really need someone to come and say to you, “Would you be part of our trial as well?” “Well, what is it?” you know. I don’t know.
On top of everything else?
On top of everything else, yes. You go through a lot, don’t you, while you’re lying there.
I mean, you are coming at someone, you know, when they are in pain and they don’t know what’s going to happen, and they’re a bit scared, and a lot of things are going through your head. I realise that’s the time you have got to ask them - or is it? I don’t know. Well, I suppose really it depends how long you’re in. I mean I was in three or four days, I’d had the scan. You know, at what point would you ask someone? I don’t know. You’ve got to ask them at the beginning, I suppose, because it’s the beginning of what’s happening to them.

When Lesley fractured her heel, she wanted to be told by a doctor what to do. She felt being in...

When Lesley fractured her heel, she wanted to be told by a doctor what to do. She felt being in...

View topic summary
HIDE TEXT
PRINT TRANSCRIPT
And then this young lady came to me from [town], she said she was from [name] University, that’s what I remembered first. Then she said she’d leave me her DVD to have a look at and would I take part in this trial? And what I remember her explaining to me was that fractured, fractures to the heel you’re never too sure, really, which way to go, whether they should do surgery or just leave it, and would I watch the DVD. And I said yes, so I did that and she left it with me. I think she came back either late that evening or the next day, and asked me if I’d take part in the trial, and that I would make the decision. And as soon as she said that I thought, “Ooh, I know nothing about this. I would rather somebody who’s a consultant or is, you know, knows this field to make the decision for me.” I didn’t, I wouldn’t have wanted to make the decision at all.
I realised that the trial was, is important and it has to be done, and for the good of everyone else, but I’m afraid I thought, “Not on me.” I know that’s sounds awful, doesn’t it? Meanwhile because you’ve got the internet access while you’re lying in a bed, I did look at quite a bit on the internet all about - and I saw lots of things which was quite interesting - but that wouldn’t have swayed me I had made up my mind that, no, I didn’t want to make this decision. I wanted the consultant to do it, and that was it, really. And I explained that to them and off she went.
I suppose in a way it wouldn’t, you’d have made the decision to take part in the trial, and then the decision about what treatment you had would have been a random decision, was that what was worrying you?
Mm, oh yes, it was like, Oh no, no. I don’t want to, you know. I’m here, and I want someone to tell me what I ought to do.” I didn’t want to have, don’t give me choices because I might make the wrong one.

She felt this was a decision she had to make for herself. The research assistant accepted her...

She felt this was a decision she had to make for herself. The research assistant accepted her...

View topic summary
SHOW TEXT VERSION
PRINT TRANSCRIPT
It’s a decision you have to make within yourself, don’t you? You really have to decide for yourself. It’s how you feel about surgery, isn’t it? If you feel, you know, if that scares you - it didn’t me. If you want to leave it to someone else, that was me, you see, so if you consider the consultant to have the knowledge or [pause] - I don’t know. It’s a decision you have to make on your own. And I didn’t have to ask anyone else, I just knew that it’s the decision I was going to make. It was my foot, my decision, my life and this was how I was going to cope with it, that was it really.
And when you made that decision and told the research assistant--
I was quite happy.
What was her reaction?
Oh, she was alright, she was fine, you know. She didn’t try and talk me out of it or anything like that. No, she just said, “Yeah, I understood”, and that was it. I did say I was sorry because, you know, obviously she was looking for a, you know, a volunteer or whatever it was but, you know. Actually, coming to think about it now, I can remember her coming into the room and I think as she was coming towards me I knew what she was going to do and I knew what she was going to say, I literally thought, “No, I’m not doing it.” So, you know.
Previous Page
Next Page