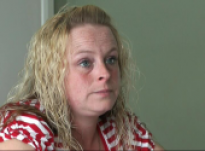 Age at interview: 36
Brief Outline: Charmaine consented for her youngest child, Courtney to receive Growth Hormone Treatment as part of a clinical trial. This was not an easy decision at the time, although now she is pleased she did. After five years Courtney has withdrawn from the trial.
Background: Charmaine, aged 36 years is White British and married with two children ages 12 and 15 years. Charmaine works part time as a Maternity Support Worker. Her youngest child took part in a clinical trial involving Growth Hormone Treatment.

Charmaine explains that it took over one year to decide whether to consent for her daughter to take part in the trial and receive Growth Hormone Treatment. After seeking information about growth hormone treatment from the internet and talking to friends, family, reading the information about the trial and talking to members of the clinical and research teams, she eventually, with her husband, agreed for Courtney to take part.
When asked why it had taken so long to make the decision, and what finally reassured her to enroll her daughter, Charmaine explains that initially she had some concerns about possible longer term side effects including abnormalities of the bone. Finally after much thought and research she says “When they reached 16 or 17, when they want to drive and they're only like four foot and they wouldn’t be able to reach the pedals do you see? You know. And your daughter or your son is going to turn round and say “Mum why didn’t you put me on the growth hormone?”” So, her daughter’s future was a primary motivation to take part. Courtney remained in the clinical trial for five years. This involved receiving daily injections using an injection pen.
Charmaine is pleased that her daughter took part. Her daughter, although still small, has caught up with her peers in terms of growth. She says that it really was easy to do and didn’t interfere with family holidays or other social events. They were always reimbursed for any travel to and from the hospital for appointments. However, she goes on to say how Courtney disliked having the injections. Eventually, after five years, Courtney requested to stop having the injections. Charmaine and her husband respect Courtney’s decision and thus have withdrawn from the trial.

It can be distressing to watch a child experience the consequences of their condition, and this...

It can be distressing to watch a child experience the consequences of their condition, and this...

Yes, yeah. And we sat down and we was looking on the internet and we was, we was just sort of like doing a bit of research really on it before we decided. And then, it, what it was like when they reached 16 or 17, when they want to drive and they’re only like 4 foot and they wouldn’t be able to reach the pedals do you see? You know? And your daughter or your son is going to turn round and say, “Mum why didn’t you put me on the growth hormone?” You know. So we done it for Courtney’s benefit really. And we done it you know, and for her like obviously being small, because

Charmaines daughter took part in a growth hormone trial for five years. It involved an overnight...

Charmaines daughter took part in a growth hormone trial for five years. It involved an overnight...

And then we was in overnight for these tests and that. And she had to have blood tests. An x-ray of her bone age and a scan of her whole body. We stayed in overnight and we came back the next day. And then she just started on them and she was having them every, every day. I tend to do it like after dinner, after tea at night so we knew and she was on them for five years.

But we had to keep going up to the hospital every six months Courtney had to be weighed and height. And then we and then she had to have blood tests as well. And then she, she’s been on them and like she came off them last year, in 2009, because she was twelve and she started High School and she didn’t want them anymore. And we just let the doctor know at the hospital.

It was helpful to have the nurses visit the home to demonstrate the injections, although her...

It was helpful to have the nurses visit the home to demonstrate the injections, although her...

And they, the lady came round to the house we were living in. And there was two of them, that one was the nurse who showed us how the injections worked and also the other lady was she’s been with us ever since like we started them. I think she was the nurse as well from the hospital. And then when it was time, when they were showing us how to do the injections Courtney didn’t like it and she didn’t want it done. So I had to like pretend and demonstrate on my stomach but it didn’t hurt, because it didn’t hurt. And then obviously she tried it and she was absolutely okay with it.

Charmaine took the injection kit on outings and family holidays, but sometimes having daily...

Charmaine took the injection kit on outings and family holidays, but sometimes having daily...

Yes and well it isn’t really. It’s a big, like for me and my husband, but it’s when, its family as well. Like if Courtney went away with the family, the injections had to come, you know? And I had to show the family what to do and how to do it. You know. And then I think the year that she left primary school they have [name of place], it’s an activity, a couple of days of activity and that. And I remember like saying, “Oh are you going on, are you going on this activity?” And like, “We’ll pay for you.” And she said, “No.” I said, “Well why?” She said, “Because I’m on growth hormone injections.” And that stopped her from going because she didn’t want; the only place that she’d ever have her injections was in her bottom. She wouldn’t have it in her tummy or, no it was always in her, in her bottom.

And did she say why that was? It was just
Because obviously with the teacher you know, doing the needle injections.

It was their daughters decision to withdraw from a growth hormone trial.

It was their daughters decision to withdraw from a growth hormone trial.

And did you ever consider withdrawing at all?

No. No.
All throughout all that time?
Yeah. Definitely we kept her on them.
I think it’s a two or three, three years like you can go on it for three years and if you want to carry on you can do and that. But we done it for five years, and Courtney like said no.
So you did your three years?
Yeah.
And then you were offered to go on it again?
Yeah.
At what point, because you did the three years, then you were offered again to carry on with the trial and the treatment. But then you decided, so did, was that a joint decision with everybody or?
It was Courtney’s decision.
Courtney’s.
Yeah. It was Courtney’s. Yeah. And then we just told the doctor when we had the appointment last October.
Mm. And how did they respond?
Absolutely fine. She said, “You’ve done it for three years so yeah, I will write to the hospital.”
Previous Page
Next Page