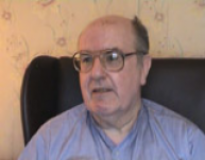 His nerve pain is much relieved by morphine patches and the anticonvulsant gabapentin.

His nerve pain is much relieved by morphine patches and the anticonvulsant gabapentin.

View topic summary
SHOW TEXT VERSION
PRINT TRANSCRIPT
The only difference today was I was on round about 16 different types of tablets between painkillers, others to stop inflammation, aspirin with special coating on it, I suppose this was to do with prevent an occurrence of this. And really none of them were doing a lot of good.

The best that could be said was that I was getting by from day to day. This went on up until about six months ago this and fortunately I'm not the type of guy to get depressed otherwise I would have been depressed a long time ago. But all that was happening to me from day to day, I was going from a state of pain into a state of dopiness, back to pain, back to dopiness.

And this was 24/7 and I was getting absolutely nowhere until a nurse, a specialist nurse in the pain clinic made the suggestion about the pain patches. And I was at the stage where I would have tried anything. So we tried the pain patches. I got a lot of relief from them. I also, they put me on gabapentin which I believe is used for people who have lost limbs to cope with the phantom pain. And between those two it's definitely been' I've still got pain, you know, I'm not going to get rid of it because I have been told I've got a lot of nerve damage on the left hand side and there's nothing they can do about that. But it's manageable now.

Eventually acknowledged that there were things that he could no longer do and planned for a new...

Eventually acknowledged that there were things that he could no longer do and planned for a new...

View topic summary
SHOW TEXT VERSION
PRINT TRANSCRIPT
But I would think, the greatest problem that I've had, and it's not been the pain. And it's not been learning to live with the pain.  It's been forgetting about the way I used to live. And just putting it completely out of my mind and starting on a clean sheet of paper. Because I just can't do any of the things that I used to do.

You know, or any of the enjoyable things that I used to do. They're way beyond my reach now. So I've really got to put them out of my mind and start afresh. And that was a major problem at the beginning with me. It took me two years, at least two years, to come to terms with that. Because I was always making a target of getting back to the way I was. It's totally unrealistic. It's never going to happen.

And the worst thing than not making a target is making a target that is totally unattainable. And that's what I was doing for two years. And I was driving myself crazy. I must admit. I was getting angry with myself for not being able to do simple things. Because inside your head you would say "Oh I used to do that, I used to do the next thing. Can't do that now". You've just got to put that out of your head and start on a clean sheet of paper. Otherwise all you're going to do is hold yourself back from progressing to any length whatsoever.

The only thing I would say to anybody that finds themselves in this state is quite simple, it really is. Forget what you used to do. Forget how life used to be. Plan for a new and different, and equally rewarding life. Because if you try and attain the old one and you have been told that it's not possibly medically.

Then you're going to be wasting a lot of time that you could put to some use, you know. Because I wasted two years at the start. And it's the only thing in this life that you can't replace, is time. Everything else is replaceable, everything.

Buys in microwave frozen meals because he often doesn't feel like cooking and worries about...

Buys in microwave frozen meals because he often doesn't feel like cooking and worries about...

View topic summary
SHOW TEXT VERSION
PRINT TRANSCRIPT
What other sort of help are you going to be getting?

They're going to be doing housework, now I've also been put in contact with a company which delivers frozen meals. Which will save me a lot of cooking. Because I've got a large freezer there and a fridge freezer so I could probably put in about a fortnight's meals at a time.

And it's, that's saved a lot as well because it can get a bit dicey at that cooker at times. When you're in a bit of pain, it won't be the first time that I've burnt myself. Now I've got round that problem as well. Instead of getting by with a cup of tea and a bit of toast because I don't feel like it I just put a meal in the microwave and that's it done.

So for every problem that you seem to hit, if you look long and hard enough, there's an answer to it. There's no such thing as a thing can't be done, it can. Maybe not the way you want it to be done, or the way you would like it to be done, but it can always be done. And that is one of the limitations that you've got to accept.

Had to give up his well paid job and now has to be very careful with money.

Had to give up his well paid job and now has to be very careful with money.

View topic summary
SHOW TEXT VERSION
PRINT TRANSCRIPT
The old saying you have to cut your cloth according to the means. I'm now in a council house. Previously I've had houses of my own with gardens. Any savings I've had have gone. Quite a while ago. Now this becomes difficult at birthdays for the children and at Christmas for the children.

Here again is where you have to change, not just your lifestyle, but the way that you look at things. You have to plan well in advance. In other words you have to save the pennies to get them any kind of present at all.  But maybe to some people it would have been a major problem but money's never been the be all and end all to me. So it really hasn't.

As long as I have enough to get by on then that's all I ever look for. But it does pose a problem, you know. You just can't get up and go places that you would like to go, because you can't basically afford them. And there is no way I'm going to rely on the goodwill of good friends because that would soon wear thin. So you have to be very careful, you know. But I'm not, I'm not looking for anything for nothing. A few people are to be quite honest.

But I do have, I do have financial problems. Anybody in the same position, I can't really see how they could avoid having financial problems. To go on a simple trip to the town centre which is roughly about a mile and a half down the road. To get there and back costs me '10. Because I have to get a taxi there and a taxi back. It's 65 pence on the bus. Which would be '1.30 for anybody else. For me '10.

And so everything you do, every journey you make. It's not only got to be planned, it's got to be necessary as well and you've got to make it count. You can't just go for the sake of going and browsing. Because you can't afford to. And that's a limit you have got to put on yourself as well. Especially when you've had an endless, shall we say expense account.